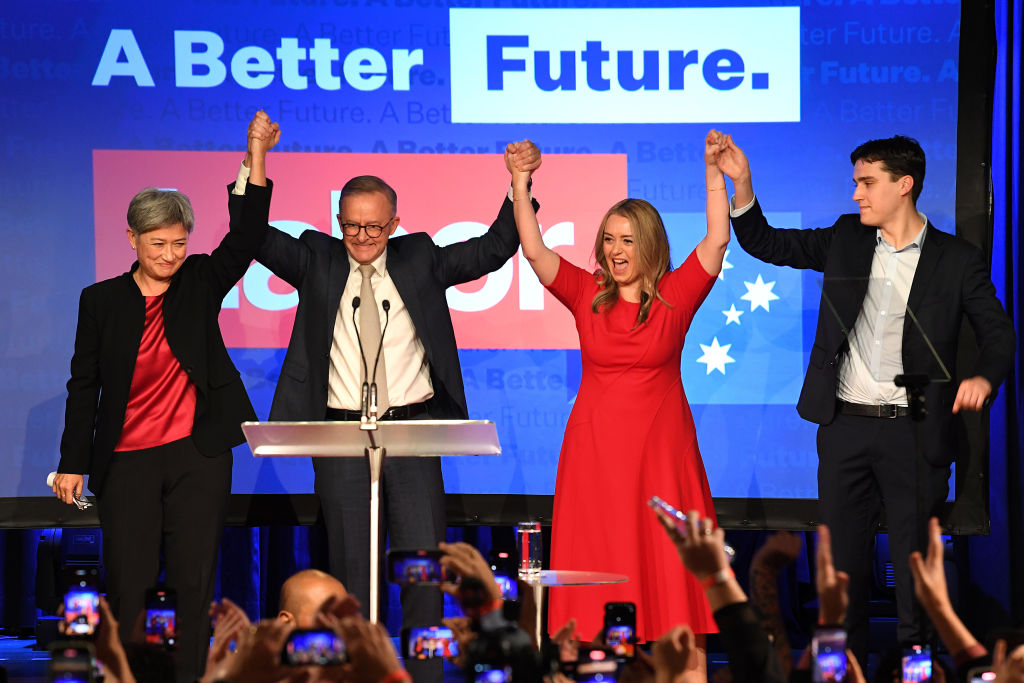 Australia’s election is full of oddities and yet it has delivered a clear governing result. Labour will be the next Australian government either with a narrow overall majority or dependent on the parliamentary support of the Greens. Furthermore, it’s been carried into power largely on the back of green votes cast for several parties. And the pledge of the new prime minister, Anthony “Albo” Albanese, to cut greenhouse gas emissions by 43 percent in 2030 and by the full net- zero in 2050—will be a politically unbreakable one, at least for a year or two. Indeed, though there are still some 14 seats where the winner is still to be decided, none of these governing certainties will change.

What, then, are the oddities? The main one is that Labour won despite both having its worst electoral performance since 1934 and getting the lowest vote for a government in Australian history. That paradox is explained mainly by the fact that the center-right Coalition of Liberal and National parties lost even more support, getting its worst result since Australia’s federation was formed in 1901.

Votes lost by the two main parties went to independents and smaller parties in large numbers. Three groups in particular did well: the Greens who currently look like rising from one to four parliamentary seats; two populist conservative parties that between them scored about 10 percent of the national vote but have so far won no seats; and as my colleague Peter Smith pointed out in an earlier election report,  some former Liberal votes in urban areas went to “so-called Teal candidates”—i.e., independents allegedly blending Liberal blue and Green in their party colors—who are in reality left-progressives on every issue but oh, so, Socially correct too.

At the latest count, an Australian friend tells me, the Liberals lost six upper-middle class traditionally safe seats to these candidates. They were exceptionally well-organized and well-financed by a sympathetic green billionaire, climate activist NGOs, and investors hoping for greater public funding for renewables. They drew support from upper-middle class women voters in particular. And they helped to unseat Liberals by picking up the despairing second preference votes of Labour voters in upper-middle-class urban areas.

There are similarities between this successful insurgent campaign and recent election results in the U.S. and Europe. Left progressives have become adept at exploiting technical opportunities in election law and organization to favor their own voting constituencies, to create new electoral coalitions on key issues such as climate change, and even to conjure up last-minute new political parties when existing Left parties have discredited themselves, as in some recent European elections. They can call on the deep pockets of high-tech billionaires with progressive views. And their conservative opponents—notably the GOP in 2020—have been left behind, sticking with traditional fund-raising and campaigning directed solely to the next election when the progressives are investing in NGOs and tax-exempt social organizations that stay around long term and change the political weather in local urban and suburban communities between as well as during election campaigns.

In reality, despite the legitimate headlines about a “Greenslide,” this Labour/Green victory was in large part a technical knock-out rather than a change of national sentiment. It even seems likely that the center-right Coalition will end up with a larger share of the national vote than Labour. Liberal and National parties did well outside the big cities where these new political technologies have not yet really penetrated.

Those rural, small town, and outer suburban votes—together with the working-class constituencies that the Liberals might go after seriously for the first time if they were sensible enough to follow Peter Smith's advice—could be the basis of a Liberal-National recovery on an electoral and social platform from any before. It would be a recovery rooted in a robust defense of free markets and a science-based civilization against the neo-medieval puritanism of the Green revolution.

Such a recovery would not lack issues. Labour will never be able to satisfy the demands of its Green allies for ever-larger cuts in people’s standard of living, let alone their aspirations for a better life for themselves and their children. The “Teals” will soon discover that their own social standing depends on an economy that their quasi-religious attitudes undermine. Labour voters will be surprised to discover that saving the world means making everything poorer, meaner, and hotter too as their air conditioning fails in the Australian climate. Altogether, the Labour/Green coalition will be rent with increasingly rancorous disputes as the result of a remarkably unfortunate historic accident.

Australia’s conversion to hard greenery is arriving at the very moment when responsible people everywhere are realizing that the costs of orthodox Green climate policy are economically destructive and that the Russo-Ukraine war makes them strategically dangerous too. To use language that should be familiar by now: Net-Zero is unsustainable. And they’ve just embraced it.

One comment on “Australians Go Walkabout on 'Climate Change'”