Atop the Magic Mountain, 'The Great Reset'

In case you're curious about what the international Left has in store for you, and just how much they despise you, freedom, personal liberty, capitalism (even though, like George Soros, they're all "capitalists"), you could do worse than to cast your eyes in the direction of the little town of Davos, high in the Swiss Alps. For a century, it was famous as the sanatorium of choice for Europe's consumptives -- sick, neurasthenic victims immortalized in Thomas Mann's masterpiece, Der Zauberberg (The Magic Mountain).

Here, in the translation of H.T. Lowe-Porter, is how The Magic Mountain begins:

An unassuming young man was travelling, in midsummer, from his native city of Hamburg to Davos-Platz in the Canton of the Grisons, on a three weeks’ visit.

From Hamburg to Davos is a long journey — too long, indeed, for so brief a stay. It crosses all sorts of country; goes up hill and down dale, descends from the plateau of Southern Germany to the shore of Lake Constance, over its bounding waves and on across marshes once thought to be bottomless.

At this point the route, which has been so far over trunk-lines, gets cut up. There are stops and formalities. At Rorschach, in Swiss territory, you take train again, but only as far as Landquart, a small Alpine station, where you have to change. Here, after a long and windy wait in a spot devoid of charm, you mount a narrow-gauge train; and as the small but very powerful engine gets under way, there begins the thrilling part of the journey, a steep and steady climb that seems never to come to an end. For the station of Landquart lies at a relatively low altitude, but now the wild and rocky route pushes grimly onward into the Alps themselves.

Hans Castorp — such was the young man’s name — sat alone in his little grey-upholstered compartment, with his alligator-skin hand-bag, a present from his uncle and guardian, Consul Tienappel — let us get the introductions over with at once — his travelling- rug, and his winter overcoat swinging on its hook. The window was down, the afternoon grew cool, and he, a tender product of the sheltered life, had turned up the collar of his fashionably cut, silk-lined summer overcoat. Near him on the seat lay a paper-bound volume entitled Ocean Steamships; earlier in the journey he had studied it off and on, but now it lay neglected, and the breath of the panting engine, streaming in, defiled its cover with particles of soot.

Once in the sanatorium, Hans becomes the ideological captive of two memorable fellow-sufferers: the Jew-turned Jesuit, Leo Naphta, and the Italian secular humanist, Ludovico Settembrini. Their prolonged battle for Castorp's soul as Europe awaits the Guns of August occupies much of the novel. And that global conflict resulted in not only World War II but the Cold War as well. Indeed, we're still dealing with its disastrous legacy.

The Left, it seems, is always itching for a fight, during which it can impose its noxious brand of vicious conformity. In the last century, it went by such names as Marxism, Communism, and National Socialism. Here's its latest incarnation:

A disciplined, well-regulated, orderly society in which all men are brothers and everybody knows his place in the Matrix, er... the system. Perhaps we now have a notion of why such ostensibly "conservative" publications such as the zombie shell of National Review have long reported -- in a very flattering way! -- about the goings-on at Davos. There's just something so darn fascinating about watching our betters disport themselves like Clavdia Chauchat and Mynheer Peeperkorn in the snows of a yesteryear that never quite was. Especially when we know the sequel.

Davos, Switzerland — A pleasure it is to write to you from the Annual Meeting of the World Economic Forum, high up here in the Alps. As you may know, this meeting takes place every January, in Davos, Switzerland — home of the Magic Mountain, site of the revered Thomas Mann novel. (And someday I’ll get through it — right after Bleak House.)

In years past, I have described Davos as a fairytale setting, or a shakeup globe. It looks this way more than ever now. When I pulled in, it was snowing, and I saw a horse-drawn sleigh. It seemed almost too ideal to be real. But real it was, and is. The pine trees (or whatever one is supposed to call them) are groaning with snow, looking like umbrellas, being folded down.

That the writer could so blithely toss off both Der Zauberberg and Dickens' Bleak House -- two of the greatest novels ever written -- says something about both the publication and the writer. If you want to try something that's hard to get through, try anything by Nobel Prize-wining author and progressive favorite Toni Morrison. How bad is she? This bad:

Don’t be afraid. My telling can’t hurt you in spite of what I have done and I promise to lie quietly in the dark -- weeping perhaps or occasionally seeing the blood once more -- but I will never again unfold my limbs to rise up and bare teeth. I explain. You can think what I tell you a confession, if you like, but one full of curiosities familiar only in dreams and during those moments when a dog’s profile plays on the steam of a kettle. Or when a corn-husk doll sitting on a shelf is soon splaying in the corner of a room and the wicked of how it got there is plain. Stranger things happen all the time everywhere. You know. I know you know.

By contrast, here is the arresting opening of Bleak House:

London. Michaelmas term lately over, and the Lord Chancellor sitting in Lincoln’s Inn Hall. Implacable November weather. As much mud in the streets as if the waters had but newly retired from the face of the earth, and it would not be wonderful to meet a Megalosaurus, forty feet long or so, waddling like an elephantine lizard up Holborn Hill. Smoke lowering down from chimney-pots, making a soft black drizzle, with flakes of soot in it as big as full-grown snowflakes—gone into mourning, one might imagine, for the death of the sun. Dogs, undistinguishable in mire. Horses, scarcely better; splashed to their very blinkers. Foot passengers, jostling one another’s umbrellas in a general infection of ill temper, and losing their foot-hold at street-corners, where tens of thousands of other foot passengers have been slipping and sliding since the day broke (if this day ever broke), adding new deposits to the crust upon crust of mud, sticking at those points tenaciously to the pavement, and accumulating at compound interest.

Fog everywhere. Fog up the river, where it flows among green aits and meadows; fog down the river, where it rolls defiled among the tiers of shipping and the waterside pollutions of a great (and dirty) city. Fog on the Essex marshes, fog on the Kentish heights. Fog creeping into the cabooses of collier-brigs; fog lying out on the yards and hovering in the rigging of great ships; fog drooping on the gunwales of barges and small boats. Fog in the eyes and throats of ancient Greenwich pensioners, wheezing by the firesides of their wards; fog in the stem and bowl of the afternoon pipe of the wrathful skipper, down in his close cabin; fog cruelly pinching the toes and fingers of his shivering little ‘prentice boy on deck. Chance people on the bridges peeping over the parapets into a nether sky of fog, with fog all round them, as if they were up in a balloon and hanging in the misty clouds.

And the beginning of The Magic Mountain -- which won the Nobel Prize for Literature in 1929 -- you can read above. 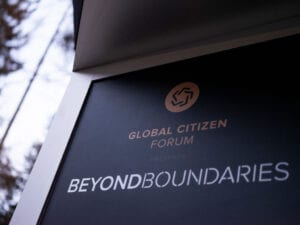 Imagine there's no countries;
It isn't hard to do.

Which brings us back to Davos and to the World Economic Forum and its plans for the peons of the world, whom they very much don't want to unite [Marxist language in bold]:

The Covid-19 crisis, and the political, economic and social disruptions it has caused, is fundamentally changing the traditional context for decision-making. The inconsistencies, inadequacies and contradictions of multiple systems –from health and financial to energy and education – are more exposed than ever amidst a global context of concern for lives, livelihoods and the planet. Leaders find themselves at a historic crossroads, managing short-term pressures against medium- and long-term uncertainties.

As we enter a unique window of opportunity to shape the recovery, this initiative will offer insights to help inform all those determining the future state of global relations, the direction of national economies, the priorities of societies, the nature of business models and the management of a global commons. Drawing from the vision and vast expertise of the leaders engaged across the Forum’s communities, the Great Reset initiative has a set of dimensions to build a new social contract that honours the dignity of every human being.

Unsurprisingly, they're ready to start right away:

Is this what you want? Is this what you voted for? Is this the life you desire? To be an admiring plaything of the Davos elite, caught like poor Hans Castorp in zugzwang at the Berghof clinic?  We've been having this same discussion for more than a century, and it always ends up in the same place. A velvet prison with plays, music, even opera. Where absolutely everyone is well treated. And where all the best people go.

11 comments on “Atop the Magic Mountain, 'The Great Reset'”