Soaring gas prices may have claimed their first victim. Sarah Bloom Raskin -- Joe Biden's nominee for Vice Chair for Supervision at the Federal Reserve -- was forced this afternoon to withdraw herself from consideration for the position.

This is because her pre-nomination calls for environmental activism among banking regulators came to the attention of the senators considering confirming her. In the past, Raskin had argued that regulators must "leave their comfort zone" and "think more imaginatively" in considering how "their existing instruments can be used to incentivize a rapid, orderly, and just transition away from high-emission and biodiversity-destroying investments." Translation: she believes they must co-opt existing laws and procedures -- using them not as they were intended to be used -- to deny capital investment in oil and gas producers and to encourage "green" investment.

When those positions came out, senate Republicans, got spooked. After all, they know that their voters are extremely concerned about the rise in oil prices and are annoyed at the decisions of the federal government that have contributed to it. Consequently, they announced their plan to oppose Raskin, making her confirmation math very tight. Democrats argued that the Republicans were irresponsibly blocking the president's Fed's nominees at a time of soaring inflation -- essentially the central bank's raison d'etre. But the ranking Republican on the senate banking committee, Pat Toomey, countered with an offer to confirm every one of Biden's nominees but Raskin. Said Toomey, “Ms. Raskin’s repeated and forceful advocacy for having the Federal Reserve allocate capital and choke off credit to disfavored industries is alone disqualifying.”

Sensing that her dream job -- a plum ten-year political appointment with limited oversight from the people's representatives -- was slipping away, Raskin changed her tune. During her confirmation hearing last week, Raskin asserted that “it is inappropriate for the Fed to make credit decisions. Banks choose their borrowers, not the Fed.” Senator Toomey joked about her about-face, saying “this is one of the most remarkable cases of confirmation conversion I have ever seen.” 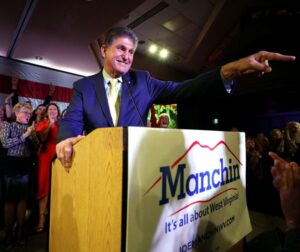 The final nail in the coffin, however, came from the other side of the aisle. After refusing to commit one way or the other, Senator Joe Manchin, the last sane Democrat, released a statement on Monday, explaining that he has "carefully reviewed Sarah Bloom Raskin’s qualifications and previous public statements" and has concluded that her "statements have failed to satisfactorily address my concerns about the critical importance of financing an all-of-the-above energy policy to meet our nation’s critical energy needs." Consequently, he would not be giving her his vote, dooming her nomination in a divided senate.

He went further, however, explaining that going forward he plans to oppose the Fed's "woke capital" drift in the hopes of restoring the bank to its intended purpose:

The Federal Reserve Board is not an institution that should politicize its critical decisions. This is a 10-year term to perhaps the most important independent body that is tasked with ensuring the stability of the American economy. At this historic moment for both the United States and the world at large, it is imperative the Federal Reserve Board preserves its independence and steers clear of any hint of partisanship. Instead, the Federal Reserve Board must remain hyper focused on ending the inflation taxes hurting working families and getting more workers off the sidelines and back into the economy. The time has come for the Federal Reserve Board to return to its defining principles and dual mandate of controlling inflation by ensuring stable prices and maximum employment. I will not support any future nominee that does not respect these critical priorities.

Hopefully some of Manchin's colleagues—even those across the aisle, on the Republican side!—recognize his good sense and similarly decide to support only nominees who understand the responsibilities, and limits, of the roles to which they're being appointed, rather than trying to hijack them on behalf of their ideological enthusiasms.