It’s starting to look as if the world is emerging, albeit slowly and reluctantly, from the utopian dream of halting and reversing climate change by policies based on almost exclusively on mitigation rather than on adaptation. These two approaches have always been the practical choice between real-world alternatives. A mixture of the two leaning mainly towards adaptation is probably the best approach since the costs of mitigation—as in achieving Net-Zero carbon emissions—are huge and its benefits either modest or unachievable.

For reasons outside the scope of this short commentary, however, the world’s governments and global agencies have placed all their money on the mitigation approach. I write carelessly “their money.” It is, of course, other people’s money. And we are gradually discovering just how much of other people’s money they are investing in climate change mitigation. Prepare to be shocked.

Thirty of the world’s biggest asset managers, which collectively oversee $9tn, have set a goal of achieving net zero carbon emissions across their investment portfolios by 2050 in a move expected to have huge ramifications for businesses globally. The group, which includes Fidelity International, Legal & General Investment Management, Schroders, UBS Asset Management, M&G, Wellington Management and DWS, said they would work with their clients to cut emissions across their investments.

That attracted the attention of National Review’s Andrew Stuttaford (full disclosure: an old friend) who devoted his regular weekly column on finance to examining how and why Wall Street decided to plunge so wholeheartedly into green ink investments. It’s a real humdinger of a column because it solves a financial mystery. 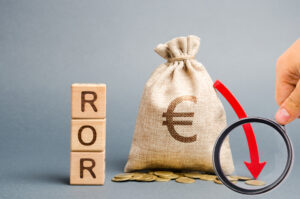 Nowhere to go but down.

After all, the purpose of investment institutions is to deliver the best return on the money that they are lent by savers and pensioners. If an investment house says that it intends to make mitigating climate change one of its main aims, it’s also telling you that your money will be getting a lower rate of return than it otherwise might. That’s a clear betrayal of the fiduciary duty that agents owe to their principals—unless they level with them and admit the likely loss.

That’s exactly what happens with other ESG funds, and I’ve no doubt that this admission will appear in the middle of the voluminous fine print which warns purchasers that socially conscious investments are likely to perform less well than the average. At the same time all the great and the good of the financial, political, and regulatory world from Al Gore to Mike Bloomberg to Mark Carney are bent on assuring nervous investors that they are making a prudent decision in going green.

Their argument boils down to claiming that any investor risks from green investments are trivial compared to the risks of investing in fossil fuels which are likely to prove unprofitable investments in a world moving towards Net-Zero and which might make those companies vulnerable to expensive lawsuits and regulatory restrictions.

The fallacies embedded in that argument were challenged by me in February last year in the first column I wrote for The Pipeline—which was a criticism of Mark Carney’s strident advocacy of strong measure of financial regulation to direct investors into the “right” green companies.

Yet if these climate forecasts are either exaggerated or simply uncertain [as they are], what is the test which would tell us with some reliability that the market demand for fossil fuels is likely to fall along with the value of companies that extract them. It cannot be the additional stress tests or capital requirements that regulators may want the banks to impose on energy companies, for then the regulators would be using their own interventions as the justification for intervening. As yet, however, non-official market participants can’t seem to see spontaneous causes for this threat to the energy sector.

But my tentative point is made more vividly and powerfully by the economist John Cochrane (quoted by Stuttaford) in an address to the European Central Bank in a reply to one of its senior executives:

Let me quote from ECB executive board member Isabel Schnabel’s recent speech. I don’t mean to pick on her, but she expresses the climate agenda very well, and her speech bears the ECB imprimatur. She recommends that,

‘First, as prudential supervisor, we have an obligation to protect the safety and soundness of the banking sector. This includes making sure that banks properly assess the risks from carbon-intensive exposures. . . .’

Let me point out the unclothed emperor: climate change does not pose any financial risk at the one-, five-, or even ten-year horizon at which one can conceivably assess the risk to bank assets. Repeating the contrary in speeches does not make it so. Risk means variance, unforeseen events. We know exactly where the climate is going in the next five to ten years. Hurricanes and floods, though influenced by climate change, are well modeled for the next five to ten years. Advanced economies and financial systems are remarkably impervious to weather. Relative market demand for fossil vs. alternative energy is as easy or hard to forecast as anything else in the economy. Exxon bonds are factually safer, financially, than Tesla bonds, and easier to value. The main risk to fossil fuel companies is that regulators will destroy them, as the ECB proposes to do, a risk regulators themselves control. (My italics.)

“A risk regulators themselves control.” I hesitate to accuse a former governor of the Bank of England, a former Vice President of the United States, and a former Mayor of New York of financial legerdemain, but I think there are laws against stock manipulation of that kind—though I doubt legislators ever envisaged fraud on the scale of nine trillion dollars.

My own advice to investors and pension fund managers is to fight shy of the “watermelon investments” recommended by the great and good. They are written in Green ink today, Red ink tomorrow.

Pretty shocking -- Politico reports on growing tensions within the Democratic coalition, with the environmental activist faction of the party objecting to even the mildest attempts by the Biden administration to confront China over its human rights violations and international aggression.

As a new Cold War takes shape between the U.S. and China, progressives fear the result will be a dramatically warming planet. Over 40 progressive groups sent a letter to President Joe Biden and lawmakers on Wednesday urging them to prioritize cooperation with China on climate change and curb its confrontational approach over issues like Beijing’s crackdown on Hong Kong and forced detention of Uyghur Muslims.

The problem for the Biden administration is that American public opinion has shifted significantly against China in recent years, such that according to a recent Pew survey, 89 percent of Americans "consider China a competitor or enemy, rather than a partner." This move began with Donald Trump calling out China's predatory trade policy and intellectual property violations before he was even president and continued through then-President Trump and Chairman Xi's trade war. It was cemented, however, by the CCP's handling of the Covid-19 outbreak last year, which, if the no-longer-a-conspiracy-theory lab leak hypothesis turns out to be true, would mean that China is responsible for the most significant man-made disaster in human history.

Which is to say Americans' anger with China is real and entirely justified such that Biden can't simply ignore it. Consequently, when the G-7's leaders met last month, the president urged them to condemn China's human rights abuses, and Secretary of State Anthony Blinken made a point of addressing the “ongoing genocide and ethnic cleansing” of China's Uyghur minority during a recent phone call with his Chinese counterparts.

But for the environmentalists, none of this really matters. They've convinced themselves that climate is the preeminent political issue, and no other consideration comes close. Many of them would even argue that American capitalism and climate change are inseparable -- even indistinguishable -- political problems, never mind the fact that, while the U.S. has led the world in total carbon emissions decline since 2000, China's new coal-fired energy capacity alone outstripped the rest of the world by 300 percent in 2020.

Like the tankies of old, who invariably defended the Soviet Union's various atrocities, the modern variety can't imagine any bad actor on the world stage aside from the United States. For them, China's signing emissions reductions pledges which they don't intend to honor is evidence that they're the good guys, while America's banning the import of a single Chinese company's solar panels over some pesky forced labor allegations suggests that we aren't taking climate change seriously enough.

Thus far in his presidency, Biden has felt it necessary to appease his environmentalist flank at every turn. But considering the burgeoning anti-CCP sentiment, will that trend come to an end? Perhaps. But the activist class is very persistent and has friends and fellow travelers in high places. My money's on their winning out and us backing down against China. Again.