As in many other countries, climate science in Canada has become both heavily politicized and cognitively polluted. Our government, like our science community, has grown thoroughly infected with faddish assumptions about climate change, the nature of greenhouse gasses, the presumed disaster of energy extraction and delivery, and the impending fate of the planet.

Though not alone in the propagation of error and pro-forma panic, former leader of the Green Party and still parliamentary leader of a caucus of two MPs, Elizabeth May has become Canada’s most prominent doomsayer. She is not only a climate zealot but a typically aspiring political autocrat who, according to CBC News, has been accused “of consolidating her power within the party through her position as parliamentary leader, and through her husband's new position on the party's federal council.” But as her husband suggests, nothing to see here, move on.

May seems to act with a self-assurance bordering on sanctimonious disregard. She had no compunction about violating a court order against blocking access to a pipeline site, for which she was charged with criminal contempt. Equally, her kookiness seems to have no bounds. May tweeted warnings about the possible dangers of WiFi which, she alleged, might be related to the “disappearance of pollinating insects.” 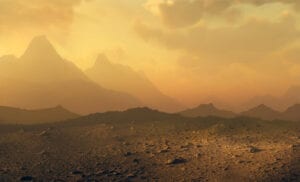 With a degree in law and studies in theology, May has a provocative knack for the lectern and the pulpit, lecturing the lost and the fallen with pontifical fervor, whether in speech or screed. Writing in Policy: Canadian Politics and Public Policy under the rubric “Climate Apocalypse Now: Venus, Anyone?” May informs us that “The alarm bells are ringing ever more loudly: We are in a climate emergency.” A brief overview of her sources and authorities will help us put her deposition in a wider, evidentiary perspective.

May relies on what she dubs “a clear and compelling warning from the world’s largest peer-reviewed science process,” the United Nations IPCC (Intergovernmental Panel on Climate Change), and summons the prestige of the UN’s General Secretary Antonio Guterres, who claims that “we are running out of time” to address an imminent climate cataclysm by reducing carbon emissions.

Following Guterres, she worries about the “low-lying island states for whom failing to meet that goal is an existential threat”—a charge that has been thoroughly rumbled, although neither Guterres nor May seem to know that—or if they do, they’re not letting on. Even the pro-warmist site ResearchGate (Global and Planetary Change) admits to the contrary that “the average change in island land area has so far been positive.” 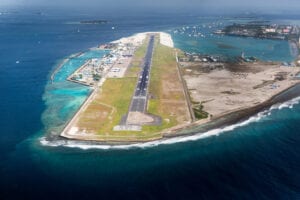 Coming in for an underwater landing at Malé.

All in all, I’m not sure Guterres is the best advocate to call upon. There’s enough wind in the man to power a wind turbine all by his lonesome. Guterres, who gives the impression of believing in “climate change” with holy zeal, is a Davos stalwart, an apologist for the corrupt, China-friendly W.H.O., and a China hack to boot.

Investigative journalist Matthew Russell Lee points to “China Energy's proven bribery at the UN, and bid to buy an oil company linked to Guterres through the Gulbenkian Foundation.” Indeed, Guterres' 2016 online disclosure “omits… his listed role through 2018 in the Calouste Gulbenkian Foundation.” The arrangement is being concluded via Partex Oil and Gas, of which the Foundation holds 100 percent of the share capital. Despite his melodramatic public pronouncements, Guterres is clearly untroubled by the (ostensible) impact of oil extraction on the environment.

As for May’s beloved IPCC, it is another apocryphal gospel. In The Delinquent Teenager Who Was Mistaken for the World's Top Climate Expert, Donna Laframboise shows that the IPCC “has been recruiting 20-something graduate students” as lead authors, many of whom had not even earned their degrees and some of whom were majoring in non-climate disciplines. The IPCC relies heavily on non-peer reviewed material (so much for May’s erroneous contention regarding IPCC peer-reviewed authenticity), including newspaper items, press releases, magazine articles, unpublished graduate theses and Green activist sources. It is nothing less than a privileged lobbying organization for vested financial interests, and anyone who consults its findings for fiscal or ideological purposes is either venal or ignorant.

Elizabeth May is a member in high standing of this troupe of contemporary climate fanatics. But she has good company in our deeply uneducated prime minister Justin Trudeau and our new finance minister, the incompetent Chrystia Freeland, who argues that “the restart of our economy has to be green”—no surprise from the political maladroit and “social justice” evangelist who bungled our NAFTA negotiations with the U.S.

Many of the major figures in the Conservative Party are also Green missionaries. They may be her competitors but they are also Elizabeth’s children, all playing the dangerous game of climate politics. As Charles Rotter writes introducing the new documentary film Global Warning, “Canada is fast becoming the leading global example for what can happen when climate politics meet traditional energy industry. It has the third largest known reserves of oil and gas on the planet and could provide affordable, reliable energy to many parts of the world… It is a country living a potentially tragic story of climate politics.”

May is also, as expected, a big fan of wind farms, urging the country to “accelerate the rapid deployment of wind turbines.” She would be better advised to consult the Members of the Ohio General Assembly, who have thoroughly exploded the wind turbine scam. After having reviewed the Icebreaker wind turbine project, placed before the Ohio Power Sitting Board, with a view to its costs, massive job losses and multiple negative environmental effects, they affirm that they “do not want this project to move forward in any form.” To mention some of their concerns: The leakage of industrial lubricants from the 404 gallons per gearbox, the tendency to catch fire, the absence of full Environmental Impact Statements (EIS) (which neither government nor industry is keen to furnish), and the inability to provide permanent jobs.

May’s glib deceptions, appeal to authority, and cynical indifference to indisputable facts is scrupulously anatomized in an email exchange with a knowledgeable opponent on the health problems associated with turbines, including sleep disturbance, depression, anxiety, exhaustion and various forms of “sick building.” May, of course, does not live in the vicinity of a wind farm and need not worry about this Aeolic species of neurological radiation.

In her conclusion, May insists that “We cannot cave into [sic] Alberta and the oil sands” but must instead follow “the brilliant lead of TransAlta’s new solar investments using Tesla batteries. We have a sustainable future within our grasp.” Here May’s ignorance is truly staggering. As The Manhattan Institute’s senior fellow Mark Mills enlightens us, “the annual output of Tesla’s Gigafactory, the world’s largest battery factory, could store three minutes’ worth of annual U.S. electricity demand. It would require 1,000 years of production to make enough batteries for two days’ worth of U.S. electricity demand. Meanwhile, 50–100 pounds of materials are mined, moved, and processed for every pound of battery produced.” The ground contamination is off the charts.

Nonetheless, we are apprised that CO2 must be dramatically reduced before Armageddon strikes. Perhaps this is not such a great idea. In Oh, Oh, Canada, William Gairdner, basing his estimates on the scientific research conducted by the Fraser Institute’s 1997 publication Global Warming: The Science and the Politics, reminds us that CO2 levels during the Ordovician Age of 440 million years ago were ten times higher than they are at present. And that the Ordovician happened to coincide with an ice age. Princeton physicist William Happer also highlights the fact that “Life on earth flourished for hundreds of million years at much higher CO2 levels than we see today.” CO2, he writes, “will be a major benefit to the Earth.” Something to ponder.

As Laframboise writes in Into the Dustbin: Rajendra Pachauri, the Climate Report & the Nobel Peace Prize, “The climate world is one in which kernels of truth are routinely magnified, amplified, and distorted—by scientists, activists, public relations specialists, and reporters—until they bear almost no resemblance to empirical reality.”

A perfect example of this strategy is May’s rhetorical question, “Venus anyone?” The surface temperature of Venus is more than 900 degrees Fahrenheit; on Earth it is approximately 58 degrees. The atmospheric mantle of Venus consists of approximately 97 percent carbon dioxide, Earth’s approximately 0.4 percent, lower by a factor of around 245.

But then, who knows what may happen in another trillion years or so. Elizabeth May and her ideological cronies might well be vindicated.