How miserable to you have to be in order to find the raincloud in every sliver lining? This miserable:

After decades of bureaucratic delays, corruption and resistance from environmental groups, sea walls designed to defend Venice from “acqua alta,” or high water, went up on Saturday, testing their ability to battle the city’s increasingly menacing floods.

By 10 a.m., all 78 floodgates barricading three inlets to the Venetian lagoon had been raised, and even when the tide reached as high as four feet, water levels inside the lagoon remained steady, officials said.

“There wasn’t even a puddle in St. Mark’s Square,” said Alvise Papa, the director of the Venice department that monitors high tides.

Had the flood barriers not been raised, about half the city’s streets would have been under water, and visitors to St. Mark’s Square — which floods when the tide nears three feet — would have been wading in a foot and a half of water, he said. 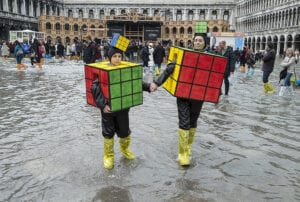 So, good news -- right? Not so fast. At the New York Times, the Pravda of America, there can be no upside to the idea that mankind, blessed with inventiveness and determination, can overcome natural elements and triumph over them. It's not only regrettable, but bad form.

Imagine waking up every day and asking yourself, "how can I spin a positive news story -- such as the potential rescue of one of Western civilization's greatest treasures -- and convince our gullible, guilty, fearful, timorous, locked-down readers in their lonely Upper West Side apartments to hate this development?"

It's easy if you try. Having delivered the good news -- San Marco is not underwater -- the Times drags in a history of the sea wall project, merrily observing that "the mobile barrier system was delayed by cost overruns, corruption, and opposition from environmental and conservation groups." There were huge cost overruns, plus a characteristic Italian bribery scandal.

Further, system is not fully operational yet -- that is slated for the end of next year -- but when it is, the gates will go up whenever high tide level reach four feet, and are expected to protect the archipelago city from water levels as high as ten feet.

But... there's a but (as you knew there would be with the Times and the "but" has to do with not "racism" but -- "climate change"! So without further ado, bring on the hypotheticals and the counter-factuals:

“With climate change, there’s a chance that the floodgates could be employed 150-180 days a year, becoming an almost fixed barrier and severing the lagoon’s relation to the sea,” said Cristiano Gasparetto, an architect and former provincial official who has long opposed the project.

“If the lagoon is cut off from the sea for long periods, it dies, because the natural exchange of waters stops, and all of its organic life risks decaying,” he said. “If the lagoon dies, Venice dies,” he added. “It loses its characteristics.” Concerns also remain about the costs of maintaining the floodgates and potential damage from saltwater. 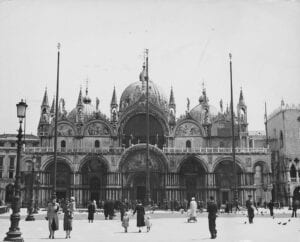 Of course they do. In Times-land, there are always "fears" and "worries" behind every new development, no matter how ostensibly good.  Like the Dreaded Covid, "climate change" is another, almost wholly imaginary terror that can't be seen, can barely be detected, and will end the world if left unchecked by the power of government in , , years or maybe five minutes if we don't do something right now.

On the hard Left, where the Times has unabashedly been squatting for the past several years, the perfect is always the enemy of both the good and the good enough. Under current leftists thought processes, if it might not be work in the direst, barely foreseeable calamity, there's no point in doing it at all.

No wonder the Left loves the lockdowns so much.