The song “Hotel California” warns: “We are programmed to receive/ You can check out any time you like/ But you can never leave...”

Residents of California have a different, view. They are not only checking out, but they are leaving for elsewhere in significant numbers. In 2019 California was the “fourth-ranked top out bound state”  (691,000 left last year, and the exodus shows no sign of abating. You can check out—and people and businesses increasingly  are-- but moving out of the state is getting more and more expensive because so many people are doing it .

One indication of this is the U-Haul truck rates. U- Haul moving truck rental rates from San Francisco to Austin, Texas  have more than doubled and are five times the difference from a trip in the opposite direction. A similar pattern from Los Angeles to Austin is reflected in the moving truck rental fees.

Ignoring his state’s shortage of electric capacity and rolling blackouts, the massive wildfires caused by his mismanagement and the economic devastation caused by his Covid-19 lockdowns this week, governor Gavin Newson ordered that by 2035 it would be phasing out all gasoline-powered cars.

Like all the political figures in this one-party state, he’s under the thumb of an aggressive environmental lobby, which has seemingly persuaded him that such a move would mean a job boom for the 34 companies in California, which produce electric vehicles. 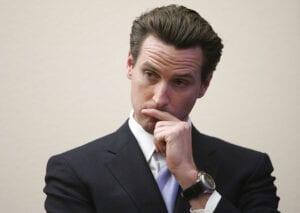 Plenty of room at the Hotel California?

Demand for such vehicles is very low, and they cost a great deal more to purchase. “Zero-emission vehicles in 2019 made up only about 2% of the cars on California’s roads, 560,000 out of more than 28.4 million.”

Given the present housing patterns and transportation systems in California, and the fact that people are already having difficulty during blackouts to charge these cars, the mandate for more of them seems preposterous.

Since California is such a big market, many of its more onerous regulations, based on the fantasy of anthropogenic climate change tend to be voluntarily accepted by manufacturers, throughout the country, something the President has been fighting by refusing to grant waivers for standards that exceed those set nationwide:

California has already pledged to not buy cars for government fleets from automakers that spurned its clean car deal, including General Motors, Fiat Chrysler and Toyota. And at a meeting with the California Transportation Commission last year, Nichols spoke vaguely of “potentially looking at things like fees, taxes and bans on certain types of vehicles and products.”

But Nichols’ prewritten remarks, obtained by Bloomberg, were starker, saying that federal clean car rollbacks could prompt the air board to look for other ways to curb pollution, including “an outright ban on internal combustion engines.”

At the time, Meredith Hankins, then a Shapiro fellow in Environmental Law and Policy at the UCLA School of Law, told CalMatters that such a ban would be difficult to get past the federal Environmental Protection Agency.

“It may be sort of dead on arrival under this current administration,” Hankins said last year. And going around the EPA is “an untested legal question.”

Under the Clean Air Act, California must receive permission from the US EPA in the form of a waiver to implement clean car rules that differ from the federal government’s. And this would be no exception, said Ann Carlson, an environmental law professor at the University of California Los Angeles.

“So the policy is highly dependent on who is elected President,” Carlson said. Trump’s  EPA already has revoked the waiver for California’s tailpipe greenhouse gas standards, which California is fighting in court. “There’s no chance he’d grant an even stronger one,” Carlson said.”

California greenies are fighting for more than one kind of climate change, it seems, one that would subject us all to the dictates of an ever more aggressive green movement in that state. As for the direction California’s rules are designed to head, it looks to me quite obvious: a state free of that troublesome middle class and those small businesses —a  depopulated state with a smaller much richer population and bigger businesses served by those too poor to be able to leave.

California’s most productive residents and companies are changing in ever larger number for a different climate than Newsom’s and the state’s legislators mandate, places free of such fantastical thinking.