Maybe I’ve got the date wrong, but although the Biden presidency doesn’t actually start for another ten weeks on Inauguration Day, January the 20th, its more progressive supporters are already ordering guillotines and tumbrils for the following day. That’s a metaphor, of course, even though the noisy Portland wing of the quiet revolution did erect a guillotine in the suburbs and even guillotined a teddy bear (“Teddy” being the Mayor’s name) on it while in Seattle the social justice warrior crowd wrote “Guillotine Jenny” on the walls (Jenny being the name of Seattle’s Mayor.)

If that were the extent of the outrages, we might put it down to high spirits (though the Seattle and Portland mobs never seemed especially jolly, and they left real victims of their street theater injured and hospitalized after the curtain fell). But the theme of purging and punishing the pre-November criminals of “the Trump regime” (the Trump administration to the rest of us) is being taken up by outwardly more respectable people. 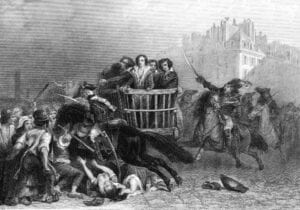 On the way to meet Le Rasoir National.

And it can’t be explained solely by the joy of “liberation” that has seemingly gripped the mass media and the political class since the networks proclaimed Biden president. It started well before the election campaign. Back in the summer a group of about 100 Democrats and Republican Never-Trumpers from politics, the media, and academia met over several days “to conduct simulations of the 2020 presidential election . . . out of concern that the Trump administration may seek to manipulate the results.” As I argued in National Review, it was largely an exercise in promoting the fear that Trump would unconstitutionally seize power while actually laying out a scenario as to how the Democrats could do so. So it was both an exercise in Freudian projection and a leftist wet dream.

But it became more sinister in an appendix when it discussed how a victorious Left in a Biden administration would deal with the remnants of the Trump administration after taking power. The gathering didn’t reach a decision on which actions to take against Trump family members or senior administration officials—understandably so since many of those sitting around the table might themselves be vulnerable to similar political reprisals one day.

What, though, about the broader Trump movement and the Republican party? Here the Transition Integrity Project was shockingly candid in that oddly impersonal language the Left likes to use when proposing its own crimes:

More broadly, there needs to be a robust, intentional, and specific strategy to challenge the white supremacist and extremist networks that enabled Trump’s rise to power and were in turn enabled by Trump’s administration. This base will not automatically demobilize if and when Trump leaves office, and it is inimical to the kind of pluralist democracy the founders intended.

That was before the election, and it was written in the appendix to a document that few people were likely to see and which was designed to attack an administration rather than to urge it on to greater efforts. Since the election the sound has been turned up, and the message is clearer and less subtle. Here are a couple of examples in recent days:

“We have to burn down the Republican Party, we have to level them, because if there are survivors, they will do this again”

No. For God’s sake please stop this 💔

Alexandria Ocasio-Cortez, re-elected as a Congresswoman, urges people to start preparing briefs for the prosecution right away:

Is anyone archiving these Trump sycophants for when they try to downplay or deny their complicity in the future? I foresee decent probability of many deleted Tweets, writings, photos in the future

There’s even now a new website, titled the Trump Accountability Project, which has issued a statement of principles for holding Trump veterans to account as follows:

Those who took a paycheck from the Trump Administration should not profit from their efforts to tear our democracy apart. The world should never forget those who, when faced with a decision, chose to put their money, their time, and their reputations behind separating children from their families, encouraging racism and anti-Semitism, and negligently causing the unnecessary loss of life and economic devastation from our country's failed response to the COVID-19 pandemic.

It's slightly embarrassing, I suppose, that the very first example of Trump perfidy that the statement selects—putting children in cages—has already been exposed on Twitter (with the evidence of photographs) as a program launched and implemented by the Obama administration. And the group’s website suggests that it’s little more as yet than a bright idea. But it’s already spreading across the internet like Covid-19; it’s guaranteed to get generous funding via all the groups advertising it; and to judge from the Twitter responses to Rubin,  Ocasio-Cortez, and others, there’s a large audience of Robespierres and Madame Defarges out there at the foot of the guillotine. 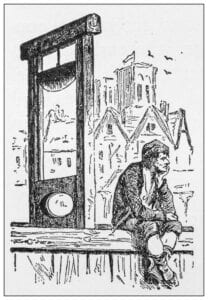 My suspicion is that a new Southern Poverty Law Center has been launched with all that means for the criminalization of political differences, the destruction of innocent people’s reputations, the promotion of guilt by association . . . this time with the Republican party, and the making of large sums of money from the sins of calumny and detraction. All that’s in doubt is whether the Lincoln Project will be able to clamber aboard the bandwagon and, if it does, whether it will have to sit at the back of it.

Well, the Republican party can take good care of itself, and probably so can Donald Trump, though he won’t have the protective phalanx of media and Big Tech protesters that have surrounded Joe and Hunter Biden since their scandals broke. What should worry moderate liberals and Democrats, however, is that the crimes for which Trump veterans will be supposedly held accountable don’t seem to have been passed into law by Congress or state legislatures as yet. They cover a great many issues that until now have been treated as matters of legitimate political, scientific, and moral debate, including such rarefied offenses as being skeptical about climate change.

That’s a crime that would imprison a great many dedicated scientific researchers as well as destroying the big oil companies and maybe entire industries without any idea of how to keep the world warm or air-conditioned in the perhaps long interval before someone makes a series of vital technical breakthroughs. Ms. Ocasio-Cortez has already notified Shell in a tweet that she will hold the oil company accountable for the  production and consumption of fossil fuels in the last few decades.

I’m willing to hold you accountable for lying about climate change for 30 years when you secretly knew the entire time that fossil fuels emissions would destroy our planet 😇 https://t.co/ekj1Va1Cp0

The awkward fact is that the oil companies were going about their business with the support and legal protection of both American political parties. Moreover, governments of both parties not only gave subsidies to fossil fuel companies but also lived on their immoral earnings through taxation. Any prosecution of members of these criminal governments would have to include people like President Obama and the Clinton family.

No legal system worth the name allows selective prosecution on political grounds, and that should protect the more obvious civil rights of former government officials such as not being fined or imprisoned for non-existent offences. But we have recently seen selective law enforcement in Seattle and Portland, and we can’t rule out that this might spread upwards from the police to the courts, especially since the Trump accountability vigilantes intend to go after federal judges appointed by the current President too.

Legal prosecutions may not be needed, however, if the sans culottes are content with punishing the Trump veterans—as some say they are—by dismissing them from jobs, removing their ability to use social media, preventing their access to college or scholarships, making the expression of their political opinions unlawful by expanding the range of the legally unsayable, removing certain scientific disciplines (e.g., biology, military research, police education) from the availability of government finance, and in general by creating a new “unprotected class” in law and bureaucratic practice.

The first amendment, if it survives, would prevent government doing many of these things, but again, as we have seen recently, corporations, colleges, the media and Big Tech have done them all the same. And the chances of expanding civil rights legislation to cover Trumpian political opinions doesn’t seem likely to be a high priority for the presumptive Biden-Harris administration.

Yes, this is a worst case scenario, I concede. But the nature of revolutions is that they go faster and further than anyone expects at the start—and especially than the moderate revolutionaries and their “enablers” expect. Their revolutionary doctrines spread from the narrow field of politics to almost every category of work and social life. And the classes of those suspected of being enemies of the revolution spread too until they include more and more of the revolutionaries themselves -- shortly after which the revolution either collapses or becomes an undisguised despotism.

So spend a hour or two on Twitter and then tell me: where's the bright side?