As Clarice Feldman has explained here at The Pipeline, the Wall Street enthusiasm for ESG (environmental, social, and governance) investing is already starting to wane. Which means the greens will go back to the drawing board, and will bring it back again under a new name. ESG is mostly a cover for "climate change" and social-justice activism, and as such its real agenda is to divert private capital to politically-favored causes, such as “green” energy and disguised redistribution schemes benefitting favored client groups like Black Lives Matter.

Investment funds that follow the ESG mantra are suffering from sub-par investment returns, and suddenly fear shareholder lawsuits for failing their fiduciary duty to maximize returns. Moreover, the attempt to enshrine ESG by regulation through the Securities and Exchange Commission (SEC) is running into political opposition on Capitol Hill and appears vulnerable to legal challenge. Suddenly the biggest boosters of ESG investment, and especially de-investing in oil, natural gas, and coal production, are backtracking, with J.P. Morgan CEO Jamie Dimon telling Congress last week that cutting off credit to fossil-fuel production would be “the road to hell” for America. Late in the week the state of Louisiana announced that it was pulling all of its assets invested with BlackRock, one of the prime cheerleaders of ESG. 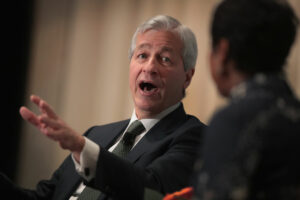 ESG is likely to persist, however, on account of its unseriousness and malleability. Several traditional domestic oil producers, like heavy fracking user Diamondback Energy, have received high ESG ratings from the third-party gatekeepers of ESG seals of approval through the simple expedient of buying “carbon offsets” and pledging themselves to be fully carbon-neutral . . . someday. Think of it as the environmental version of St. Augustine’s famous intercessory petition, “Lord, make me chaste—but not yet.”

ESG should be regarded as the third iteration of the left’s attempt to co-opt corporate America, which they otherwise hate, under the banner of “corporate social responsibility” (or CSR). CSR attempts to blur the lines between shareholders and “stakeholders,” that is, self-appointed advocates who want businesses to serve some special “social” interest as defined by the advocacy groups. But such “stakeholders” have neither a tangible “stake” in the businesses they mau-mau, nor do they represent anyone but themselves.

Roll back the calendar about 20 years, before the term ESG was coined, and you find the same essential idea marching forward in the business community under the slogan “triple-bottom line” (or BBB). This was the hey-day of “sustainable development,” and it was proposed that in addition to the traditional accounting measures of profit-and-loss, businesses should formally include new accounting measures of “environmental and social performance.” Exactly what these accounting measures might be were never specified with any rigor. 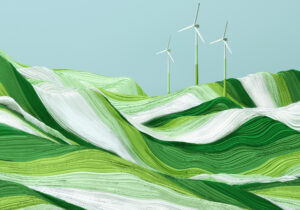 "Sustainable" green heaven for you and for me.

Important voices in corporate America immediately rolled over for this flim-flam. PricewaterhouseCoopers published a “sustainability survey” of 140 major U.S. corporations, arguing that “companies that fail to become sustainable–that ignore the risks associated with ethics, governance and the ‘triple bottom line’ of economic, environmental and social issues–are courting disaster.” The triple bottom line, PwC concluded, “will increasingly be regarded as an important measure of value.”

The CEO of Monsanto at the time, Robert Shapiro, wrote that “We have to broaden our definition of environmental and ecological responsibility to include working toward ‘sustainable development'." This groveling did nothing to reduce the Left’s hatred of Monsanto, or prevent endless lawsuits against Monsanto for the sin of producing Roundup and other useful products.

Perhaps the most egregious corporate suck-up to the CSR/BBB nonsense was Enron which, it is conveniently forgotten today, was the environmental lobby’s favorite energy company right up to the moment it imploded partly because its fraud was based on the hope that it could dominate trading in artificial “markets” for greenhouse gas emissions credits. (Enron was a cheerleader for the Kyoto Protocol that the U.S. Senate had indicated it would never ratify.) In January 2001, a Bear Stearns analyst cited Enron’s planet-friendly orientation in concluding: “We believe that Enron should be compared to leading global companies like GE, Citigroup, Nokia, Microsoft, and Intel, and that its valuation reflects this eminence.” The Bear Stearns note predicted Enron’s stock was going to $90 a share, but in less than 12 months, Enron was bankrupt and its shares worth zero. (And we all know what happened to Bear Stearns.)

There was even a “Dow Jones Sustainability Index” (DJSI) formed in 1999 to track the performance initially of 300 supposed BBB companies, though a close look at its composition found that there was less than met the eye. The DJSI added and deleted companies on their list with surprising frequency, with criteria that confessed to being politicized. Its process of sustainability analysis included reviewing “media, press releases, articles, and stakeholder commentary written about a company over the past two years.” (Emphasis added.)

The DJSI still exists, even though there are now several ESG indices competing with it. Despite its flexible criteria, the DJSI lagged the Dow Jones Industrial Average significantly. Over the last decade it has achieved an annual return of 5.2 percent, while the DJIA has returned 15 percent per year, and the S&P 500 14.8 percent. There is no compelling statistical evidence to validate that “socially responsible” corporations are more profitable or are better investments than companies not on the green bandwagon.

The best commentary on “corporate social responsibility,” no matter how cleverly defined, still comes from Milton Friedman’s observation made sixty years ago in Capitalism and Freedom:

Few trends could so thoroughly undermine the very foundations of our free society as the acceptance by corporate officials of a social responsibility other than to make as much money for their shareholders as possible. This is a fundamentally subversive doctrine. If businessmen do have a social responsibility other than making maximum profits for stockholders, how are they to know what it is? Can self-selected private individuals decide what the social interest is? 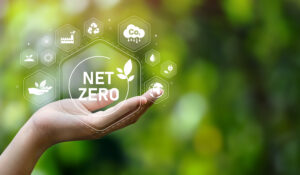 You'll own nothing and be happy.

As we can see with this long-term perspective, “sustainable development” and the “triple-bottom line” gave way to “Net-Zero” and ESG, which are just like “sustainable development” in that their imprecision allows for lots of cheating and self-serving definitions by both government and the private sector alike. ESG will likely start to fade from public view, and eventually the left will come up with some new term replete with with its own jargon and imaginary concepts. And as before, craven and gullible business leaders will fall for it, and the cycle will repeat itself.

On March 21, the Securities and Exchange Commission (SEC), by a 3-1 majority (the lone Republican Hester Pierce voting against the proposal), drafted rules that will further burden all American energy production and thus hamper economic growth. The proposal would require listed companies to disclose to investors how their future value might be impacted by climate impacts or reduced demand for fossil fuels. Specifically, they must disclose:

Of course, for fossil fuel companies customers account for the majority of the emissions it must disclose. The whole point of a SEC-mandated disclosure is to give investors relevant information about the company in order to make wiser investment choices. Not specified in this category is how much of these emissions are “material” to its investors, which you can be certain will be a topic of substantial litigation.

The draft rules provide a backdoor for climate activists “to use a ‘layer of bureaucracy to enact their radical agenda that failed to get approved by Congress.”  The rules would increase job opportunities and benefits for anti-corporate, anti-energy non-governmental agencies, a plethora of “climate certification consultants," accountants, auditing firms, and lawyers. The remoras attached to the bureaucracy—parasites who constitute no small part of the present administration’s remaining backers—are the winners if this goes into affect.

Your tax dollars at work.

The proposal is not self-enforcing. There’s, of course, an opportunity for comment and the proposed rule will not be finalized until sometime this summer. Likely objections include that it exceeds the SEC’s legal mission; and that it requires companies to disclose information that's immaterial to investors and therefore violates the Supreme Court’s rulings that the SEC cannot require disclosures that are not material to investors.

Certainly, the objections will also include a claim of impossibility—that is, without an agreed method for calculating the emissions from its supply chain and customers, compliance would be costly and subject the companies to litigation from claimants arguing the disclosure was inaccurate. The requirement that businesses must disclose even those "greenhouse gas" emissions that are produced indirectly by their operations illustrates how burdensome and preposterous this is—how to document company transportation, the vehicles used to transport what they produce and even employee business travel?

In the face of galloping inflation and rapidly rising energy costs, this proposal should be a non-starter in a rational world. It’s flatly ridiculous. Add to the mix of considerations, the fact that the suicidal energy policies of the Europeans and the Biden administration have impoverished their citizens, created supply shortages of everything including medicines and food, and increased the political power of Russia, and you are hard-pressed to justify this intrusive, costly bureaucratic overreach.

Unless of course, you are an environmental activist whose litigation teams are hell bent on slaying the sky dragon presently known as  “climate change," or a  partner in an auditing firm that that will be in high demand to fact-check these disclosures lest companies run afoul of fraud laws. When companies prepare disclosures to comply with SEC regulations, third parties must be engaged to check it, and the Big Four accounting firms may not be in the best position to audit these climate audits, so voila! A new industry—climate consultants—will be in the money.

Oh, and don’t forget, financial institutions at the trough. Already, Stripe, which is the foundation for most online payment processing, has established a climate research team. It already allows businesses to redirect some revenues to carbon removal technologies. Will it and/or other financial institutions, use the disclosures to deny financial assistance to businesses? Guess.

Once the comment period closes and the SEC issues final regulations, there will be an opportunity for parties with an interest to litigate these rules. I am certain there will be many challenges.