Seamus O’Regan, Newfoundland pseudo-nonce-poet, Canada’s natural resources minister and all-round “weightless politician” (as Rex Murphy dubs him), has turned to poetry, offering a homiletic assessment of Canada’s bright Green future once Canada’s oil-and gas giant, the province of Alberta, has been economically destroyed. In a poem, or rather, a piece of anaphoric doggerel, entitled ALBERTA Is, the poet- minister informs us:

Obviously, Alberta is, and can be, none of these. Hydrogen, batteries, geothermal, and electric vehicles are all dead letters. They are unworkable. The evidence is incontrovertible. Moreover, in a cramp of logical thinking, if Alberta is everything O’Regan says it is, then capture technology has no place in his catalogue. The Twitter post capping this feeble attempt at poetic afflatus, Alberta is vital to [Canada's] clean energy future, is an emblem of perilous inanity. As Michael Shellenberger has shown in article and book, clean energy is remarkably dirty. A functioning Alberta is vital not to a non-existent “clean energy future” but to Canada’s energy independence, industrial survival and national prosperity. O’Regan’s Alberta is a radical environmentalist’s baleful fantasy.

O’Regan may not be a poet in any meaningful sense of the word, anymore than he is an effective minister, but he has the backing of Canada’s poetic community. Acclaimed Canadian versifiers like Dionne Brand, Michael Ondaatje and George Elliott Clarke have signed on to an ecological movement known as The Leap Manifesto: A Call for a Canada Based on Caring for the Earth and One Another, which has targeted Alberta for destruction by transitioning Canada away from fossil fuels.

A poetically influential school known as ecopoets or wilderness poets have added their collective voice to the call for deep-sixing the energy sector and replacing it with abortive renewables like wind and solar, which are known to be unaffordable, inadequate and environmentally disastrous.

For example, in “At the Center, A Woman” from Tourist to Ecstasy, voluminously published ecopoet Tim Lilburn revives an indigenous fable enjoining us to return to the feminine source of unspoiled existence and the spirit of nature—

Ecopoetry’s most famous Canadian practitioner, award-winning Don McKay, argues in an essay for Making the Geologic Now, "[T]he intention of culture… has been all too richly realized, that there is little hope for an other that remains other, for wilderness that remains wild.” In order to assure a revivified nature, we must cease “digging up fossilized organisms and burning them, effectively turning earthbound carbon into atmospheric carbon, drastically altering the climate.

Rather we must affirm “the visionary experience of wilderness as undomesticated presence”—though domesticated, it turns out, by much scarred terrain where “rare earths” are mined and featuring landscape-devouring and soil-poisoning solar panels, 285 feet high wind turbines, unrecyclable blades and masts, bird hecatombs and, as Jean-Louis Butré writes in Figarovox/Tribune, lamenting the despoliation of the French countryside, “new concrete blockhouses to maintain these monsters.” The result is “le déversement de tonnes de bétons dans nos campagnes.” 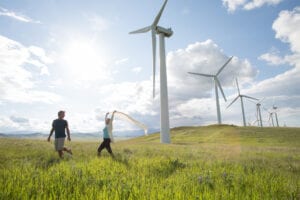 The costs of eventual land reclamation will be, as he says, “pharaminous” and an insupportable burden on municipalities. How this fact consorts with McKay’s environmentally-conscious urging to “amend our lives, to live less exploitatively and consumptively,” and to honor spirit of place remains an open question.

Indifferent poets have also contributed to the wilderness-inspired trashing of reliable energy production. To take one example, in Regreen: New Canadian Ecological Poetry, Mari-Lou Rowley presents us with “Tar Sands, Going down”:

Look up! look way up-
nothing but haze and holes.
Look down!
bitumen bite in the
neck arms thighs of Earth
a boreal blistering,
boiling soil and smoke-slathered sky.

Environmental Catharism is now the name of the game. As Abraham Miller explains, lamenting the deterioration of California’s infrastructure, the Green mandate has shifted state expenditures to providing renewable energy rather than maintaining power lines. Rolling blackouts are the result. In addition, the environmental lobby has prevented prudent clear cutting in order to ensure “nutrients for the soil,” creating forests of highly combustible underbrush and dead trees. The trouble is, Miller warns, “What happens in California never stays in California.”

Very true. Once Alberta is decommissioned, California Dreamin’ is Canada’s future. So much for wilderness, the virgin bride of Canada’s poetic suitors. Unfortunately, Mmho  Mmho will not take us very far. 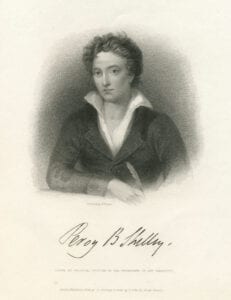 In his celebrated essay, A Defence of Poetry, Percy Bysshe Shelley, among the great Romantic poets of the early 19th century, claimed that “Poets are the unacknowledged legislators of the world.” Shelley was determined to refute the thesis of his friend Thomas Love Peacock, who in The Four Ages of Poetry had argued that poetry had become useless in the era of the Enlightenment. Rather, Shelley asserted, poets are innovators, revolutionaries, visionaries of the “highest order,” and the source of “those social sympathies [and] elementary laws from which society develops.” The true poet runs counter to the shibboleths of the time, rejecting the modish fancies and social trends that imbue the culture. His mandate is skepticism and critique.

Regrettably, our poets no longer challenge the fads and superstitions of the day. Like the politicians, journalists, and academics who have plunged headlong into Green, they have become supine followers of the climate mandarins, lobbying for renewable energy and the abolition of the oil and gas industry. Alberta bad. Energy disaster good. They have become Seamus O’Regan.

There may yet be hope. W.H. Auden, one of the best and most intelligent poets of the modern era, wrote that “Poetry makes nothing happen.” Alberta has a mighty struggle on its hands but, if Peacock and Auden are right, it need not worry about its poetic adversaries—except when, like O’Regan, they happen to be politicians.