I was set to enjoy a much-needed holiday in Marbella when I was called back over a small crisis. How small? One centimetre to be exact. I had worked tirelessly to help get a theme park built along the Thames, and then along came a spider, and sad down beside her.

I was an obvious hire to find the exact language to please even the peskiest environmental groups but moments after they inked the deal… a group of nobodies from nowhere threw a spanner into the works and we were all introduced to England’s new sovereign—the jumping spider.  And not just any jumping spider…lord no, this creeper was being touted as the ‘distinguished jumping spider’ and the ‘favourite of nature lovers’. But just who were these nature lovers? I certainly was not one of them, nor had any of this spider-love shown up in the impact studies. Sadly, I smelled a rat.

We’d done exhaustive research in preparation for what was being dubbed ‘U.K. Disney’ but at the end of the day it was BEETLES that we found—a whopping quarter of all the water beetles in the U.K. were going to happily reside next to an Arthurian kingdom, a sci-fi ‘starport’, and a fairytale land. The surveys said so, I said so, and even the BBC said so. But then the complaints began about potential risk to this beloved spider, and the BBC pulled out—followed by others. 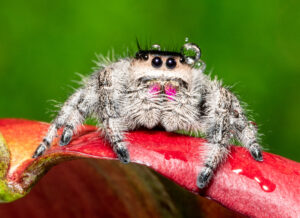 As I said, there had been nothing about this in our audit but since when did spiders mind buildings? It seemed to me that all they ever did was was get into homes and hide in corners and behind hatboxes. Without sponsors, the whole project was nearing extinction—just like the much-anticipated dinosaur land, and fastest rollercoaster in Europe. Oh why did we need these spiders anyway? It’s not like they spun silk or made honey.

Just then I clicked on ‘Save the Swanscombe Peninsula’—a website dedicated to killing my project. Just who were these people? And save the peninsula from what? It was not in danger of not being a peninsula. And any third-grader knew that all of Britain had once been a peninsula until an ancient tsunami separated it from Europe. But of course they were trying to sound scary. I knew this because it was a tactic I’d employed myself.  No one was going to care about killing off the hairy four-eyed beast we’d all been happily squishing in our kitchens and bathrooms. So instead they went bigger… claiming the peninsula itself was in danger! Incredible.

The entire site was madness. They’d hidden the pictures of the ugliest creature to set foot on English soil since the Visigoths, and instead showcased fancifully illustrated butterflies, and angelic buffalo asking you to stop the destruction of ‘the most precious place for wildlife and people alike.’ I wondered then if they were actually trying to get a dig in against the Scots because the area was a swamp.  And a swamp that had already been heavily mined of clay and chalk to support a network of cement plants that now lie crumbling along the estuary. And there were shipping ports, and hydraulic lifts, and abandoned quarries as far as the eye could see. 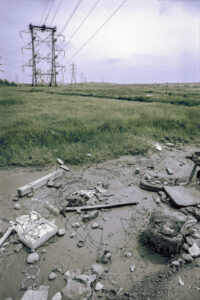 Swanscombe is lovely this time of year.

I assumed that spiders, unlike the spotted owl, couldn’t just be relocated to appease these obstructionists. Ugh.  I longed for the suite I’d left in Marbella in order to come here and sort this out. I thought to call my father who, as a geophysical engineer and oil executive, surely would know the people who know the people who could save my project.  But I dreaded asking him. He was sure to mock me as it’s my people, (the green-niks as he calls us), who cause him all of his trouble. But my project was set to be done in a responsible manner, and create jobs and… eek. I realised I was borrowing his argument. Out of ideas, I gave in and called him.

‘No Spain’. I said. ‘I had to come back to deal with Swanscombe’.

‘Reviving the concrete industry?’ he asked.

‘No daddy. The park—the amusement park. We’re being shut down by a spider.’

‘No daddy, the people who love spiders. YOU KNOW THE PEOPLE! Those… people.’

Of course he did, but I could hear him gloating.

“So you called to ask me how to fend off the environmentalists? Do I have that right?’ he asked.

UGH!  “Yes!  I mean no!  I mean… I just want to finish my job! This place is an industrial wasteland, the spider thing is a ruse, the park will actually improve the environment and it will create jobs’. 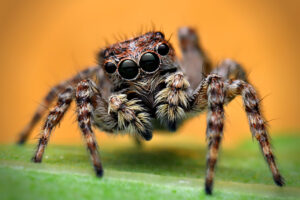 Let us reason together.

‘Ah, then the bulk of your work is done’, he said. ‘You now know you can’t reason with these folks because reason is the last thing they understand—present company excluded of course.  But I suggest you just get round them. They’ve scared off the BBC, so offer the space to a competitor, offer them a good deal, and keep offering until you find a client who isn’t a squish'.

He had a point. I couldn’t win a fight with a phantom. And I decided the best way to show them they didn’t scare me was to get right back on a plane to Marbella. It was a real power play. It showed them we knew we had the upper hand and would not dignify their rants with any response. Besides, nothing like a Zoom call with the Marbella Club in the background to give them what for.