Surprisingly I couldn’t get anyone to go join me at this year’s Salon Privé. It’s not a ‘must-do' but I didn’t expect a flat ‘no’ across the board. Daddy and Judith are in Italy, my school chums are everywhere but London, and even my ex, Patrick, is in New York watching tennis. So it will just be me and my Gemma Chan squiggle dress.

I’m hoping the tone will not be dour given the likely end of the fuel-powered car. It’s early days but with California promising to ban this planet-killing transport, the world is likely to follow. And follow they should. I was an early adopter having purchased a Tesla car and solar panels well before Elon Musk bailed on California. As to blaming cars for the demise of our planet… Daddy and I have gone round and round on this subject. He likes to remind me that Britain was once a peninsula of continental Europe until the Channel was flooded by rising sea levels about 8,000 years ago—well before cars. But as I’ve explained to him—we can’t just ignore the science, no matter what history says. 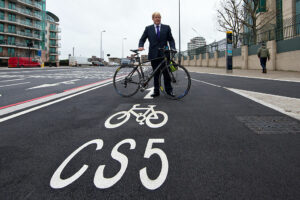 This way to the egress, Boris.

I budgeted two hours drive to Blenheim which should be sufficient except for traffic getting out of London due to all the stupid bike lanes. Of course I’m not saying that bicycling is stupid, only putting so many lanes in an already-congested city has just made for more traffic. And stalled traffic means more CO2. Plus no one is really using the lanes anyway. So was it any wonder Boris got caught cycling outside of his own proscribed covid-zone? It was also his bright idea that bikes become ‘as commonplace as black cabs and red buses’. I mean, really! No one would get anywhere.

It took me a while to find the non-preferential parking, which meant a ten-minute walk to the main entrance on one’s choice of grass or gravel. UGH! Obviously some man with wide feet and a love for sensible shoes had managed this. Making a quick trip to the ladies' I sorted myself out, but I overheard complaints about people having taken the train to Hanborough where there was no taxi rank. Seriously? It was the car event of the season and everyone was walking way more than they wished.

Making my way to the gallery I met an American who introduced himself as ‘Ken’. I was hoping he’d be a candidate to talk about making cars carbon-neutral but he seemed only to want to talk about his ’54 Corvette mule car that he’d shipped over. Oh how he went on about this particular 'vette—and his other 250 cars. I had half a mind to ask if he, like Prince Charles, had any that ran on leftover wine and cheese but thought better of it. My guess of course, was no because he mentioned if you’re lucky you’ll see flames come out of the back end. FLAMES! Not exactly carbon-neutral. I tried easing into a meaningful conversation but it was no use. He didn’t know who I was, he didn’t know who my clients were, and he was impressed by shooting flames.

By contrast the next person I met was Bill Ford, of the Model-T Fords. The Fords didn’t pre-date the Churchills but at an event like this he was no less impressive. Also he knew who I was, and announced that he, too, was an environmentalist. Why had I spent so much time talking to Mr Fire-Butt? Bill had grown up with many thinking his family the enemy. To a lesser degree I had carried the guilt of a father who was the top geophysical engineer in the oil industry. Talk about kismet! I was sure we’d partner in some way to move toward carbon neutrality in the automotive industry. This was exciting. I quickly dazzled him with the work I’d done, and my near-encyclopaedic knowledge of the issue at hand. He didn’t interrupt so I continued on explaining my position and the path we needed to take in order to avoid extinction. 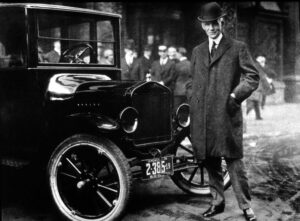 He led me into the Aviva Pavilion and excused himself briefly. I texted my father to tell him the good news. Daddy texted back ‘Hold your horses’.

What?? ‘THIS IS DIVINE PROVIDENCE!’ I texted back.

‘I doubt it’. Was his response. ‘I’m not saying you can’t find common ground and achieve your end but talk to him about something YOU know. Like traffic jams. And how Boris has it all wrong. Tell him that four billion clean cars is still four billion cars on the road. Tell him that restrictions on movement in the name of global warming is not the answer’.

What? OMG NO! Daddy had it all wrong. When Bill came back I told him I owned one of the first Teslas. Bill beamed and said ‘Then you understand! Clean cars alone are not the solution’.

‘And…restrictions on movement in the name of global warming is not the answer’.

‘THANK YOU!’ He said. ‘You know, the freedom to move about the country is by far the greatest thing my grandfather, Henry, created. I aim to preserve that, so obviously I’m against banning cars, and we both agree that more bikes and more smart cars is just—more. Unfortunately some are trying to ban the very thing my grandfather created—the freedom to move about the country. If we allow this next they’ll be rationing energy. Yet global gridlock will stifle productivity. Maybe we need underground roads.

'Would you be interested in partnering with me on an interconnected system of intelligent transport?'

’‘I would indeed’, I said. And that is all I said. Because clearly I could not have said it better myself. Wait 'til I tell Daddy...