Much has been written over the last 20 or so years about the progressive emergence of the nanny state and the corresponding infantilization of the public. In Portrait of an Obama Nanny State, F. LaGard Smith presciently warned us about the “looming nightmare” of state paternalism. Richard Stanley’s Freedom, Common Sense, and the ‘Nanny State’ skewers the destructive wastefulness of both material and human resources wrought by the executive regime. Economist James Buchanan defines the nanny state as “distributionist socialism”; his Better than Plowing is a valuable contribution to the discussion.

Equally incisive, Brian Anderson in Democratic Capitalism and Its Discontents calls the welfare state and its reductive policies a form of “egalitarian overbidding” and “tutelary despotism,” under which “liberty is lost and a bloated central power administers to the needs of an infantilized population.” In order to “reset” the world, as the current lexicon has it, administrators need to return adults into the condition of children, a task already largely accomplished. The ground has long been cleared for coercive supervision. 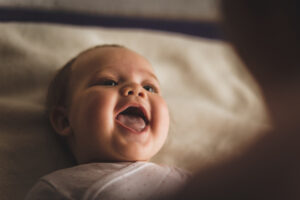 Ready for a lifetime of government oversight.

We see the PsyOps strategy, or manipulative behavioral modification, at work in all the ordinary walks of daily life, diluting and even eliminating the virtues of independent thinking, self-reliance and the faculty of mature consideration. Our political masters, corporate hegemons and cultural soothsayers are intent on population control, under the cloak of ensuring our security. Everything now is about safety, not choice and reason, resulting in a lack of personal initiative, an attitude of submission, fear of risk and renunciation of self.

In short, we have become imbeciles—the word itself derives from the Latin for “weak, feeble,” like children who need to be pampered, monitored, taken by the hand, told what to do and kept obedient and “safe.” To adapt a metaphor from Theodore Dalrymple, it is as if we spend our lives demanding safety certificates from bus drivers before boarding. Examples abound in every domain of life.

Thus, a timorous and fearful public could be easily spooked by the Covid scam, including the universal hype about the effectiveness of the vaccines and boosters. Anyone who has been led to believe that a mask will stop a Covid particle, or that a face shield or plexiglass barrier will prevent an ambulatory virion from taking a detour to mouth and nose, is living in a fantasy world, like a child who believes a teddy bear is a talisman against the dark.

Untold millions of gullible grown-ups raced to get their improperly tested, experimental and likely harmful lipid jabs, swallowing whole the media and government line without performing their due diligence. A population so tamely led by the nasopharyngeals, so readily susceptible as children are to group persuasion, was easy picking for the WHO, the WHA, and the Davos bunch in cahoots with compliant medical regimes and unethical or authoritarian governments.

But the Covid panic is only the most glaring contemporary instance of galloping puerility. Everywhere we look we see examples, great and small, of childish obeisance to the rule of dumbing-down, the real pandemic of fright. Take the weather. If we have a heat wave or a week of sultry temperatures, it’s now called a heat dome under which we cower in fear, as if in the shadow of a massive alien spacecraft blotting out the sky and come to wreak planetary havoc. Here in temperate Vancouver, the most recent “heat dome”—the thermometer in the lower 80s—lasted two days. If it rains a lot, we are experiencing an atmospheric river which may conceivably flood our homes. The only possible response is to seek shelter or start paddling. The terminology seals the deal. 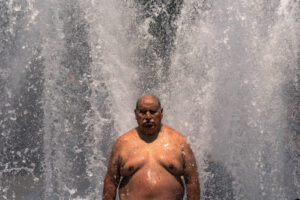 And it goes on. We need to be alerted to the fact that a freshly poured cup of coffee at a takeout counter is scalding hot; if we spill it on our laps, we can sue. Like children, we are not responsible for what we may do to ourselves.

We cannot plug in a washer/dryer without being warned that we are in danger of electrocution. I once inserted a bobby pin into an electrical socket and wore a sling and bandage for several months, but I was three years old.

A message several sentences long flashes on our car’s dashboard screen commanding us to pay attention to the road; of course, if we pay attention to the screen, we may shortly find ourselves in an ambulance, which somehow defeats the purpose. Nonetheless, we have been informed that focusing on the road is the thing to do when driving, since we might not have known. The car will even parallel park for us since so arduous a task is obviously beyond our competence.

University students, old enough to drive, drink, “hook up” or be drafted, clamor for “safe spaces” and are deeply disturbed by something called “microaggressions.” Great books come festooned with “trigger warnings,” if they are not banned altogether, lest they offend a febrile sensibility. If the “wrong” person is elected to political office or a Supreme Court decision is not to their liking or a “misgendered” pronoun floats menacingly toward them, they break down and cry or throw a tantrum.

Similarly, digital platforms like Facebook and Twitter throng with jejune hecklers acting like a pack of spoiled brats hurling insults around the schoolyard, specimens of what Victor Davis Hanson calls “the cry-baby leftist mind,” for whom dialogue, discourse and decorum are beyond their development. Manners, children, manners! 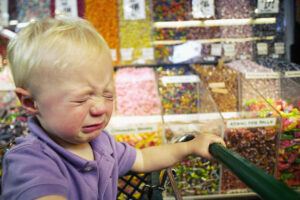 Life sucks and then you die.

The nanny state is determined to confiscate people’s firearms on the pretext, obviously false, that law enforcement is a better option than self-defense. After all, children should not play with guns, and the children, to their cost, generally agree. Never mind that home-invaders have been given carte-blanche.

At the recent G7 summit, oblivious to the rigors of systemic inflation, civil discord, rising taxes, and prohibitive food-and-fuel costs, Canadian PM Justin Trudeau and soon-to-be-former British prime minister Boris Johnson enjoyed a good laugh riffing on the standard male joke by comparing the length of their jets, among other such risible trivialities—the contemporary form of mature statesmanship on display.

Anyone can come up with numberless examples for oneself, provided, of course, we have not been diminished to the condition of rug rats. Those who have managed to escape the pubescent cultural climate will be at their wit’s end trying to negotiate their way among a population of adult toddlers, which is what our culture has descended to. It is hard to avoid the feeling that the culture has been hollowed out, that courage, heart and substance have been made to disappear, leaving only function and habit to keep us going.

Meat will be a special treat. Read more: https://t.co/RiQP6tpkfp pic.twitter.com/7BcRHgnWTx

“You will own nothing, and you will be happy,” as the Davos resetters and their collaborators like to say, treating their subjects as infants beholden to their doting parents who have only their welfare at heart. For when the freedom to be ourselves as mature adults capable of making our own considered and independent decisions, when we have been reduced to the status of callow and artless moppets under the tutelage of their masters, incapable of reflection, rational analysis, personal agency or sensible behavior, then—as David Harsanyi puts it in Nanny State—we are back in the stroller, content to be wheeled along to someone else’s destination.

The welfare state regards the individual as a molecular constituent of the larger whole, reliant on and fearful of the administrative apparatus which acts in loco parentis commanding allegiance from its demographic wards. The world has been made safe for absolutism and citizens have been freed from the strenuous demands of freedom. The nanny state, or, in the words of Joel Kotkin from The Rise of Corporate-State Tyranny, “the progressive clerisy in government and media,” is a preparation for and, indeed, the direct precursor of the regime of rentier Fascism, deceptively known as “stakeholder capitalism,” envisioned by the Great Reset. The road to serfdom is in effect the road to childhood.