Spontaneous protests are among the most powerful forces in our politics, which is unfortunate because they are, generally, bunk. We've written about this before, as when we discussed a leaked protest organizer job posting with an $85,000 salary. That's a lot of green if your job is just waiting around to hear the voice of the people speak.

For the latest example, here's Helen Andrews on an ongoing political tumult in India. It all started with a tweet from well-known environmentalist/truant Greta Thunberg supporting some anti-government protestors in that nation, with a link to a Google docs file included. According to New Delhi police, Thunberg shortly thereafter got a text message from her Indian counterpart, Disha Ravi, saying "Shit shit shit … Can you not tweet the toolkit … Our names are on it." Thunberg quickly deleted the tweet, and put out an "updated" statement, but the damage was done.

So what is in this "toolkit"? Here's Andrews:

[It] describes methods for capitalizing on the farmers’ protests that have wracked New Delhi since November, after [Indian PM] Narendra Modi’s government passed a package of laws liberalizing agriculture markets.... The linked document included sample tweets, suggestions for in-person rallies, and a timeline for an escalating protest campaign climaxing on January 26. Unfortunately, the January 26 protest in New Delhi proved a little too climactic. Roads were swarmed, cell towers were destroyed, and one farmer was killed when, ramming a police barricade, he capsized his tractor. Farmers rushed police lines on horseback with swords.... Hundreds of policemen were injured and many hospitalized.

It was, in short, an instruction manual for disorder, composed -- apparently -- by experienced international activists. And to the Modi government it seemed to be just a part of a wider, coordinated international campaign. They've pointed out, for instance, that not only have leftist political figures like Ilhan Omar and Trevor Noah made public statements in support of the protestors, but even vacuous celebrities like Rihanna. As one government spokesman put it, “These are very concerted efforts... I don’t think [Rihanna] can even point out on the global map where India is!” 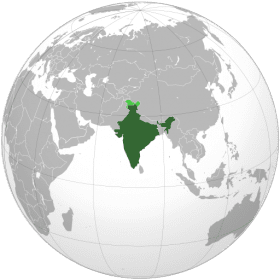 Rihanna, you are here.

But what do agriculture protests have to do with environmental activists like Thunberg? Nothing, except for their potential to harm the image of Modi, a figure much despised by correct-thinking lefties in the west. On that score, they've failed, as 80 percent of Indians approve of the government's response to the protest. This importantly includes farmers, for whom the protestors claim to speak.

For her role in all of this, Disha Ravi was eventually charged with sedition, an act which Andrews concedes is probably an overreaction. But in the context of a post-Raj India, ever sensitive to rich western nations meddling in her internal affairs, it makes rather more sense.

Always be suspicious of supposedly leaderless groups attempting to influence public discourse through apparently "spontaneous" public protest. Chances are, they're trying to manipulate someone. Don't let it be you.