"Victory has a thousand fathers," said John F. Kennedy, "but defeat is an orphan." By that measure, America is running a military establishment that more closely resembles an overpopulated Dickensian sweat shop than a modern war machine. Indeed, it's been so long since the United States has won a war -- back when the War Department still existed, in fact -- that hardly any living American knows what "victory" means any more. But what difference does it make? This man's army is now the province of pregnant females, transsexuals, and born-male admirals in skirts. No wonder it can't fight.

But whose army can? As it happens, today is "Victory Day" in the former Soviet Union, marking the defeat of the Wehrmacht by the Red Army under Stalin and Marshal Zhukov in 1945. The occasion will be marked in Russia by strutting military parades, of the good old-fashioned Soviet kind, but minus the, you know, victory. With Russia tied down in its slog against Plucky Little Ukraine, the hollow nature of what was once the world's most formidable land army has now been laid bare for all to see.

Accordingly, Vladimir Putin is now at a crossroads: to go all in, including the use of tactical or other nuclear weapons, or to withdraw in defeat? Since his grasp on power wouldn't survive the second option, betting the collective farms and the tractor factories of his youth in the U.S.S.R. is the only path open to him, absent some kind of deus ex machina who magically appears and somehow restores the status quo ante. And even then, we're right back where we started. 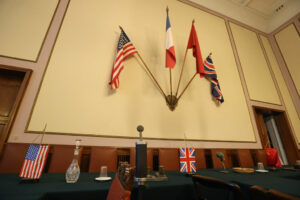 As I remarked on Facebook the other day (the fascists at Twitter having closed that platform to me for the past two years for no reason they can adequately explain), I'd sleep more easily at night if I thought that a single member of the Biden administration or the "Defense" Department establishment had read War and Peace, a poem by Pushkin, or taken in a performance of Tchaikovsky's opera, Eugene Onegin.

The least we could expect from our crack team of diplomats and REMFs is that they know what or where the Third Rome is, or the story of the conversion of the Kievan Rus, or how deep the roots of the Orthodox Church run in the Muslim-desecrated occupation of the Church of Holy Wisdom and the ruins of Constantinople and the Eastern Roman Empire. But no, that would be asking too much of the credentialed empty suits who prowl the corridors of "Defense" or State and see the world through the partisan lenses of the JFK School of Government-- which basically comes down to, what have you done for me lately?

But no, that would be too much to ask. Far better to commit the characteristic American sin of regarding all the rest of the world's peoples, cultures, and nations as the rough equivalent, albeit inferior, of our own, and expecting that their savage denizens will react in the same way to the same carrot-and-stick stimuli as our own peasants do. After all, as we learned in Vietnam, inside every benighted foreigner is an American screaming to get out. Why, just look at the southern border!

On the other hand, it would provide a clue to the members of Biden war party why Putin launched his attack on the Ukraine and what he hopes to gain from it. It is wise to remember that this is a man who saw his country shot out from underneath him between 1989 and 1991, and his world turned upside down. Imagine an American politician who witnessed Texas and the southwest being handed back to Mexico and the disputed Oregon Country returned to British Canada in the wake of a catastrophic military defeat or governmental collapse.

Slowly, Putin has been trying to piece together the old Mother Russia, at least as he understands it, which means off-loading the 'stans, neutralizing the Georgians and the Armenians, but reuniting Slavic lands such as Ukraine and Belarus (already firmly in his camp), and eyeing the Baltics as well. His alliance with the Russian Orthodox Church at least gives him a religious fig leaf in his quest to resurrect the Third Rome and motivate his demographically dying country with dreams of past and possibly future glory. 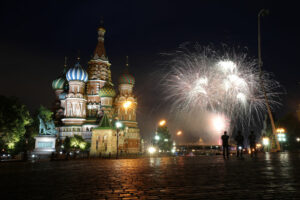 The Kremlin's allies once more.

The bigger, more important question, however, is this: why are the Clinton-Obama-Biden Democrats trying to make the conflict in the Ukraine into a proxy war against Russia? Why, knowing of Putin's increasing desperation to finish the job, have they given him no diplomatic way out? Why instead have they pushed an obsolete NATO right up to his borders, when if there's one thing that makes Russians crazy it's territorial encroachment from the west? Just ask Napoleon how that worked out for him.

The North Atlantic Treaty Organization won its war against the U.S.S.R. at the end of 1991 when the Soviet Union was dissolved on Christmas Day. Accordingly, it has no further reason for existence and should have been dissolved itself decades ago. As Eisenhower, the Supreme Commander of the Allied Expeditionary Force in Europe, reported to the combined Allied chiefs of staff upon General Jodl's surrender: "The mission of this Allied Force was fulfilled at 0241, local time, May 7th, 1945." 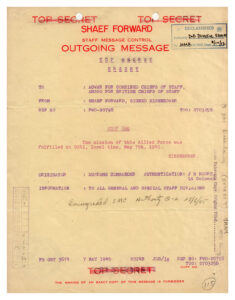 But don't forget the exception to every rule: a bureaucracy, especially the demon child of the military-industrial complex, will never willingly commit suicide. And so NATO has staggered on, expanding rather than contracting, waving the Russian flag as a kind of bogeyman/talisman in order to keep its coffers full and its officers well-fed.

The fact is that the Russians -- the Democrats' favorite allies right up to the minute they cast off Communism! -- needed to be maintained as a threat. And so, in the direct aftermath of her 2016 election loss, Hillary Clinton and her flying monkeys in the media concocted the so-called "Russian collusion" hoax, which is only just beginning to finally unravel in the courts now.

In the meantime, the Biden forces, hell-bent on finishing the job of "fundamental transformation" of the country that Barack Hussein Obama was just too lazy to complete, are doing everything they can to provoke a shooting war with Putin's Russia. "A weakened Russia" is one of the administration's explicit goals, as the current secretary of defense, Lloyd Austin, has declared. And while the administration has denied it, it does appear that the U.S. has been sharing intelligence regarding the targeting of Russian military commanders and other high-value targets -- which is an overt act of war and no doubt is regarded as such by Putin and his officers. And that is very dangerous, especially since they have nowhere else to go.

Many in the American commentariat were on record right up to the moment that Putin sent in his tanks that the Russians wouldn't dare invade; I was convinced he would, on historical and revanchist grounds. Once he did, most expected an easy rollover. What followed was not so much surprise at the rusty Russians' lack of military capability (armies that are not used disintegrate; armies that never know victory are easily demoralized) but the alacrity with which the U.S. and most of Western Europe sprang into action. Sanctions flew, signs sprouted, and the propaganda machine immediately cranked into overdrive, elevating the comedian-president of one of the most corrupt nations in Europe -- and the Bidens' private piggy bank -- to Churchillian status almost overnight with a unanimity remarkable even by current corporate-media lickspittle standards.

America is now flirting with disaster as it engages with a wounded, nuclear-armed bear that won't hesitate to use theater or tactical nukes if it feels an existential threat. And why wouldn't it? It's seen this movie before. Even Jill Biden is currently kicking sand in Putin's face. Meanwhile, here at home, the U.S. is cratering almost as surely as the Soviet Union, riven by irreconcilable domestic moral and political differences; all of its principal constitutional edifices under attack by the Left, including the Supreme Court; the economy circling the drain; the supply chain thoroughly disrupted by an outrageous medical alarum bordering on a malignant hoax; our woke military emasculated; and our civic faith in almost every institution destroyed. Meanwhile, a gerontological elite that rivals in its longevity the Struldbruggs in Swift's Gulliver's Travels continues to heedlessly shuffle its way toward disaster.

So what will it take to bring America to either its senses or its knees? What does victory look like in this pointless war? In 1945 Soviet soldiers waved the hammer and sickle over the ruins of Berlin. In 1989, I stood at the crumbling Wall between the Brandenburg Gate and the Reichstag, and somehow wound up with some Grepo's cap as a souvenir. Luckily, the Cold War never quite turned hot. But if this war -- Biden's War -- goes nuclear, what will be left to grasp? A handful of radioactive dust? Pray that somebody in Washington comes to his senses, and soon -- but don't count on it.