The U.S. hit twin milestones recently : federal tax collections set a record for siphoning money out of your pockets, while in the meantime the national debt set a record as well. Oh yes, and inflation—so recently brought to heel by the Democrats via the Inflation Reduction Act!—is soaring as well. Let's look at the numbers. First taxes: 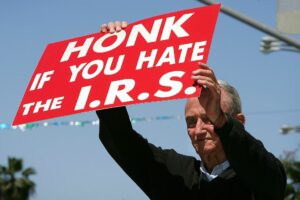 Bringing all Americans together every April 15.

Now, have a look at the national debt. Please do not confuse this with the deficit, which is how much Washington goes into additional hock each year even as it is mugging you. This, rather, is the total of all the deficits in our nation's history:

America’s gross national debt exceeded $31 trillion for the first time on Tuesday, a grim financial milestone that arrived just as the nation’s long-term fiscal picture has darkened amid rising interest rates. The breach of the threshold, which was revealed in a Treasury Department report, comes at an inopportune moment, as historically low interest rates are being replaced with higher borrowing costs as the Federal Reserve tries to combat rapid inflation. While record levels of government borrowing to fight the pandemic and finance tax cuts were once seen by some policymakers as affordable, those higher rates are making America’s debts more costly over time.

Finally, here are the current inflation numbers, in the wake of the thoroughly dishonest Inflation Reduction Act: "The current rate of inflation in the United States is 8.26% (for the 12 months ending on Aug 31, 2022, down from 8.52% in July)." Some reduction, like saying your house is a little less on fire this month than it was last month. It's still on fire. 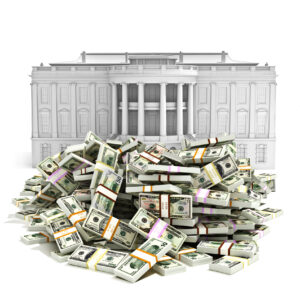 Too much is never enough.

The point is by now beyond obvious: with numbers like these, the Republic cannot continue until it gets its fiscal house in order, which will be never. And why should it? In addition to everything else wrong with the Robinette administration—the Afghanistan disaster, the cratered economy, widespread social unrest including soaring violent crime, the literally insane rush to war against Russia in order to protect Biden Inc.'s corrupt family business in the Ukraine—the financial wizards in Washington are also in the grips of a madness known at Modern Money Theory, which is the fiscal incarnation of the Left's overall embrace of Marxist Frankfurt School Critical Theory:

Modern Monetary Theory (MMT) is an economic theory that suggests that the government could simply create more money without consequence as it's the issuer of the currency, according to the Federal Reserve Bank of Richmond. As part of this theory, the thinking is that government deficits and national debt don't matter nearly as much as we think they do.

This is the current thinking of our government and, when you stop to think about it, has been for decades. One warning sign came early, when the American space program, so proudly having risen to President Kennedy's challenge to put a man on the moon before the end of the 1960s, effectively ceased to exist after December of 1972, with Richard Nixon freshly re-elected in one of the greatest electoral landslides in history. (Spoiler alert: he'd be deposed two years later in America's first political coup.)

As the full effects of the various Sixties' revolutions began to take effect, it was deemed more "moral" to direct our money to social goals, including welfare and the various entitlement programs that took root like kudzu in Washington and gradually, in the name of  "helping," choked the life out of the old can-do America and replaced it with gimme America. 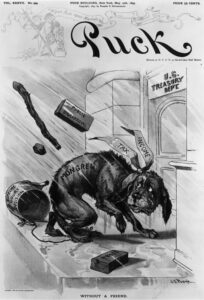 But the real blow to America's fiscal house—and, more important, its commitment to personal liberty—came just over half a century earlier with the 16th Amendment, proposed in 1909 and ratified in 1913. Proposed by the nascent "progressive" movement during the William Howard Taft presidency, and ratified by the states in February 1913, after the election of Woodrow Wilson (in which the GOP split the vote when Teddy Roosevelt, wanting his old job back, ran on the Bull Moose ticket and cost Taft re-election) but prior to Wilson's inauguration.

"Democratic Party Platforms under the leadership of three-time Presidential candidate William Jennings Bryan, however, consistently included an income tax plank, and the progressive wing of the Republican Party also espoused the concept," notes the National Archives, but conservatives had always managed to squelch it. Until:

In 1909, progressives in Congress again attached a provision for an income tax to a tariff bill. Conservatives, hoping to kill the idea for good, proposed a constitutional amendment enacting such a tax; they believed an amendment would never receive ratification by three-fourths of the states. Much to their surprise, the amendment was ratified by one state legislature after another, and on February 25, 1913, with the certification by Secretary of State Philander C. Knox, the 16th amendment took effect.

Yet in 1913, due to generous exemptions and deductions, less than 1 percent of the population paid income taxes at the rate of only 1 percent of net income.

That was then, this is now. What seemed, or was made to seem (which is more like it) a good idea at the time has turned out to be one of the four principal "progressive" death-blows against the original Constitution. (We'll consider the other three in subsequent columns.) What has happened since the U.S. abandoned its prior reliance on excise duties and tariffs, which served the nation well for the first 140 years of its existence, is that the Congress, with the now-infinite resources of the American taxpayer and the Treasury's printing presses, has entirely abandoned all fiscal propriety—the inevitable consequences of an income, as opposed to a tax on goods and services.

To take just one example, in 1991, Lowell Weicker, the Republican governor of Connecticut, instituted a "temporary" income tax in a state that famously had had none. Pitched as "middle-class tax relief" that would make the rich "pay their fair share," the tax remains with us still:

Weicker pitched a sunset provision for state income tax multiple times in 1991, and the 1992 budget created a tax commission that “could conceivably ‘sunset’ the income tax in 1993,” according to the Boston Globe. According to a July 12 article in the Hartford Courant, Weicker’s budget “includes one unexpected wrinkle – a proposal to have the entire revenue structure expire in 1994 unless readopted.” Weicker used the sunset provision to garner support among unwilling Connecticut legislators as 1991’s budget battle stretched into the summer months.

In a televised speech on July 17, 1991, Weicker offered to end the tax in 1993, which would have made the income tax essentially a one-year deal to boost state revenue. According to the New York Times, Weicker “offered what he called a ‘fair compromise’ to automatically end the income tax in December 1993.” 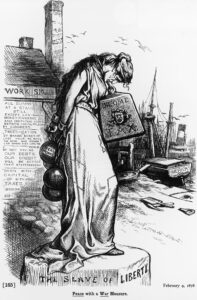 Since then, Connecticut (where I live when I'm in the U.S., so I speak from first-hand experience) jumped from the flat-tax frying pan into the "progressive"-tax fire: a small state, once known as the Land of Steady Habits, now boasts an outsized debt of $35 billion, only recently ameliorated by a $4 billion surplus that will go (maybe) toward paying down the massive I.O.U.s the Nutmeg State has long-ago promised to fund pensions for... retired state employees and teachers. That's right, the current residents will get absolutely nothing, because nothing is too good for retirees who no longer contribute to either the economy or the commonweal. Pass an income tax, get disaster, whether at the federal or state level.

While Connecticut lawmakers sold the progressive tax as a way to provide middle-class tax relief and reduce property taxes, neither occurred. Instead, everyday taxpayers have been hit with recurring income and property tax hikes. The typical Connecticut household has seen its income tax rates increase more than 13 percent since 1999. At the same time, property tax burdens (property taxes as a share of income) have risen by more than 35 percent. Making matters even worse, the policy change cost the state’s economy more than $10 billion and 360,000 jobs, ultimately shrinking the labor force by an estimated 362,000 workers.

The Connecticut progressive income tax failed to fix state finances. In the wake of its progressive income tax experiment, Connecticut has continually raised taxes on the middle class, has a chronic outmigration problem, and finds itself in a financial situation that is just as dire as Illinois’. Connecticut has run state budget deficits in 12 of the past 15 years, and is holding more debt per capita than almost any other state.

Diabolically, the "progressive" Left has long pitched "progressive" income taxes as an act of enforced Christian charity, even though few of them are Christians, either of the professed or practicing variety. The income tax instead has proven to be a mechanism by which the wealthy—especially those benefitting from generational wealth, and thus have no "earned" income to report to the IRS—continue to thrive while the middle class, which has its money sucked out of its pocket via "withholding" (1943-), can never accumulate enough to move up. It's the famous Fox Butterfield Effect, in which an apparent contradiction is more properly understood as cause and effect.

The truth is simple: when you have an income tax, you also get massive, snowballing debt. One of the first items on the DeSantis administration's order of business in January 2025 should be a move to repeal the 16th amendment as he cuts the size of government and abolishes any number of useless federal departments, reforms the franchise—and gives Americans back their economic freedom.

Next up on the chopping block: the 17th Amendment.