Recently, a friend sent me a Globe and Mail article entitled “Is it Time to Decolonize Your Lawn?” with the comment that he guessed it was a slow news day. Before I had finished the first few paragraphs, I saw what I was in for: a censorious screed against green grass combining anti-Western, anti-capitalist animus with an oft-incoherent environmentalism.

The article, by Sierra Bein and Christopher Katsarov, informs readers that while many people associate a green lawn with carefree childhood summers, and may even “feel a sense of pride” about their carefully tended grass, such positive associations are a delusion. Just as we now regard with mystification the Victorian practice of affixing dead birds to ladies’ hats, so we may come to reject the traditional lawn as a symbol of violence. The lawn’s troubles stem from its location “at the confluence of two hot-button issues: climate change and Indigenous rights.”

Not everything in the essay is nonsense. It is true, for example, that green lawns require a lot of water during hot summers, and that in drought-prone areas, the need for water—and for chemical fertilizers—is a problem. But a fact-based argument about alternatives to the grassy lawn would not have allowed the authors to range over such guilt-inducing preferred topics as cultural appropriation and planetary peril.

The essay is a hodgepodge of assertions and half-made arguments, many over-stated or self-contradictory. Readers are chided for not realizing that weeds “are as wonderful as any other plants” (“when you actually get to know them”) and then told a paragraph later that attempts to get rid of weeds “often lead to more” (though wouldn’t that be a good thing according to the article’s logic?). At one point, lawns are criticized for failing to mitigate heat, as if gardeners don’t know that’s what trees are for. Biodiversity is touted, but never with the recognition that most serious gardeners seek biodiversity.

Nonetheless, despite its tangents, the essential ideas in the article are unambiguous: 1. Lawns are expressions of colonialism and private property, and are therefore a vestige of the bad old days; and 2. Lawns indicate our western attempt to control nature, a dangerous act of hubris that must be overcome. 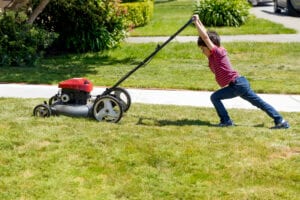 The suggestion that lawns violate “Indigenous rights” is perhaps the weakest of all the article’s dubious assertions, and it is never seriously pursued. But we are told that lawns are “a lasting symbol of how settlers appropriated Indigenous land and culture.” How so? The article never manages a coherent answer. It is stressed that the idea for green lawns—to be used for picnicking and croquet playing—was brought by European immigrants to North America in the late nineteenth century, even though the conquest and colonization of the land that would become Canada and the United States had occurred centuries earlier and had nothing to do with lawn care. It’s hard to believe that relations between Native and non-Native peoples would have developed differently if European Canadians had never come to valorize a swath of green, and I doubt many contemporary Indigenous advocates lie awake at night plotting to eradicate the lawn-mower.

The greater issue here, one suspects, is the opportunity for the authors to tout the superior ecological virtues of the Indigenous way of life, and to shame non-Native people for their alleged failures. A First Nations advocate is quoted extolling the respect Natives peoples traditionally held for the land. Jayce Chiblow, a member of the Garden River First Nation and spokesperson for a group called Indigenous Climate Action, says of plants that “Our teaching is that those are our relatives and that we belong to the land. It’s an entirely different concept” (from the destructive, instrumentalist attitude of non-Natives). Chiblow adds that “for Anishinaabe people, the bush was their pharmacy and fridge. ‘It was our everything.’” That “everything” was decimated as a result of the arrival of Europeans, who caused “a decline in the biodiversity so relied on by Indigenous people” and who brought “invasive species over with them.”

This is a familiar idea sometimes referred to as the motif of the Ecological Indian, the widely-held conviction that Indigenous people have a special caretaker ethic vastly different from, and superior to, the exploitative mentality of non-Native peoples. The reality is far more complex, as anthropologist Shepard Krech demonstrates in his book The Ecological Indian: Myth and Reality. Providing an extensive exploration of the notion that Native Americans were closer to nature than Euro-Americans, he examines the mass extinctions that accompanied the arrival of Native peoples on the North American continent, Native use of fire in agriculture, and the fates of buffalo, deer, and beaver populations under Native control. 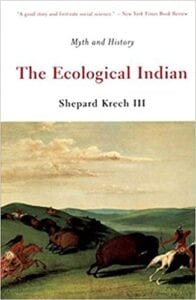 He concludes that although Native peoples certainly did emphasize the interrelatedness of human beings and other living things, neither their actions nor their belief systems—specifically their belief in animal reincarnation—supported a concern for the balance of nature or what would now be considered environmentalist principles. No matter. The romantic idea that non-Indigenous descendants of “settlers” (sometimes called “settler invaders” for the added sting) should engage in self recrimination for their despoliation of a pristine world is a hardy doctrine of contemporary belief.

Related to the emphasis on non-Native desecration of the land is an equally familiar attack on property ownership. The article makes the link between lawns and “the property ownership mentality,” the capitalistic (i.e. bad) idea “that we can own” things at all. Readers are informed that, once established in North America, the manicured lawn became a sign of respectability and of wealth. “Every backyard essentially became a private park” as mini-landowners vied with one another for conspicuous displays of their status. All of this is presented as if its immorality and negative consequences are self-evident, and as if giving up our lawn-mowers and allowing the weeds to sprout unhindered are necessary acts of environmental and communal contrition.

It doesn’t seem to matter to the article’s authors that it is impossible to establish any positive correlation between state or communal ownership of land and ecological flourishing: quite the opposite. Environmental catastrophe is the signature of Communist regimes, which lack the responsibility incentives of private or commercial ownership. As Thomas DiLorenzo points out in The Problem with Socialism, to envision the greater care involved in private ownership, one need simply notice “how car owners treat their property compared to how rental cars get treated, or how homeowners treat their homes and property compared to how renters treat theirs.” But in the upside-down vision of radical environmentalists, the man who lets everything go to weed is practising greater care than the person who labors to make his home beautiful.

The impetus behind the many flabby generalizations and utopian imaginings on display here is ultimately an anti-human one, as is made clear in the authors’ respectful quoting of Dr. John Douglas Belshaw, a Canadian history professor at Thompson Rivers University in Kamloops, B.C., who asks rhetorically, “What is a lawn but a statement of control over nature?” Belshaw goes further to itemize the indignities practiced by “settler culture” against our mother nature in furtherance of the settler culture imperative. “You see that river there? We can dam that. We can organize that water, we can make that water work for us. It’s essentially the same mindset. I can reorganize this landscape, flatten it, plant lawn, find a non-indigenous species of plant, of grass, and completely extract anything that’s not homogenous, that doesn’t fit with this green pattern and control it… A backyard with a big lawn is like a classroom for colonialism and environmental hostility.”

Belshaw does not mention that Native peoples too sought to control nature and make it work for them, but lacked the technology to do so as effectively as their European counterparts. Is this professor of Canadian history really advocating that we stop trying to make nature work for us? The degree of success of the European adventure in North America is rendered vivid by this well-read man’s inability to imagine how gruesome and full of suffering and death our lives would be without our much-denigrated “control” of nature.

Alleging a series of historical, cultural, economic, and environmentalist accusations against lawns, this preachy article seems intended to provoke in readers a massive guilt and sense of illegitimacy. From whatever angle it is viewed, the green lawn accuses its owner of wastefulness, pride, immorality, and perhaps even complicity in genocide.

With an article like this, we have left the realm of the rational, of cause and effect, and of individual agency far behind. The new conceptual arena we enter is one of collective shaming and technocratic governance.  As our ability to feel confidence in even the most seemingly apolitical actions and basic values is undermined, our need for reliance on “experts” including Indigenous advocates, conservation officers, radical environmentalists, and anti-humanist professors, must increase. The “decolonizing” project has almost nothing to do with lawns or biodiversity, everything to do with delegitimizing western freedoms and prosperity, and destroying our ability to understand or defend them.