This isn't the worst thing that Canada's Liberal government has done -- that once-proud nation's dystopian embrace of euthanasia and organ harvesting probably tops that very long list -- but this tweet from Justin Trudeau's Minister of Environment and Climate Change, Steven Guilbeault, demonstrates a similar contempt for their citizens:

We promised Canadians we would ban certain harmful single-use plastics.

This despite the fact that Canada's contribution to the tons of plastics floating around in the world's oceans is negligible -- as has been well documented, the vast majority of plastics in the ocean (between 90 and 99 percent) get there from just ten rivers, eight of them in Asia and two in Africa. Which is to say, this is less a story about single-use plastics in Canada or the U.S. than it is of poor waste management in third world countries.

Put another way, if you are a sick, sad, or poor Canadian, even if you're a wounded veteran, the Canadian government can't think of any way to help except to kill you. But if you're a Canadian who wants to serve potato salad at a summer picnic or doesn't have enough silverware for everyone who wants a slice of Granny's famous fruit cake on Boxing Day, sorry, you're out of luck.

Contempt is the only word for it.

On Tuesdays the garbage is collected in my neighborhood. Local apartment buildings make sure to put out their trash early. So when I walk my dog, we often pass large masses of see-through plastic trash bags, with their neatly sorted plastic contents, washed and bundled to be recycled. My neighbors are quite fastidious, as are their building superintendents. The effort to recycle takes significant time and effort, and no one skimps on it.

Different trucks pick up different types of trash, and take it to different places, naturally. This is expensive. But New York City has mandated recycling, to be environmentally correct, and help save the planet by re-using juice containers, water bottles, and all the rest of the plastic that holds stuff we want. But what if it turned out that this effort is entirely in vain? That it is a charade? A religious ritual to expiate the sin of consuming things in a wealthy, modern society? 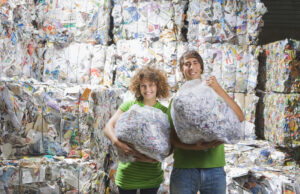 It's great to feel great!

As a matter of fact, it does turn out that all this effort and expense amounts to nothing, environmentally. In a widely circulated paper released on October 24th, no less an authority on environmentalism than radical Greenpeace announced that recycling plastic is a total sham, of tiny value. There is no such thing as recycling most of that plastic.

U.S. households generated an estimated 51 million tons of plastic waste in 2021, only 2.4 million tons of which was recycled. The report also finds that no type of plastic packaging in the U.S. meets the definition of recyclable used by the Ellen MacArthur Foundation’s New Plastic Economy (EMF NPE) Initiative. Plastic recycling was estimated to have declined to about 5–6% in 2021, down from a high of 9.5% in 2014 and 8.7% in 2018. At that time, the U.S. exported millions of tons of plastic waste to China and counted it as recycled even though much of it was burned or dumped.

The report finds that actual plastic recycling is down from a 2014 high of 9.5 percent to a 2021 low of 5-6 percent. Most of that plastic is “recycled” in China, and other poor Asian countries, to which we export it, at great cost. We pay them to recycle it, and we have no idea what they actually do with it. In fact, Greenpeace reports, most of it is dumped, though it is “counted” as recycled. For a lot less taxpayer money we could put it in landfills right here.

This long overdue, honest discussion of just what happens to this expensive garbage notes that the reason for these realities, is that most plastic is simply not recyclable. Lisa Ramsden, Greenpeace’s head of plastics, writes, “But the data is clear: practically speaking, most plastic is just not recyclable.” More specifically, the report tells us: “Mechanical and chemical recycling of plastic waste has largely failed and will always fail because plastic waste is: (1) extremely difficult to collect, (2) virtually impossible to sort for recycling, (3) environmentally harmful to reprocess, (4) often made of and contaminated by toxic materials, and (5) not economical to recycle.”

One wonders how long it will take the environmental consortium of do-gooders and politicians to fess up to this reality? When will school children cease being indoctrinated about the magic of plastic recycling? When will homeowners be absolved of having to separate their trash? 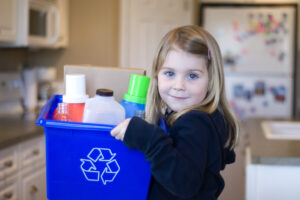 Get 'em while they're young.

Of course, Greenpeace wants us to switch to some other approach. But the point is, we have been lied to, and snookered into washing throwaway bottles that end up in third world dumps, for going on three decades now. This exercise has literally cost us hundreds of billions of dollars for pure virtue signaling. Knowing this, how seriously can you take the next demand?

The next demand, as it happens, is to give up using plastic. Ms. Ramsden exhorts us, “We are at a decision point on plastic pollution. It is time for corporations to turn off the plastic tap. Instead of continuing to greenwash and mislead the American public, industry should stand on the right side of history this November and support an ambitious Global Plastics Treaty that will finally end the age of plastic by significantly decreasing production and increasing refill and reuse.”

In the world that normal people inhabit, plastic containers and wrapping are valuable because they're so very useful. Being able to grab a plastic bottle of water—and to throw it out when you’ve finished with it—is a major convenience. Having grocery stores wrap vegetables and meat in cellophane allows consumers to see what they’re buying, and to transport and store them without leakage. These are not small benefits.

When New Yorkers were forced to give up plastic bags for paper or cloth at stores, the cost was steep. Both paper and cloth, it turns out, are more expensive to manufacture, and leave a larger “carbon footprint,” than the thin plastic formerly in use. Cloth bags, which are theoretically reusable, become vectors for bacteria because no one ever washes them. The plastic bottles that our drugstore items come in—what will replace that? Glass? For better or worse, we depend on plastic for many things.

Meanwhile, we await the next round of truth telling from enviros, about what else they’re making us do that is meaningless. Covid masks, anyone?