We expect policymakers to lie to us.  There is only one rule in politics and that is to maintain power at all costs.  If lies result in maintaining power, then so be it.  When it comes to politics, I classify mistruths as either “lies” or “damn lies." The former is what I consider to be a lie of ignorance or negligence.  That is, a policymaker simply doesn’t know what s/he is talking about and makes something up, is misinformed, or should have done more research before opening their big fat mouth.

What’s worse is the “damn lie.”  That’s when the policymakers know they are lying.  Most of the time the damn lie is part of political theatre.  The lie is told to smear another politician or for some other feckless purpose. What’s unforgivable is when the damn lie is an attempt to knowingly perpetrate a fraud.  When it results in harm to the public, the damn lie is utterly reprehensible.

The lies emanating from policymakers and the media at the beginning of the Covid-19 fiasco were of the lesser variety.  Politicians simply didn’t know what they were talking about.   Now, however, these have become the most insidious form of damn lies in modern American history.  They have done incalculable harm. 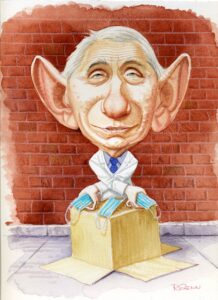 In order to determine if a person has Covid-19, one must obviously be tested.  What’s so critical about this damn lie is that it is the primary motivator of fear as well as the statistic that most likely determines mitigation policy.

The problem with PCR tests is that they are extremely sensitive.  If even a tiny amount of virus is present, the amplification process of the PCR test may render a false positive value.  As many as 43 percent of all positive values in those who present as asymptomatic may be false.  A 50 percent positivity rate is no better than random chance, so a test that allegedly has a near-100 percent specificity is actually no better at determining an infection than a coin flip.

Thus, the “pandemic” may not be anything of the kind.  Not only is the case count rendered unreliable, we’ve never been told how many positive cases are asymptomatic.

The CDC has, until recently, been exceptionally slippery when it came to determining the number of deaths of people with Covid-19 as opposed to those who died from Covid-19.  There is no transparency to this data.  Part of the problem is that, as the CDC has admitted, there is a financial incentive for hospitals to report death from Covid in Medicare patients.

Now CDC director Rochelle Walensky has admitted that some three-quarters of Covid-19 deaths had four or more co-morbidities, which dramatically alters the picture of Covid the government has been pushing for two years:

Dr. Rochelle Walensky, the director of the Centers for Disease Control and Prevention, said 75% of people who died of COVID-19 had at least four comorbidities, sparking an outpouring of commentary from people surprised by her statement and others saying, "I told you so."

The top health official made the comment on ABC's Good Morning America on Friday, days after Dr. Anthony Fauci said on TV that statistics on child hospitalizations are being overblown. Vaccine mandate skeptics have said the COVID-19 death toll was inflated by people who died with COVID-19 as opposed to dying of COVID-19, and some of them claimed they were made into pariahs or punished on social media for making these claims.

Walensky's assertion means the 834,000 deaths in the United States that have been attributed to COVID-19 could be lowered to just over 200,000.

In other words, this "terrible pandemic" that is nowhere near as severe as we've been led to believe. 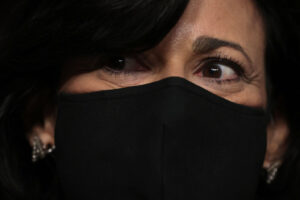 Who is that masked Walensky?

It is true that vaccine efficacy in the Pfizer and Moderna jabs are 95 percent effective at first.  The problem is we now know that such efficacy wanes over time.  Among many studies, this one from Israel demonstrated that protection waned in just a few months, and people then got infected with the Delta variant.  The Israeli data is particularly compelling because the small country’s centralized health care system is so efficient that it managed to get half the population vaccinated in just three months.  The study reported that:

The rate of confirmed infection among persons 60 years of age or older who became fully vaccinated in the second half of January was 1.6 times as high as that among persons in the same age group who became fully vaccinated in March. The data show a similar increase in rate with increasing time since vaccination in the other age groups. The rate of severe Covid-19 cases also increased as a function of time from vaccination.

One lie begets another, so the fact that breakthrough infections occurred (and continue to occur in spades via Omicron) demonstrate that vaccine mandates not only were unnecessary, but they didn’t even work.

Over and over again, studies showing that therapeutics such as hydroxychloroquine, Ivermectin, and fluvoxamine may help those with Covid-19 were suppressed.  These therapies were not investigated at all, much less with the emergency authorization protocol afforded Big Pharma’s vaccines.  Only now are we finally learning of therapeutics going through the regular FDA approval process. Yet missing from these official and approved studies are the therapeutics listed above. Why not at least give these a fair shake in clinical trials? 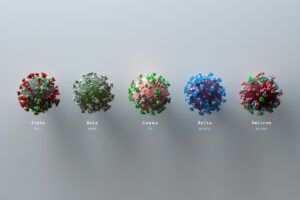 The lockdowns did not work as far as preventing the spread of the virus.  Certainly the claim that they were necessary and did no harm is an even more insidious lie.  A University of Arizona study from April to September last year found an increase in hazardous alcohol use from 21 percent in April to 41 percent in September. Dependence rose from 8 percent to 29 percent. Increased use was higher among younger people. The CDC reported that “the proportion of mental health–related visits for children aged 5–11 years and adolescents aged 12–17 years increased approximately 24 percent and 31 percent.”

The National Commission on Covid-19 and Criminal Justice reported higher crime in the 34 American cities it examined, including a 30 percent higher homicide rate, aggravated assault up 6 percent, gun assaults up 8 percent and car theft rose 13 percent. This doesn’t even address the stunting of childhood development and destruction of hundreds of thousands of businesses.

All of these lies damaged America in myriad ways. Further, the global population is now more likely to become infected after receiving booster shots than the unvaccinated.  This may explain the Omicron surge -- and portend something even worse ahead.

Journalist Matt Taibbi, who along with Glenn Greenwald is one of the few honest media people on the Left, passes along this end of the year salute to the our long national nightmare, Covid-19, and its media enablers.