When Bitcoin was first designed by the mysterious Satoshi Nakamoto, it had two key features. First, unlike paper money which can be debased by overprinting, the total supply of Bitcoin cryptocurrency units was capped at 21 million. To ensure this number is never exceeded, the mathematical task necessary to make it intentionally grows progressively harder, like an asymptotically rising cliff, until no more than the limiting quantity can be produced. Second, validating the newly mined Bitcoin was itself computationally expensive to the network so that once it was registered, it was ruinously costly to counterfeit it.

Together the two computational exercises comprised "proof of work," which supported the integrity of the concept. You couldn't make Bitcoin without expending a lot of real physical electricity; nor could you demonetize a coin and replace it with one fashioned by a politician. Chiseling out and altering a single Bitcoin or consummated transaction would change the mathematical signature of the whole blockchain of which it was part, invalidating the whole, a fantastically difficult task. That resistance to alteration made it real.

These were deliberate design choices picked to mimic the physical properties of gold. Like gold, an element which is present in only small quantities in the earth's crust, Bitcoin rarity was thus guaranteed. Like gold, which could be assayed against dilution and forgery, Bitcoin could be exactly verified and its bits engraved in the public, distributed blockchain so there could be no doubt about its authenticity. 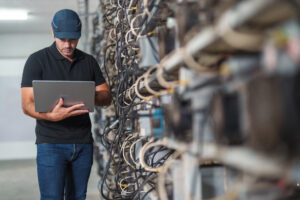 The purpose of these design elements was to insulate it from attempts at manipulation. By emulating the properties of gold, Bitcoin became attractive to the financial industry. According to Susan Arbetter of State of Politics, "The allure of cryptocurrency is that by using blockchain technology, financial transactions are instantaneous, secure and very difficult to trace."

But its success has attracted the very attention it had hoped to avoid. Environmentalists, who are always looking for some new activity to denounce, noticed that Bitcoin mining consumes more electricity than Finland, and began to condemn the process. Before long, their political lapdogs took the hint and got to work. And here's their biggest success thus far -- New York Gov. Kathy Hochul recently signed a law "banning Bitcoin mining operations that run on carbon-based power sources." According to CNBC,

Some lawmakers saw Hochul restrictions as missing the boat to the future. These include Republican Assemblyman Robert Smullen, who argues "that New York is a world leader in financial services, so why shouldn’t the state lead when it comes to cryptocurrency as well?" Smullen's concern is that even Hochul's two-year moratorium will leave New York woefully behind, and push the fast-changing finance industry out of the state.

Until recently Hochul's restrictions would have been largely irrelevant since most Bitcoin mining was done in China with cheap coal-derived electricity. Then China cracked down on mining in the summer of 2021, driven by the Chinese Communist Party’s (CCP) suspicion of anything outside its control. At its 2019 peak, China was mining 76 percent of all the Bitcoin on the planet. (America by contrast, was mining only 4 percent.) But crypto miners proved ready to move anywhere convenient. Even before China banned the practice, miners were already leaving in droves for Russia, Kazakhstan, Canada and the United States. America steadily overtook China, and by 2022 accounted for 37.8 percent of all mining, and is now the biggest player. (China remains in second, at just over 22 percent, due to the prevalence of underground miners.)

America's appeal to Bitcoin miners lies in its institutional stability. While American electricity wasn't the cheapest in the world, nothing could beat the U.S.'s combination of advantages: the large hosting capacity, ease of financing, attractive living standards. Says Darin Feinstein of crypto firms Blockcap and Core Scientific, "If you’re looking to relocate hundreds of millions of dollars of miners out of China, you want to make sure you have geographic, political, and jurisdictional stability. You also want to make sure there are private property right protections for the assets that you are relocating." In other words you want to be in America. 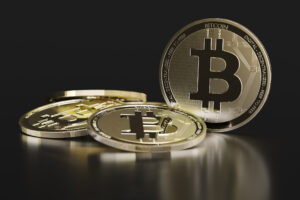 The Bitcoin mining industry now claims to be greener than the average industry: 59.5 percent of the total bitcoin mining global energy comes from renewable sources. Much of its claimed sustainability comes from rapidly rising computational efficiency. While output was up 137 percent, energy usage was up only 63 percent. What other industry could say that? The message is unmistakable: Bitcoin miners are willing to play ball with the Kremlin, the majilis, the mandarins and the Woke, for as long as they don't ask for too much.

Today, New York produces 9.8 percent of the U.S. total, behind Kentucky (10.9 percent), Texas (11.2 percent) and Georgia (30.8 percent), a real, though still-minor, a player. New York's electricity is significantly more expensive than the other three, but since New York's powergrid has the lowest carbon intensity of the top four states it can try to highlight the greenness of its electricity. And while there's a push to make "green" energy part of a scorecard to determine investment decisions, the truth is that it doesn't matter much; the authenticity of a Bitcoin does not depend on its origins. Once a particular coin is validated, it doesn't matter whether the pool which computed it was in China, Kazakhstan, Ireland or New York State. They are all equal.

One day the mining will stop, forever. After the maximum number of bitcoins is reached no new bitcoins will be issued. "Bitcoin transactions will continue to be pooled into blocks and processed, and Bitcoin miners will continue to be rewarded, but likely only with transaction processing fees." By then no one will remember Kathy Hochul. In that sense, despite its recent woes, it will also be like gold. No one holding a bar of bullion today knows who originally wrenched it from the earth, by what roads it traveled, through whose bloodstained hands it passed. Sufficient is the fact of its existence. Bitcoin in that at least aims to be like all true money.

During a campaign rally for New York's flailing governor, Kathy Hochul, Joe Biden reassured an environmentalist protestor in the crowd that, while he was president, there would be "no more drilling."

Biden to what is presumably a climate protester in the audience:

Now, it's possible that the president didn't realize where he was, or that his mic was live -- he actually appeared to stumble over his own shadow at one point during the rally -- but, seriously, is he not aware that his anti-resource policies, and the surging energy prices they've helped bring about, are killing his party in the polls just before an election? Things are so bad for the Dems that John Fetterman, their Far-Left senate candidate in Pennsylvania has been forced into a major flip-flop on this topic, claiming that he has always been "very supportive of fracking" after years of calling for it to be banned.

Chances are Kathy Hochul wasn't too happy about the exchange, considering the fact that she's having trouble holding off Republican challenger Lee Zeldin, who supports ending New York State's fracking ban. Fracking would deliver jobs and desperately needed tax revenues to those rural areas of New York where Hochul is struggling the most. Plus even New York's urban dwellers have had to deal with the state's restricted natural gas capacity. There have been instances where people who had their natural gas turned off during home renovations have found that their gas company won't turn it back on, due to insufficient supply.

And then there are prices. New York has some of the highest energy prices in the nation, a fact which has been aggravated by Governor Hochul's successful quest (and that of her predecessor, Andrew Cuomo) to close nuclear power plants in the state, such as Indian Point. Hopefully Biden's "no more drilling" pledge inspires more than a few fence sitters to go and vote out Hochul.

Fracking has become a hot-button issue on the Left, and for a number of reasons. For one thing, it's good for the American economy, so right off the bat it's bad. For another, it has something to do with icky fossil fuel extraction -- a messy business involving melted dinosaur juice that no right-thinking Harvard grad would want to get involved with. For another, it's the brutal rape of almost virginal Mother Gaia; if there's one thing the Left embraces wholeheartedly it's the pathetic fallacy, which attributes human emotions to inanimate or insentient objects.

The Democrats, naturally, object to fracking because all of the above, and reasons. As with everything they despise, they want to ban it, outlaw it, forbid it, demolish it, and destroy it. For your own good, of course.

The senile cardboard cutout once known as former vice president Joe Biden says he doesn't want to ban fracking -- a sure-loser proposition in his birth state of Pennsylvania and a state he must win in November to have a chance of unseating Trump. Especially, as the coronavirus lockdown hoax passes, with the economy bouncing back sharply. But the ideological, sentimental crazies in his party (e.g. everybody else) don't want to hear talk like that. Over at Real Clear Markets, Steve Milloy has the story:

Fracking is a key issue in battleground states like Pennsylvania, Ohio and Michigan where hundreds of thousands of good-paying jobs depend the largely state-governed process of producing oil from shale rock formations.

During the primary campaign, Biden flip-flopped back and forth on banning fracking, finally alighting on an intermediary position where he wouldn’t ban fracking outright but would act to limit it on federally-owned lands. After Biden had cemented the nomination, the firebrand [Alexandria] Ocasio-Cortez was named as a climate advisor and installed on the Democratic National Committee’s climate advisory panel.

In early June, the DNC Environment and Climate Crisis Council issued a report that called for “legislation permanently banning fracking and enhanced oil recovery and initiate a managed phaseout of existing operations.” The purpose of the report is to “recommend a sweeping set of policies for inclusion in the new four-year 2020 Democratic Party platform, which will be approved at the August convention.”

While it is not uncommon for presidential candidates and their party platforms to often diverge, is the fracking fracture between Biden and the Democratic Council more significant? Of course it is.

Read Milloy's piece in its entirety, which goes on to argue that the feeble, demented Biden will be a pushover for the radicals. But that gives Trump an opening, not only in places like Pennsylvania (the keystone to winning the election; if Trump loses Penn., it's over), but also Ohio, Michigan, Indiana -- all of which Trump won in 2016. The big prize of New York State, even in its declining dotage, could also be put into play. Thug governor Andrew Cuomo has banned it in his state, but long-suffering western New York and the Southern Tier would welcome it. Biden may think he's got NYS in the bag, but even a strong feint by the Trump campaign in the direction of Rochester, Buffalo, and Elmira could force Biden to play defense.

Biden may deny he would ban fracking. But the question for voters should be, would it really be up to him? Panicked Democrats are now trying to back away from the DNC report calling for the fracking ban. A “senior Democrat familiar with the DNC’s workings” said to Reuters of the recommended fracking ban, “It’s a nonstarter.” About the Ocasio-Cortez-led DNC climate panel, the understandably anonymous source said, “Nobody takes them seriously.”

That will be disconcerting news to the likes of Ocasio-Cortez and all the Bernie Sanders supporters who, as it is, already have to hold their noses and vote for Biden.

If he cares about his country at all, Biden has a chance to put down the AOC rebellion and do the right thing. But of course he won't.