All visible objects, man, are but as pasteboard masks. But in each event — in the living act, the undoubted deed — there, some unknown but still reasoning thing puts forth the mouldings of its features from behind the unreasoning mask. If man will strike, strike through the mask! How can the prisoner reach outside except by thrusting through the wall?

So now the mask slips and the truth is revealed: it was never about masks, or Covid, or "the science" at all. It was always—and always will be—about power. The Long March through the Institutions, the hallmark of the Frankfurt School's assault on the Western democracies, has now claimed its latest and thus far biggest prize.

Who had the collapse of Canada as a functioning democracy on his bingo card? It was disheartening enough when Australia (with a "conservative" prime minister) fell, and that disarmed and benighted nation quickly transformed from the land of Mad Max and Crocodile Dundee back into the British penal colony it always was.

But Canada? Granted, what became in 1867 the Dominion of Canada was comprised in part by American loyalists who rejected the separation from the motherland in the late 18th century and moved northward. Canadians also rightfully resented American incursions into their territory during the War of 1812 (a war much celebrated in Canada and totally ignored in the United States as the embarrassing mess it was). But since then, Canada has been America's closest ally. Canadians have long distinguished themselves in war, especially during World War I, where their service at Passchendaele, Ypres, and the Somme has become the stuff of military legend. Until the pestiferous arrival of Justin Trudeau as prime minister, no two countries were closer or had a more amicable relationship than Canada and the U.S. 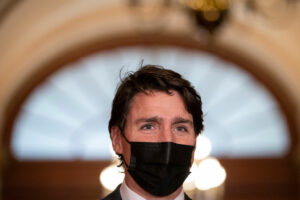 Who is that masked man, really?

Now, in the blink of an eye, that relationship has been imperiled by Trudeau's abrogation of representative, parliamentary democracy via his mini-Machtergreifung last week. In this outrageous and disgraceful action he has been aided and abetted by his deputy prime minister (and finance minister) Chrystia Freeland (Harvard, Rhodes scholar), whose journalist grandfather was reportedly a Nazi collaborator during the war. Coincidentally  she is married to a reporter for the New York Times, and is a former journalist herself.  Of Ukrainian descent on her mother's side, the steely, multi-lingual Freeland has emerged as She Who Brings Down the Hammer:

This is about following the money. This is about stopping the financing of these illegal blockades. We are today serving notice: if your truck is being used in these protests, your corporate accounts will be frozen. pic.twitter.com/AJ73zdDMy5

In her remarks following Trudeau's act of nation-destroying pique, she said this:

Around the world, liberal democracies have been facing serious and sustained threats. We may have thought – we may have hoped – that Canada would be spared. Over the past two and a half weeks, we have learned that it is not. This occupation and these blockades are causing serious harm to our economy, to our democratic institutions, and to Canada’s international standing... That is why our government is taking action. We are resolute and determined. These illegal blockades must and will end. What we are facing today is a threat to our democratic institutions, to our economy, and to peace, order, and good government in Canada. This is unacceptable. It cannot stand and it will not stand.

"Our democracy," indeed. A dedicated leftist, Freeland is a member of the board of trustees of the World Economic Forum, the most dangerous threat to real democracy and freedom in the world today. Led by Klaus Schwab, whose Strangelovian accent would make Laurence Olivier's demented dentist Dr. Szell blush, the WEF is the force behind the Great Reset, a cross between the dystopian visions of Orwell's 1984 and Huxley's Brave New World as run by Daddy Warbucks and Dr. Evil.

Like SPECTRE, Schwab and his Resetters (whose numbers include, of course, Britain's Prince Charles, the scion of a family of anglicized Germans who trace their lineage back to the houses of Hanover and Saxe-Coburg und Gotha), seek nothing less than global power and influence—and in fact have already achieved it:

“So we penetrate the cabinets”.

Here is Klaus Schwab in 2017 discussing how the WEF have penetrated governments with its young global leaders - like Justin Trudeau.pic.twitter.com/07M6LDPHot

The punitive reaction to the Freedom Convoy was only unexpected in its timing. While most Western governments have been relatively silent regarding Trudeau's sudden coup, the media has generally cheered, reflecting their Ivy League loathing of the working classes and their lip service to republican democracy. Just as they celebrated the fiery, "mostly peaceful" BLM and Antifa riots during the summer of 2020, so they've (baselessly, to use one of their favorite words) depicted the truckers as racists and Nazis, taking their cues in that regard from Trudeau himself.

Protests aren’t emergencies, and Western leaders had better get used to handling civil disobedience firmly without traducing civil liberties. Mr. Trudeau criminalized a protest movement, deputizing financial institutions, without due process or liability, to find and freeze personal accounts of blockaders and anyone who helps them. These extraordinary measures are a needless abuse of power.

When the Emergencies Act was first passed, critics were assured “emergency powers can only be used when the situation is so drastic that no other law of Canada can deal with the situation.” In abusing these powers for a nonemergency, Mr. Trudeau crossed a democratic line. Canadians wanted the blockades to end, but it never should have come at the expense of the rule of law.

Amazingly, and to its credit, so did the editorial board of the New York Times, meekly defending the right of peaceful protest, something Trudeau, Jr., had once claimed to champion:

We disagree with the protesters’ cause, but they have a right to be noisy and even disruptive. Protests are a necessary form of expression in a democratic society, particularly for those whose opinions do not command broad popular support. Governments have a responsibility to prevent violence by protesters, but they must be willing to accept some degree of disruption by those seeking to be heard. The challenge for public officials — the same one faced by Minneapolis and other cities in 2020 during the protests after the murder of George Floyd — is to maintain a balance between public health and safety and a functioning society, with the right to free expression. Entertaining the use of force to disperse or contain legal protests is wrong. As Mr. Trudeau said in November 2020, in expressing his support of a yearlong protest by farmers in India that blocked major highways to New Delhi, “Canada will always be there to defend the right of peaceful protest.”

One of the obstacles to understanding the malign intentions of the Davoisie and its fellow travelers in this mésalliance of corporate leaders and government officials—one of the textbook characteristics of Fascism, along with the employment of private militias to subvert the democratic process—is the highly successful campaign the international Left has waged since the collapse of the Molotov-Ribbentrop Pact under exigent circumstances in 1941, mostly via the media, to convince you that National Socialist Germany and the international Union of Soviet Socialist Republics were somehow antithetical, when in fact they were two sides of the same hellish coin. The nickname "Nazi" (almost never used by the members of the NSDAP themselves) derives from the first two syllables of the German word for "national," and was used to distinguish National Socialists from the "Sozis" in common parlance.

Today, the bonzes of the WEF hide behind their ostensible capitalism and stupefying wealth to deflect any notion that they are aligned and allied with the international Left: how can we be both pro-capitalist and pro-communist at the same time?  (Maybe they should ask Davos regular and former Nazi collaborator, George Soros.)

The sad and sobering part is that some two-thirds of Canadians approve of the Trudeau government's curtailment of the Canadian Charter of Rights and Freedoms, which guarantees freedom of conscience and religion; freedom of thought, belief, opinion and expression, including freedom of the press and other media of communication; freedom of peaceful assembly; and freedom of association. But as in Britain, Ireland, Australia, and the U.S. Canada's major media are strongly pro-government (as long as that government tilts left) and will not brook any opposition to their love of internationalism. If that means rights have to be shelved "for a limited time," well you know the old saw about omelets and eggs. It only took two years to end "two weeks to flatten the curve."

As Ahab says in the passage quoted above, from Chapter 36, "The Quarter-Deck," of Moby Dick: "If man will strike, strike through the dumb mask! How can the prisoner reach outside except by thrusting through the wall?"

How indeed? Especially when the wall strikes back.