Two goals exist in the attack on energy by the Left. By focusing on their secondary goal (the environment), Democrats accelerate toward their primary goal: destroying the global middle class. This is the demand of the Great Reset and the politicians they own in the western democracies.

A year ago we thought we were free. Today we find our energy industry under attack, ourselves unconstitutionally locked-down in urban complexes, growing increasingly distrustful of others due to useless masks and media lies, with food and housing so expensive that families are not formed, and children becoming a thing of the past.

Oh – and travelling not at all – no planes, and electric cars with an overnight stay at a hotel while “fueling” a car rather than the current ten minutes for the next 400 miles of seeing what once was a free country. 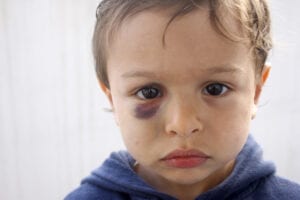 They hate your children too.

Killing energy kills the middle class, the foundation of global democracies that arose through and via the Industrial Revolution, the cornerstone of which was using energy resources (coal, oil, water) more productively than ever before.

Without a middle class, the only possible society remaining is a post-modern serfdom, living and working where, how, at what and for a labor price our betters command. The advance of Big Tech is being encouraged no longer to better our lives, but to better surveil us and to increase the homogenizing of work, speech, thought and culture as demanded by a literal handful of unelected, unaccountable billionaires who think because they’re rich they must be smart (they’re not), and that what they think is “right."

This is the story of tyrants throughout history. And, like all tyrants, these, too, are enemies of people, families, nations, cultures and progress.

As we move farther into the Information Age, what happens to those not able or willing to move into a career that entails staring at a screen all day? What happens when the work of anyone (other than a parasitical politician or indolent bureaucrat) can be offshored to anyone, anywhere on the planet?

Labor needs traditionally have been a community or a national question. The Resetters reject these needs and desires, so intent are they upon forcing us to do their bidding.

This is not a jeremiad against technical progress or a rejection of living standards that unquestionably have advanced due to the digital revolution. It is a demand that those who have most profited from these advances are not allowed, undemocratically, to use their profits to destroy the middle class.

As a culture progresses in resource productivity (food, water, energy, labor) this increased productivity allows that society to create a cohort that pursues specialization, education, travel, art, literature and leisure – the things that make life more than a short, brutal, hungry trudge from cradle to grave. The more productively a society can use resources, the more the living standards of that society increase across all socioeconomic classes. 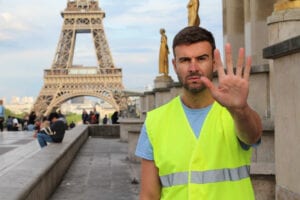 The entire world benefits from the Western middle classes: the wealthy who invest in and benefit from their education, inventions and work, the leisure industries in which they participate, and the benefits a now-wealthier society can distribute to the less-well-off.

But that need for a middle class remains until the need for labor itself is vanquished, as long as we require food, water, shelter, clothing and energy, i.e., as long as people exist. The need for those with skills lacked by the rest of us, indeed, increases: fewer of us every generation can run a water main, repair an electrical problem in our home, or harvest our own food. If advancing technology means one worker can do what ten once did, the need for that one is more, not less, critical. If one of ten no longer can work, the other nine can supply the labor. If one of one no longer can work, who is going to repair your oven?

Trade encouraged by a world shrinking due to industrialized transportation productivity has encouraged lower-skill occupations to migrate to toward what we call the “First World.” This has provided their populations with jobs through which they could advance their standards of education and living, bettering humanity as a whole. As these populations advanced, lower-skill work travelled to less-advanced nations. Wholesale removal of work from Western middle classes for reasons of labor costs alone, however, causes nothing but destruction.

Paying workers in other countries less money to do jobs that have been relocated from the First World specifically to reduce labor costs, cannot help but reduce living standards of the First World. This decelerates all progress globally, including environmental progress and the support of benefits for the poor. 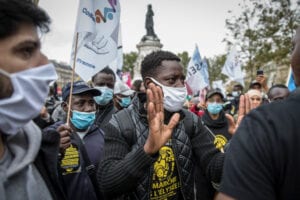 Marching for "migrants' rights" in Paris.

The plain fact is this: Western “leaders” no longer value the living standards of their populations. This is past-evident in the intentional failure of education and the offshoring of jobs over the past two generations. Reduced living standards are their goal.

At some point – the point we've likely already reached – either we retain manufacturing and energy production jobs rather than shipping them to less-advanced countries at a lower price, or those who can’t “learn to code” become a detriment to society in the eyes of the “leaders” of that society. Then what?

By killing the Keystone XL pipeline and attacking similar pipelines, as well as protesting against LNG port facilities, the useful idiots of the left are placated in the name of the non-existent global-warming hypothesized by many but supported by nothing.

The entire drive to reduce energy consumption (not theirs, of course), to embrace socialism and Progressivism and the tyrannical Great Reset, is fostered by those who know the terrible harm it will cause to the people of the world… and simply do not care.