Whatever final assessment is made of Donald Trump’s culpability in provoking the Capitol melee – though it was at most, it seems to me, incidental - the speeches by some Democrat congressional representatives, in the lead up to impeachment number two, took hyperbole to a new level -- e.g., “a white supremacist president who incited a white supremacist insurrection.” Little reverence was paid to the truth. In keeping with the times, none to giving the accused right of reply.

Part of the overwrought response to Covid is suppression. Suppression, that is, of questioning views. Big tech plays its part. It has become adept at closing down rather than opening up debate

Muzzling the climate debate is a practiced art. Australia’s taxpayer-funded academic blog site The Conversation sums it up: “That’s why the editorial team in Australia is implementing a zero-tolerance approach to moderating climate change deniers, and sceptics. Not only will we be removing their comments, we’ll be locking their accounts.” So much for two sides of a story.

Wherever you look, large sections of today’s society are losing their interest in the truth and, as part of that, in being challenged. Integrity is falling away. Though prosaically, when set against today’s times, Sheriff Ed Tom Bell spotted things going wrong in 1980:

Had this questionnaire [in the nineteen thirties] about what was the problem with teachin in the schools...the biggest problem they could name was things like talkin in class and runnin in the hallways. Chewin gum....sent em back out to the same schools. Forty years later. Well here come the answers back. Rape, arson, murder. Drugs. Suicide...when I say anything about how the world is going to hell in a handbasket people will just sort of smile and tell me I’m getting old...my feeling about that is that anyone that cant tell the difference between rapin and murderin people and chewin gum has a whole lot bigger of a problem than what I’ve got.

Cormac McCarthy’s No Country for Old Men is blessed with Sheriff Bell’s homespun commentaries on life and the state of his modern world. To me Bell (Tommy Lee Jones in the movie) was the highlight of the book. It’s a pity only a sprinkling of his wisdom made it to the screen.

The storyline in the book is set in Texas in 1980. I don’t know about you, but without dismissing Bell’s concerns, I look back fondly on the 1980s, when Ronald Reagan, Margaret Thatcher and Pope John Paul II were simultaneously strutting their stuff. How much saner was the world then, I think.

Of course, to take a potted excursion back to the start of that decade, there were no flat-screen TVs, mobile phones, the internet and email. I would miss them if they were suddenly taken away. Many people, I understand, would also miss social media and electric cars. Me, not so much. What would Sheriff Bell have thought? Technological developments are part and parcel of human history and his response to them would depend on whether he was parachuted into 2021 from 1980 or had lived throughout the period.

It gets more interesting when social developments are considered. Take trigger warnings, micro-aggressions and safe spaces, cancel culture, transgender dysphoria, non-binary pronouns, unconscious racism, intersectional wokeness, and the like. To reach the point quickly. I don’t think Bell would have rightly understood them. I say that because I am younger than Bell, he was close to retirement in 1980, and I can’t get a good handle on them.

From chewing gum to drug-taking is a leap, but it’s not one of confounding inexplicability. In contrast, how do you put a 1980’s perspective, or any reasoned perspective at all, on things like trigger warnings and cancel culture? How do you explain their rise?

The short answer is that I don’t exactly know. Some people associate it all with Marxism. I am not sure about that. Of course, the popularity of Marxism, socialism more generally, is on another one of its periodic cyclical upswings among academic and political classes. Socialists are indefatigable in the face of the historical record of socialism’s disastrous failures, whenever and wherever it has been tried. They forever lurk in the shadows, awaiting propitious circumstances to again hawk their bill of goods.

I sometimes look to that old-time socialist George Orwell for answers. I reckon he’d have the same view of these modern social trends as would Sheriff Bell. Here he is in The Road to Wigan Pier: “One sometimes gets the impression that the mere words ‘Socialism’ and ‘Communism’ draw towards them with magnetic force every fruit-juice drinker, nudist, sandal-wearer, sex-maniac, Quaker, ‘Nature Cure’ quack, pacifist, and feminist in England.” Different times, different fruit loops. 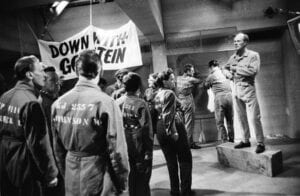 And not just Goldstein.

Socialists having an irreducibly delusional mindset. This no doubt gives loopy ideas a happy home. But they don’t arise there. They are a broader cultural phenomenon. This time around they have arisen, I suggest, out of post-modernism and its rejection of the oneness of truth.

You might define a man and a woman by their chromosomes. That’s just your truth. Another truth is how they feel about themselves, gender-wise. You might define free speech as, simply, ‘free speech’. Sorry, but not if it offends someone in a minority group. Then it is hate speech. You might think it is discriminatory to favour someone on the basis of their appearance. No, not true, if it produces more ‘equity’ across society. Equality bad, equity good – to borrow a pattern of words again from Orwell.

Old generations always complain about the next one. At least -- so it is said -- since Socrates was supposed to have done so. This is a cautionary warning for any older generation. Nevertheless, Sheriff Bell ventured forth. To him there had been a sea change. Something untoward was happening. Untoward has morphed into strange indeed.

It’s best to remember, civilisations eventually fall apart. Seems likely this has something to do with the way in which succeeding generations live their lives and mould their culture. Robust pursuit of truth is surely the quiddity of a healthy culture. Once that goes who knows where things will end up.

Sheriff Bell thought the world was going to hell in a handbasket. He had no idea what lay in store.