Well, it’s true – he has said it many times, especially near the end of the campaign in 2020. The phrase has been a staple of the Democrats’ repertoire of cliches, right up there with “good-paying jobs,” “build back better,” and promises to “shut down” Covid-19. And it’s also true that we are, indeed, a battle for the soul of America – although references to “soul” are pretty funny coming from the party of slavery, segregation, secularism, and sedition. 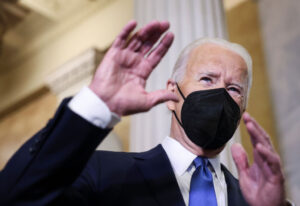 Pretty funny coming from a party that traces its lineage back to slaveholder Thomas Jefferson’s Democratic-Republican party, and whose first vice president, Aaron Burr, shot and killed Alexander Hamilton, one of the Founding Fathers.

Pretty funny coming from the party that seceded from the Union upon the election of the first Republican president, Abraham Lincoln; took up arms against the United States; fought a bloody civil war; and assassinated Lincoln just a few days after Lee’s surrender at Appomattox in 1865.

Pretty funny from the party that founded, aided, and abetted the Ku Klux Klan, declared “segregation now, segregation tomorrow, segregation forever,” and steadfastly opposed civil-rights legislation from the presidencies of Andrew Johnson to that of Lyndon Baines Johnson, when it suddenly discovered the power of the black vote.

Pretty funny coming from the party that honored its first official “Democrat” president, slaveholder Andrew Jackson – the man who forcibly evicted the Indians of the Southeast and sent them on their way to Oklahoma (“Indian Territory”) via the infamous Trail of Tears – with annual Jefferson-Jackson Dinners across the country, an event that has since changed its name to, among things, the Liberty and Justice Celebration, the Hoosier Hospitality Dinner, the Humphrey-Mondale Dinner, the Johnson-Jordan Dinner, the Kennedy-Clinton Dinner (whoops!), and the Eleanor Roosevelt Dinner.

Pretty funny coming from the party whose most notable president, Franklin Delano Roosevelt, prolonged the Depression from 1933 to 1941 thanks to his quasi-socialist economic policies (FDR was an open admirer of Benito Mussolini until that became politically impossible) and then rounded up loyal Japanese-Americans after the attack on Pearl Harbor and sent them to concentration camps – with the support of a Supreme Court that Roosevelt had earlier browbeaten into compliance with his policies by threatening to “pack” it. (A tactic the current Democrats are once again considering in order to bring the Court to heel.)

And pretty funny coming from a president who has sided throughout his career with racist Democrats like the late Robert Byrd (a former member of the Ku Klux Klan), who was praised by George Wallace, who viciously attacked Supreme Court Justice Clarence Thomas at his confirmation hearings in 1991, and proudly boasted that his home state of Delaware – a slave state throughout the Civil War, even though it stayed in the Union – was “culturally part of Dixie.” A president who, in a speech in Georgia, just called opponents of the Democrats’ bid to federalize national elections “domestic enemies.”

In sum, what does it tell you about a party that has to run this hard, this fast and this far away from its own past? About a party that has to resort to claims that the two parties somehow miraculously “switched sides” at some point between the LBJ and Nixon administrations (even though there’s absolutely no evidence that it ever happened)? A party that wants you to forget just about everything it’s stood for until five minutes ago?

It tells me they’re not to be trusted, no matter what they say. Writing as my fictional left-wing lunatic character, David Kahane, in the pages of National Review in 2009, I called them “a criminal organization masquerading as a political party,” and followed that up in 2012 with a short pamphlet called The People v. the Democratic Party, in which I explored the Democrats’ sordid history at some length.

And these are the people with whom we are engaged in a battle for the soul of America.

However, no matter how often the Democrats wrap themselves in the flag, execrate the memory of the Trump presidency – which they view as an unfortunate interregnum between the Obama administration and what is now the third Obama term, with perhaps (if Michelle runs to supplant Biden in 2024) another one or two to come – and, increasingly, regard any opposition as not only unprincipled but seditious, they still can’t run away from their past. Unfortunately for us, their past is just prologue.

Manzanar: brought to you by the Democrat Party.

For all their talk about “our democracy,” the Democrats have never believed in a pluralistic, republican society. Their neo-Jeffersonian ideal is a borderless (and thus unlimited) political entity led by aristocrats with money, education, and social standing, lording it over a vast but tractable plantation of serfs, peons, and other deplorables. (Think Mexico.) The “democracy” they’re building embraces Ivy League graduates, tech zillionaires, familial networks, globalist proclivities, a permanent bureaucracy of “experts” (a legacy of another Democrat president, Woodrow Wilson), and a religion that worships Mammon, not God.

As fast as they can, they are rendering irrelevant the idea of federalism in favor of a concentration of power in a few hands in Washington, D.C., a neutered Congress, and rule by executive order that evokes nothing less than ancient Rome during the violent Caesarian transition from Republic to Dictatorship. Slowly, steadily during their long march through the institutions they have nationalized medicine, fundamentally transformed the military from a fighting force to a sure-to-be-fatal exercise in diversity, inclusion, and equity, destroyed public education, demolished the monuments of the past and, should they stay in power, promise you a “Great Reset” future in which you’ll own nothing, like it, and dine on bugs.

Like the Wizard of Oz, Joe Biden shouts at you to pay no attention to the figurehead standing at the podium while his wicked witches and flying monkeys ready another assault on America-as-founded and its institutions. Biden and his party answer to a higher authority, perceive an arc of history that bends toward their idea of “justice,” and will “by any means necessary” compel your conformity. They wake up every morning and ask themselves: how can we punish our enemies today? And then they set about doing just that.

So Biden was right. He’s said it many times. This really is a battle for the soul of America. And you’re the enemy.