The U.K.'s new prime minister, Liz Truss, finds herself in an unenviable position. Britain -- along with the rest of Europe -- is facing out-of-control energy prices with winter fast approaching. Her predecessor, Boris Johnson, by unreservedly embraced his wife's net-zero enthusiasms, left the country's domestic energy industry in a parlous and perilous state. And the Labour Party has risen in the polls in part by proposing a massive windfall tax on what they suggest are the "excess profits" energy companies are pulling in due to the rise in oil and gas prices that have followed Russia's invasion of Ukraine, and using it to fund a "price freeze" on British energy bills.

Hoping to stall Labour's rise, the Johnson government enacted its own (smaller) windfall tax, but Truss has announced her intention to scrap it immediately, arguing that it amounts to a punishment for firms that invest in Britain. Instead she has proposed a plan which might be even more radical -- a "price freeze" funded by all British tax payers. Starting October 1st, British households will pay no more than £2,500 per annum for the next two years.

(Labour's plan, it is worth noting, would also have been largely funded by the taxpayer, because their windfall tax wouldn't have come close to paying for their pricing plan. But it sounds better to say that greedy oil companies are footing the bill.)

Of course, in reality there is no such thing as a "price freeze." What the plan actually amounts to is the government paying the bills that aren't covered by that £2,500 per household. Which is estimated to amount to a lot of money. How much exactly is unclear -- we don't yet know how real energy rates will go this winter or how cold it will get. Though, as Kate Andrews says at The Spectator, "a less generous package... was estimated earlier this week to be approaching £200 billion." It would be surprising to see this proposal cost less than that. Andrews points out one of the great dangers of this plan -- that it makes winter blackouts more likely:

We have a global shortage of energy – an ugly reality that domestic governments can do nothing about overnight. Truss’s decision to lift the fracking moratorium signals that the government wants to increase domestic energy production, but the policy change is unlikely to produce any quick or meaningful uptick in supply as local areas – which get the final say on whether fracking goes ahead – remain deeply opposed. So, we all need to use less energy this winter.... But by covering so much of the cost, Truss’s government has removed a lot of the incentive to cut back energy usage. Indeed, some people will probably increase their energy usage as bills will be so heavily subsidised by the state.

Economics 101 tells us that price increases are, in essence, a response to scarcity. By picking up consumers energy bills beyond a fixed point, said consumers are shielded from the reality of scarcity and consequently have no reason to consume less. This is especially true, Andrews argues, for wealthy Brits, whose bills will be capped at the same semi-arbitrary amount as the poor, despite their being better able to afford higher rates while also having bigger houses to heat and power. Instead of turning down the heat, they and their countrymen are just as likely to turn it up.

Truss's counter to these objections would no doubt be that there are really no good options, which is often the case in a crisis. Her hope is that keeping energy prices lower at the point of consumption will help get inflation under control, off-setting a new round of massive debt accumulation (and so soon after Covid lockdowns necessitated record borrowing of its own), while giving her other pro-energy, pro-free market policies a chance to beef up domestic production and turn the economy around. And, hopefully for her, just in time for the next general election, to be held no later than January, 2025.

Maybe it will work. But it's a hell of an expensive bet.

Observing the United Kingdom sailing headlong into a sea of troubles over energy and inflation, a cynic might well say: “Lucky Boris Johnson—he was forced out of power at exactly the right moment. Someone else will now have to carry the can.” It’s true that Britain’s economic troubles, which were already growing, have metastasized dramatically in the last few months, two in particular—a general rise in all-round inflation to 10 percent and a still sharper rise in regulated gas and electricity prices from $2,331 now to $4,237 in October and $5,026 in January.

Together they add up to a massive “cost of living crisis.” And because they grow out of deeply-rooted problems and self-destructive policies in the U.K.’s long-term economic strategy, it will take time and tough remedies to eradicate them.

As always, however, there seems to be an inexhaustible supply of people lining up to carry the can. About a dozen senior Tories put forward their names to succeed Boris at the start of the Tory leadership election. They were whittled down to two of Boris’s ministers—former Chancellor Rishi Sunak and current Foreign Secretary Liz Truss—who are fighting a battle of debates on economic policy across the country in front of Tory voters and activists. We’ll know the result by September 5, with Truss now the favorite. 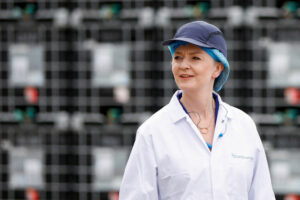 [My own snapshot take: she’s the better bet on supply-side and de-regulation policies to improve productivity and revive British industry; he’s the safer pair of hands on financial and budgetary policies to restore a stable financial framework that would help the economy to expand without overheating. But both should be more prepared to cut state spending and borrowing.]

Whoever wins the premiership then, however, will have to face a general election within about 28 months. Given the severity of Britain’s problems, the Tories will undoubtedly face an uphill battle. That means Sir Keir Starmer, Leader of the Opposition, must now be taken seriously as a potential prime minister.

And indeed Sir Keir, a progressive left-wing lawyer before entering politics, whose usual pained expression is that of a man who has just swallowed a live fish out of politeness at a diplomatic dinner, and who has been struggling to make an impact on the electorate, has been given a shot in the arm and buoyancy in his step by the crisis.

Labour is demanding the recall of Parliament to debate the “cost of living crisis.” That’s quite a shrewd demand since Johnson is now a “caretaker” Prime Minister who constitutionally has to leave all major decisions to September the 5th and his successor. Starmer's attack on the Tories as a “do nothing” government in the face of the cost of living crisis then carries more weight. By contrast, he was able to step up to the plate with his own remedies in a speech that was better received than any earlier efforts and proposed solutions that according to opinion polls are in tune with the popular mood.

Those solutions—an energy price “freeze” paid for by the $34 billion proceeds of a higher windfall tax on oil and gas producers— are not new. They have been kicking around the Labour party’s thinking on energy since two leaders ago. And when Rishi Sunak himself was chancellor only a few months back, he introduced a much milder $6 billion version of the same thing which he delicately called a “temporary, targeted energy profits levy” of 25 percent. (It came accompanied by a 90 percent tax relief for firms that invest in oil and gas extraction in the U.K.) 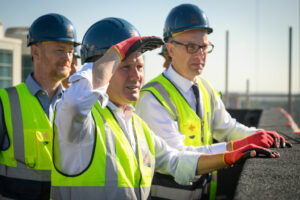 The problem with such “concessions” to opposition attacks and the popular mood is that they concede the principle without satisfying the demand. Worse, they make Labour’s proposals look like common sense to which the Tories are offering only a miserly response.

Commonsense is a rare and valuable commodity in public life, but economics is one of the very few areas where it can’t be applied wholesale. Commonsense suggests that we should charge lower fares for railway journeys at rush hours when the trains are crowded and uncomfortable. Economists respond that we should charge higher fares then and lower fares at off-peak times to encourage people to travel in less crowded and more comfortable conditions at all times. If we ignore them, commonsense ensures that we end up strap-hanging for hours in cattle cars.

In the same way the economically sensible response to higher energy prices is to devote state assistance to cash subsidies to the consumer—with larger subsidies going to poorer people for whom energy is a bigger proportion of their total spending. People then get to decide whether to devote this increase in their income to energy, to food, or to their other household needs. They know those needs better than “the Man in Whitehall.”

Given this full responsibility over how to spend their total income, they would be free to change their behavior by, for instance, using less power than usual. Moreover, high electricity prices, for instance, would give them further encouragement to do so, thus reducing demand for electricity, oil, and making a gradual start to solving the energy crisis in general. 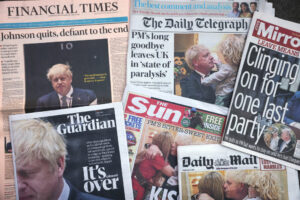 So much for the demand side. On the supply side, as long as prices remain high—and any decline would likely be gradual—energy companies would have the incentive of high profits to search for new oil and gas fields and to re-open old ones closed in response to regulation. (We already see that happening.) Even as demand was being moderated by high prices, supplies of energy would be encouraged and increased by them. The energy market would come into balance, and other things being equal, prices would fall.

Which is why a windfall-profits tax is both mistaken economically and unjust ethically. A bold claim, I hear you say. But as it happens, with help from an old friend and colleague, Philip Lawler, I wrote a classic article on the Case against a Windfall Profits Tax thirty-three years ago. Originally I “ghosted it” for the U.S. Treasury Secretary, William Simon, who a few years later gave me permission to publish it under my own name which I have now done in National Review and the Spectator Online.

Immediately on entering office in 1981, Ronald Reagan blew away a  ramshackle maze of overlapping agencies and bureaucratic bafflegab; de-controlled energy prices and production; and led the world into a sustained three-decade boom floating on a sea of cheap oil and gas. It looks as if the Brits have decided to go in the opposite direction—and if Labour wins in 2024, with their foot on the accelerator.