Few 21st century adults believe in Santa Claus, at least not in the small-scale Santas in department stores, who are obviously employees, nor in the old man reputedly at the north pole who yearly presides over a supply chain of elves to deliver billions of presents each year on Christmas eve.

Yet many of these same sophisticated skeptics nevertheless believe in the existence of Santa Claus on a far larger scale, who give away trillions, convinced government can pay for things so taxpayers don't have to. According to the New York Times columnist and Nobel Prize laureate Paul Krugman, Washington could scare the public into accepting printed money by faking a space alien invasion:

“If we discovered that space aliens were planning to attack, and we needed a massive build-up to counter the space alien threat, and inflation and budget deficits took secondary place to that, this slump would be over in 18 months,” Krugman says, referencing an episode of The Twilight Show [sic; should be The Twilight Zone] in which an alien threat was manufactured to bring about world peace.

To them Santa looks like Joe Biden who has promised to make sure everyone, including foreign dictators who don't believe in Christmas, gets presents under the Christmas tree  paid for with debt.  "Just after midnight, the House passed a bill to raise the debt limit by $2.5 trillion, sending the bill to President Biden’s desk just in time for the deadline... that should allow the U.S. to pay its bills through 2022 and into 2023."

What's the matter, afraid of something for nothing? Don't worry the elves in Washington, D.C., have an ideology, called Modern Monetary Theory, to explain why all our debts will be paid by the Future. If government spend its it will come.

For these advocates of modern monetary theory, the insistence by both political parties that all the $550 billion of new spending be matched by offsetting revenue, known as “payfors,” goes against their belief that money is merely a tool for government.

MMTers detest payfors as wrongheaded thinking about money. Money only exists because of government spending, and under MMT, the government should just create as much as it needs to finance its projects. In a tight economy—like we have now—MMT might want offsets to new spending. But higher taxes or lower spending elsewhere would be aimed at avoiding inflation, not at balancing the budget... The most important claim of MMT is that a government need never default on debt issued in its own currency."

It's like having an irrevocable credit card. And it won't cause inflation, MMTers argue, as long as government taxes the rich enough to take the printed money out of circulation. "Taxes are, they concede, sometimes necessary to stave off inflation, and as a consequence, preventing inflation can require cutting back on deficit spending by hiking taxes. But the lower inflation caused by higher taxes is not an effect of 'lowering the deficit'; the lower deficit is just an artifact of the choice to raise taxes to fight inflation." So long as inflation is kept low enough to match the real rate of growth that somehow arrives from the future this process can continue indefinitely.

But this is intellectually unsatisfactory. Who is this future Santa? Why is the future necessarily fecund, such that humanity can rely on it to pay its debts? The probable answer is that life, if not stifled, gets "smarter" as time goes. It struggles to its feet despite government burdens. The definition of life is that it grows. It finds ways to turn natural "free energy" into information and intelligence that 'transformative' governments can use to pay their bills.

Entropy reduction is another way of saying bringing order from disorder. As Jeremy England of MIT recently argued, life may well have originated as process of dissipating the energy that was so abundant in the universe by inventing patterns. As England put it, "a great way of dissipating more is to make more copies of yourself.” Life turns energy into information and that energy was present at the outset, all the way back to the Big Bang or its equivalent. We discover it's Santas all the way down! 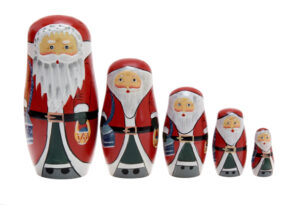 This Santa business turns out to be more puzzling than it initially seems. Gottfried Leibniz posed it as what may be the greatest philosophical puzzle of all, namely: why is there something rather than nothing? "The question is a challenging one because it seems perfectly possible that there might have been nothing whatsoever – no Earth, no stars, no galaxies, no universe." This puzzled even the great fictional detective Sherlock Holmes, who remarked to Watson in The Naval Treaty:

“Our highest assurance of the goodness of Providence seems to me to rest in the flowers. All other things, our powers our desires, our food, are all really necessary for our existence in the first instance. But this rose is an extra. Its smell and its colour are an embellishment of life, not a condition of it. It is only goodness which gives extras, and so I say again that we have much to hope from the flowers.”

In this Christmas season, when even the Davos Economic Forum itself has been postponed by the pandemic, it is well to recall that it is life that resets institutions, not the other way round. That the Great Reset has been reset should be humbling. As governments fruitlessly plot to control the climate as if it were some oversized air conditioner, in various countries humble life will work a miracle. Parents will give their children gifts they can hardly afford, especially in this time of inflation; a cheap sweet, a hand enhanced article of clothing, some plastic thing from China, paid for perhaps by dint of missed meals and foregone bus rides. And the earth will continue to move. For while nobody believes in department store Santas, Leibniz's question remains: "who lit this flame in us? No war can put it out, conquer it." What made life grow? Perhaps only faith can explain it.