Golly, this story out of Canada sounds so familiar:

Provincial agriculture ministers are expressing frustration with the Trudeau government over plans to effectively reduce fertilizer use by Canada’s farmers in the name of fighting climate change.... The federal government is looking to impose a requirement to reduce nitrous oxide emissions from fertilizers saying it is a greenhouse gas contributing to climate change.... The Trudeau government is demanding an absolute reduction in emissions, which farmers say will result in less food being produced at a time when the world can ill afford it.

Now where have we heard of similar government demands happening recently? Oh, well, in the Netherlands for one, where farmers in the world’s second-biggest agricultural exporter blocked roads and sprayed manure on government buildings after their environmentalist government attempted to force them to drastically cut their livestock numbers and sell their land to the government in order to cut emissions by 50 percent by the year 2030.

The Dutch farmers have had enough.

They are spreading manure on government buildings and blocking the highways with tractors.pic.twitter.com/hnUTu6kaGJ

And then, of course, there was Sri Lanka, where President Gotabaya Rajapaksa enacted an almost-overnight ban on on pesticides and all synthetic fertilizers with the object of drastically reducing emissions and juicing his nation's ESG investment score. Well, "mission accomplished!" on that final point at least, but what came with that victory was an absolute disaster for Sri Lanka, with the nation's currency on the verge of collapse, with inflation running at around 112 percent, and devastation for the rice and tea harvests, the backbone of the nation's economy (and the Sri Lankan diet). 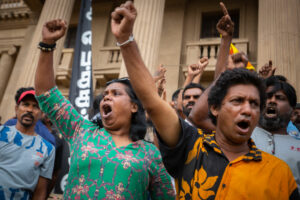 These are apparently the types of disorder that Justin Trudeau wants to import to Canada. Jordan Peterson made the same connection in his recent cri de coeur on the present state of his beloved homeland in the National Post:

How have Canadians failed to realize that our government holds them in contempt?... That the Trudeau Liberals are perfectly willing to make us all poor, miserable and demoralized just to utterly fail in their efforts to save the planet?... That we could be the freest, richest, cleanest country in the world but that we are trying hard to be none of those three?...

That all the data on the environmental front indicates that the fastest way to improve the ecosystems on which we all depend is to make people richer, not poorer (and to do that with good old capitalism) so they have the luxury to think about the long run and the habitat of their children?... Or that we are pursuing an energy policy generated by ideologues that will not only impoverish our populace by making energy unreasonably expensive... but that will only increase the probability that countries such as China will have to rely on coal to produce electricity instead of accessing, say, our plentiful natural gas. And that will therefore make the CO2 burden borne by the atmosphere greater instead of lesser.

And... (and in the aftermath of the Dutch farmer protests), that we are trying to reduce the absolute levels of the greenhouse gas nitrous oxide produced by those who grow our food regardless of the amount of those crops produced in consequence. And that we’re doing that by threat and force — shades of Covid policy — instead of working with the farmers to find mutually acceptable and truly sustainable economic and environmental solutions.

Read the whole thing. Even if chances are slim to none that Justin Trudeau will do the same.