Some very odd things are happening in the modern world of government and politics that don’t conform to democratic theory. I’m thinking, for instance, of the mass protests against anti-Covid regulations in cities across France, Germany, Austria, New Zealand, Italy, Australia, the United States, and in Canada without much attention from the international media; the brutally violent police tactics used against protesters in most of these cities, especially  farmers in Holland and car-owners (the Gilets Jaunes) in France, again with not much media coverage; the attempts by the Canadian government to crush the truckers’ parking protest in Ottawa by such extraordinary (and extra-legal) methods as seizing the bank accounts of people who wanted to help them financially; the violent overthrow of the Sri Lankan government because it had instituted agricultural policies banning the use of fertilizers on the advice of the World Economic Forum that led to crop failures and widespread hunger; and the signing of a memorandum of understanding on future cooperation between the United Nations and the aforementioned W.E.F. which is little more officially than a conference of corporate CEOs (though it boasts of planting its former interns in high government positions around the world).

In short, though I haven't weakened yet, I'm tempted to become a conspiracy theorist.

The mere existence of the W.E.F., an international conference of billionaires and CEOs who fly in annually to a remote Alpine resort to discuss how the world should be governed, to which prime ministers, presidents, and “opinion formers” are flattered to be invited, arouses my curiosity. It sounds (and acts) like a sinister conspiracy in a dystopian novel by writers as various as G.K. Chesterton, C.S. Lewis, and Aldous Huxley, or like Karl Marx’s “executive committee of the bourgeoisie.” Yet it is deeply respectable—it signs MoU’s with the U.N. for heavens sake!—and is seen as mildly and desirably progressive. Moreover, because it brings together “top people” from all enterprises and institutions, its policy prescriptions have an almost automatic credibility rooted in a general expectation that the W.E.F. network will get these things done. Next step: they’re inevitable!

But the sad (or cheering) fact is that almost all its “big projects”—the euro, open borders, anti-Covid lockdowns, vaccine mandates—have crashed upon launching. Its motto is “global problems require global solutions” but a better one would be “Ah well, back to the drawing board.”

Even so we shouldn’t exaggerate the independent power of the W.E.F. It exercises some power and more influence as the leading edge of the large overall institutional bureaucracy—including N.G.O.s, transnational bodies such as the European Union, multi-national corporations, and governments in whole or in part—that goes under the name of “global governance.” John Fonte, the Hudson Institute scholar, has revealed in detail how global governance really works: it proceeds issue by issue by making international treaties on everything from trade to transgenderism that commit the signatory governments to implement them in domestic law but that were negotiated secretively in a wilderness of committees in Brussels or New York and have never been the subjects of serious democratic debate. 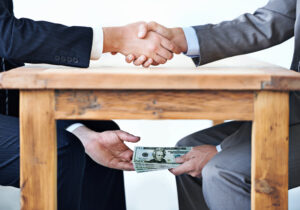 We then enjoy the spectacle of government ministers being unable to explain why they are passing laws which they personally dislike as well as fear that the electorate won’t stand for them. Such treaties empower the bureaucrats who negotiated them, the corporations that influenced their drafting, the N.G.O.s that go to court to compel governments to implement them, and the courts that will finally interpret them. They disempower the voters, their elected representatives, the government ministers who have to tailor their policies to fit the undemocratic straitjacket of the treaty. And they lead eventually to a clash between the voters and the global governance bureaucracy.

Under global governance the democratic process becomes a play in which the democrats speak lines written by non-accountable global governance bureaucrats. It ends in a series of clashes and crises like those cited above. And whether or not those who protest are indulged or crushed depends in part on whether their demos and lawsuits are aimed at obstructing the global governance agenda or advancing it. The Dutch farmers trying to save their land from Net-Zero environmental regulations enshrined in treaties get crushed; the Extinction Rebellion protesters using violence and property destruction to ensure the enforcement of such property seizures are joined by dancing policemen at jolly street parties.

Democracy in these circumstances becomes a façade for authoritarian rule by remote bureaucracies. Writing in Quadrant earlier this year, I argued that this had happened in response to Covid-19 in early 2020 when an international bureaucratic consensus drove governments to impose massive restrictions without proper debate:

Governments panicked, cast aside their earlier pandemic planning based on protecting vulnerable groups, and adopted approaches to suppress the virus by locking down the entire society. This was the wrong approach and maximized economic problems. Almost all the forecasts supporting this policy were exaggerated. Covid was a nasty illness that killed people: but its infection fatality rate was low: most of its victims were elderly people with pre-existing illnesses (people like me, in fact); and “excess” deaths were quite low.

These realities were concealed by not distinguishing between dying with and dying of Covid, by suppressing medical information that contradicted the orthodoxy, by censoring scientists who dissented from it, and by “nudging” people to accept lockdown policies at a subconscious level.

And now, of course, we know that the consensus—the bureaucratic orthodoxy—was a mistaken one. Sweden defied it and has had a better outcome on all measures—not only economic ones, but also in democratic accountability, public order, and civil rights. As I also pointed out in Quadrant, “ this bureaucratic groupthink also led to increasingly authoritarian behavior by the state:

The flame that torched the truckers’ protest in Canada was the mandate from the Canadian government that truckers must be vaccinated before driving their long and lonely way along the vast interstates of North America. 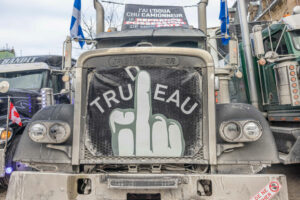 Standing back from partisan politics, we can see that a broadly similar political structure is emerging throughout the West. Conservatives and-or moderate liberals win elections sometimes, maybe most times, and therefore make occasional advances; the Progressive Left controls the unaccountable institutions of global governance along with cultural, legal, bureaucratic, and economic power almost all the time. So the Left is able to block most of the Right’s policies in government, but the Right has no similar restraints on the Left.

We see it most clearly in Britain where Boris Johnson’s government won a large parliamentary majority, but found that cultural institutions from the BBC to the British Museum to the National Trust are now “woke” institutions focusing on, for instance, an account of the slave trade that makes no mention of Britain’s abolition of it worldwide—and failed to find a way of altering that balance.

That explains why some governments in Europe, notably the Polish and Hungarian ones, want to strengthen the elected government in relation to the progressive institutions that can block it. The E.U. is the largest such obstacle in today’s Europe, and conservatives generally should want to see Brussels return some of its powers to national capitals. That’s especially important at the moment in relation to taxation which the Biden administration, the E.U., and now the G7 are attempting to harmonize in a way that will penalize low-tax and low-regulation countries. Those attempts violate the vital principle of jurisdictional competition. If they succeed, they would turn the E.U. into a cartel of governments colluding with each other to keep the price of government high.

We should oppose that in principle. If we fail, we will find ourselves both living under taxation without representation and financing inefficient and unresponsive global governance. And our only recourse will be to riot—by which time, of course, we will have lost the argument.