Not so long ago, we were all getting ready to freeze. In 1971, the Global Ecology network forecast the “continued rapid cooling of the earth; in 1975 The New York Times brooded that the earth “may be headed for another ice age,” as did Newsweek; in the March 1, 1975 issue of Science News, we were informed that “the approach of a full-blown 10,000-year ice age [was] a real possibility,” and in the July 1975 issue of National Wildlife, C.C. Wallen of the World Meteorological Organization warned that “the cooling since 1940 has been large enough and consistent enough that it will not soon be reversed.”

A few years later, we are all in danger of frying to a crisp. Over the past decades, as we know to our cost, a consensus has developed that the world is warming as a result of AGW (Anthropogenic Global Warming). There is, apparently, no room for doubt.

The trouble is that the “science” involved has been commandeered by an army of political pulpiteers whose underlying purposes are distressingly suspect. Some of the movement’s advocates, to put it bluntly, are more concerned with saving their careers than saving the planet; others are building new careers at the expense of public credulity, the perks and salaries being just too good to give up. I imagine that a great number of them are dealing from the bottom of the deck.

Thus William Gray, professor emeritus of the Atmosphere Department of Colorado State University, laments that “fellow scientists are not speaking out against something they know is wrong. But they also know that they’d never get any grants if they spoke out.” Consequently, they must insist that “the science is settled”—an unscientific statement if ever there was one.

Gray received unlikely support from culture-hero James Lovelock who, in his various books on the apotheosis of Gaia, had been an ardent proponent of the Global Warming conjecture. In a late interview, Lovelock more or less reversed course, claiming that the science is far from settled and that “our university and government scientists might fear an admission of a mistake would lead to a loss of funding.”

In adding his réclame to the debunking of climate conformity, Lovelock -- who's now 100 years old -- showed both honesty and courage, rare attributes for climate commentators. If so-called climate skeptics need nerves of steel to oppose the reigning ideology, it takes even more courage for a “Warmist” to buck the trend. Lovelock, who in The Revenge of Gaia prophesied the charring of the planet, now confides he had been “extrapolating too far.” Despite predictably hedging his bets and deferring catastrophe into the indefinite future, he avers that “we don’t know what the climate is doing” and disparages his previous work, as well as Al Gore’s An Inconvenient Truth and Tim Flannery’s The Weather Makers, as “alarmist.”

Financial Post journalist Peter Foster believes that progress toward a more sensible accord on climate may be occurring: “alarmist science, grand schemes of UN-coordinated global governance, carbon taxes, and government promoted ‘technologies of the future’—are crumbling.”

But is that really the case? Our professional elites seems not to be aware—or interested—as they continue to promote a failed ideology. National governments and ambitious politicians are still beating the climate drum, whether Justin Trudeau in Canada or Gavin Newsom in California, leading their people down the road to economic perdition.

Thankfully, authentic scientists, men of courage and integrity, have no intention of surrendering to the climate commissars of the day. Their persistence in disseminating truth may eventually pay off. Perhaps people may gradually become aware that the so-called greening of the earth is actually leading to the blackening of the earth. 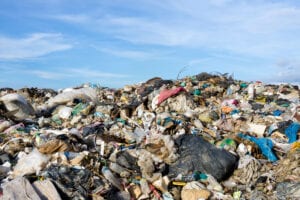 Where good intentions go to die.

The toxic waste flowing from Green renewables, unreported in the mainstream media, is off the charts. Writing in Forbes, Michael Shellenberger, author of Apocalypse Never: Why Environmental Alarmism Hurts Us All, cites reputable figures showing that by 2016 there were 250,000 metric tonnes of solar panel waste to deal with, producing carcinogens washed into the soil by rainwater.

The International Renewable Energy Agency (IRENA), he continues, “projected that this amount could reach 78 million metric tonnes by 2050.” In addition, costs are unsustainable. Today, “recycling costs more than the economic value of the materials recovered, which is why most solar panels end up in landfills.”

Additionally, burning e-waste materials, which include plastic components, produces fumes that are teratogenic. Wind farms create their own waste issues regarding the disposal of uncrushable, 100-to-300 feet long, used wind turbine blades, “a waste problem,” writes Christina Stella at NPR, “that runs counter to what the industry is held up to be.”

Perhaps people are also beginning to twig to the fact that, as P.F. Whalen writes in American Thinker, “the climate change cult’s agenda, is less about climate change and more about Socialism; maneuvering for the redistribution of wealth and increased government control over our lives, while disguised as well-intentioned activists striving for cleaner air.”

There’s nothing like the threat of an imminent apocalypse to advance a suspect agenda.

The scientific consensus today, as Foster believes, may be slowly shifting away from the catastrophism of the climate gurus, despite official and partisan resistance. True, the shift has been tentative. Carbon-driven global warming was an easy sell, but it will be a hard buyback—too many professional reputations are on the line.

Nonetheless, the evidence is growing to suggest, variously, that the human contribution to global warming is far less than originally assumed, that there may be no global warming, and that in any event a meteorological calamity is highly unlikely. As far back as 2008, two-thirds of the scientists attending the 33rd International Geological Congress were “hostile to, even dismissive of, the U.N.’s IPCC report” on catastrophic climate.

In addition, a coalition of 49 former NASA scientists and seven Apollo astronauts, including the deputy director of the space shuttle program, has accused the bureaucracy of both NASA and the Goddard Institute of Space Studies (GISS), with which NASA is affiliated, of diddling with the facts. They write: “We believe that [their] claims that man-made carbon dioxide is having a catastrophic impact on global climate change are not substantiated, especially when considering thousands of years of empirical data. With hundreds of well-known climate scientists and tens of thousands of other scientists publicly declaring their disbelief in the catastrophic forecasts, coming particularly from the GISS leadership, it is clear that the science is NOT settled.” 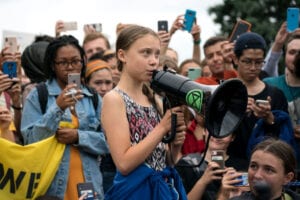 If Lovelock is right and we don’t know what the climate is doing, then it is surely time for a moratorium on oracular pronouncements foretelling climate doom and vaticinal prescriptions for drastic and irreversible action.

The sickly obsession with "green energy" has to be put out to pasture. It behooves us to proceed gingerly and with humility when engaging in practices that can alter and even destroy livelihoods, that can profoundly affect the industrial and economic infrastructures on which prosperity depends, and that may meddle harmfully with natural processes. Scientists are neither soothsayers nor sorcerer’s apprentices no matter how many degrees and laurels they have acquired.

Meanwhile, civilization is in no danger of collapsing—at least, not from natural causes; the earth is not about to become an orbital cinder; hydrocarbons are not about to be exhausted; and there is time to reflect, plan, experiment and test a diversity of sustainable energy replacements. Nuclear power plants, for example, are not only increasingly secure but create 300 times less toxic waste per unit of energy than do solar panels. Working in proportionate tandem with oil-and-gas, a safe, plentiful and affordable energy source can supply the energy needs of the future while preserving the environment as well as the job economy.

Precipitate action may benefit crony capitalists, corrupt politicians, academic imbeciles, Reset leftists and scientific sell-outs at the cost of planetary degradation and common suffering. The possibilities for creating fear and panic to further the schemes and purposes of Green profiteers are endless. “Some say the world will end in fire,/Some say in ice,” wrote Robert Frost. In the 1970s it was ice; now it’s fire.

A pandemic, a Biblical flood, erupting volcanoes, the separating of the African and Eurasian tectonic plates that may release the hell of Tartarus upon the planet, as James Rollins fantasizes in his Sigma Force thriller The Last Odyssey—all are equally plausible, which is to say, implausible scenarios. Perhaps it’s time to stop fetishizing cataclysmic theatrics, whether for lucre, reputation or political control. Moreover, the untutored enthusiasms of credulous multitudes need to be treated with unqualified skepticism as well.

In short, informed and honorable people know it’s time to take a breather on climate politics. Too little is known and computer models are notoriously unreliable, often reflecting their programmers’ biases or ineptness rather than the real world. This practice of presuming on results is called by those in the field “climate model tuning” or “parameter estimation targeting a chosen set of observations.”

According to the American Meteorological Society, “tuning methodologies may affect fundamental results of climate models, such as climate sensitivity.” There are, as the AMS goes on to admit, “consistency issues across the model and its components,” as well as “limitations of process studies metrics,” such as sampling issues, and also the fact that “the climate system itself is not observed with sufficient fidelity to fully constrain models.” The language is technical but the meaning in layman’s terms is clear: the results of current climate and environmentalism studies, given the “arcane aspect of model construction,” are untrustworthy and corrupted.

What is needed is not ad hoc adjustments to confirm a theory or ratify an antecedent conclusion, but, as the AMS advises, “a vigorous debate on model tuning and evaluation.” There is far too much uncertainty arising from the inductive procedures currently in play.

Michael Crichton was right when he urged in State of Fear that we need “more people working in the field, in the actual environment, and fewer people behind computer screens.” No matter how sophisticated the regressive correlations and projective parameters used in computer simulations may be, there can be no substitute for concrete empirical work. Ultimately, we should agree, at the very least, that a large amount of comprehensive research still needs to be done before the science is sufficiently stabilized to yield results that are not perennially contestable.

The old Latin maxim applies: In dubio non agitur: when in doubt, don’t act. Or at any rate, act circumspectly and with gradually accumulated knowledge rather than with the doctorings of desire, the existence of prior convictions, or a raft of maniacal assumptions.