I recently received a note from a friend commenting on a syndrome he calls “Covid retardation,” which manifests literally as “a general across-the-board slowdown in everything—not merely cognitive, but walking slowly, shoulders slumped, looking at the ground, refusing to make eye contact with people, driving slowly (well under the speed limit) or reacting slowly at green lights, as if the person truly has nowhere to go and nothing to do.” The malady entails “dull conversation and lazy thinking, repetition of clichés and government/media-repeated falsehoods, and on and on. People have a choice. They're not yet in camps. They choose to behave that way.”

I know precisely what he’s getting at and have remarked on this distemper many times. I was observing the stance and posture of a procession of masked ghouls again from my balcony this morning. It's scary as hell and reminds me of The Invasion of the Body Snatchers.

Younger people for the most part still enjoy a fund of natal vitality that keeps them reasonably vertical, but middle-aged to older people tend to succumb more readily to a visibly manifest despair. They mumble almost inaudibly through their masks and visors at shop counters or when they stop to chat. They shuffle and stoop, bend their heads and spines as they walk, as if slouching toward the end times. The scapular droop is palpable Bodily comportment is a pretty good sign of general depression and intellectual surrender. This is another consequence of the draconian and utterly misconceived response to the virus, almost never remarked but starkly evident.

Contributing to an atmosphere that does not encourage active coping or even simple curiosity, these people have been gradually but systematically deprived of agency. One wonders if they have not been “cancelled” in their essence. The data about the absurdity and harmfulness of the mask-and-lockdown mandates were always there to be found, even if the Internet is awash with partisan disclaimers and meretricious “fact-checkers”, even if Forbes, in an article plentifully larded with misinformation and false assumptions, has instructed us not to do our own research.

Moreover, the thoughtless rush to vaccines, which are not “vaccines” as we understand them but experimental mRNA strands injected into and systematically altering a person’s genetic code, may severely exacerbate the degree of catalepsy we are seeing. (Interestingly, Italy is presently launching a criminal manslaughter investigation against the BioPharmaceutical Company AstraZeneca, which uses a replicating vector-based vaccine as a delivery system that inserts genetic material into the cells’ nuclei.)

Of course, the slowdown we are witnessing is not only local or age-specific, so to speak, but cultural and national in its sweep. The economy has slowed to the point of near-irrecoverable stagnation. Entrepreneurial activity is sluggish. Small businesses are being decimated. The productive classes are almost paralyzed. Schools are closed. Elderly people are dying in nursing homes and senior residences. Prospects for the future seem positively narcoleptic. “Can do” no longer applies. A general sense of hopelessness has begun to pervade every aspect of common life, every major enterprise and plan for investment in long-term projects. 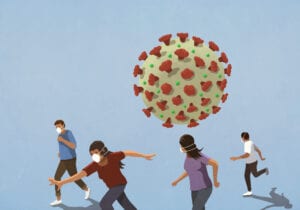 Run for your lives!

One sees the signs of demoralization and lethargy everywhere in the little things: the way people avoid each other and isolate in their portable “bubbles”; the way people murmur and mutter behind their face swaddlings; the way some people drive, fully masked, breathing in their own drowsy-making CO2, idling at stoplights, executing unpredictable maneuvers, and oblivious of traffic merges—as I can ruefully attest; and, most emphatically, in the way people walk, especially though not exclusively among the older population, tilting downward, phlegmatic and heavy, like sagging bladders of terminal despondency. This is terrifying to see.

True, there are places that are coming to or have come to their senses. Even The New York Times admits that Florida, for example, an open state with many seniors, outperforms most other regions and jurisdictions in the anti-COVID sweepstakes. Nonetheless, judging from my observations and the reports I receive from other parts of the country, the general impression of something like perithanatic anomie, a kind of corporeal melancholy afflicting a large segment of the population, appears to be valid.

Where is responsibility to be assigned? The arrogance, stupidity and coercive power of the political class on the whole and of the so-called medical “experts” who conform to and abet their masters’ agendas cannot be forgiven. They have been wrong across the board and, along with their Big Tech and media collaborators, have caused vastly more harm than they have prevented, crippling economic and social life as well as generating an “excess” mortality count that is staggering.

A JAMA (Journal of the American Medical Association) study covering the period from March 1 to May 30, 2020 in the U.S. reveals that “the number of excess all-cause deaths was 28% higher than the official tally of COVID-19–reported deaths during that period,” owing to delayed medical care, economic hardship, substance abuse, emotional distress and “suicides of despair.” In my own country, Statistics Canada has belatedly concluded that “the number of excess deaths has been higher than the number of deaths due to COVID-19, and these deaths are affecting younger populations.” 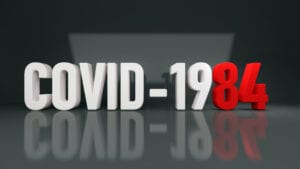 With a Great Reset on its way soon.

In fairness, however, it should be acknowledged that the majority of people, young as well as older, have accepted the diktats of government officials and their public CMOHs (chief medical officers of health) as oracles, without questioning the information they dispense or consulting independent, non-governmental-aligned epidemiological authorities, such as The Great Barrington Declaration, the American Institute for Economic Research, JAMA and many others. Public obeisance is at the root of the travesty of voluntary disempowerment, the effects of which are now on popular display. “Those who know the least obey the best,” wrote George Farquhar in The Inconstant.

I have seen the identical syndrome my friend mentions at work in the members of my own family, who implicitly believe everything the lying media tell them about masks, lockdowns and vaccines, and treat my warnings as merely conspiratorial. The respect they have, amounting almost to adulation, for health bureaucrats and medical hired guns, who may not “know anything” and who have occasionally violated their own proscriptions, is quite discouraging. My relatives refuse to look up anything for themselves or credit the clear evidence when it is presented to them. The mental disposition of those I care for reproduces the physical deportment they increasingly exhibit, the signs of a profound distress which they cannot disguise. And it seems, despite my best efforts, there is nothing I can do about it.

All one can manage at this point is to bear witness and stay upright. Observing these legions of abulics shambling by, tentatively fumbling with their masks and looking wilted, I find this posture of desuetude truly appalling and ask myself, to adapt a phrase from Henrik Ibsen, whether the dead will ever awaken. For it is an exhaustion of spirit, a reduction of vital energy, a lasting expression of defeat and a morbid depletion of the will that may be among the greatest and most gratuitous harms the Covid panic has produced.