It seems like just yesterday then-President Obama put Joe Biden in charge of that “three-letter word: J.O.B.S.,” and while he failed in that mission, as president he’s back at it, this time with incoherent strategies and massive graft opportunities for all his Democrat constituencies.

The proposed $2 trillion giveaway, dubbed the American Jobs Plan, only thinly disguises the graft-enabling nature of the proposal. And the means to pay for this giveaway -- higher taxes on persons, investments and businesses -- are more likely to destroy the economy, most particularly regarding small businesses, long the generator of jobs in this country, than the expenditures proposed for actual infrastructure are to increase job opportunities and prime the economy already reeling from the Covid lockdowns.

But let me begin with the most ludicrous of Biden’s ideas, supersonic jets and a national high speed railroad, something not specified in the Plan, but Buck Rogers-ish notions he keeps talking about nevertheless, perhaps under the misguided notion that these are in the Plan. Perhaps even to deflect from what is in it.

Biden claims, “If we decide to do it, be able to traverse the world in an hour, travel at 21,000 miles an hours.” Earth’s circumference is slightly short of 25,000 miles. To circumnavigate it these imaginary planes would have to fly 25,000 miles per hour, coincidentally the escape velocity of the earth. The last supersonic jets were the Concorde fleet which took 3 1/2 hours to fly from New York to Paris to London, so noisy and at an operating cost so high that these factors  caused its demise in little over two decades.

Of course, it would be interesting to see how supersonic jets could, in any event, function without Biden’s hated fossil fuels. Maybe some sharp engineers can rig up solar panels and windmills on them without jeopardizing reliability or reducing air speed. 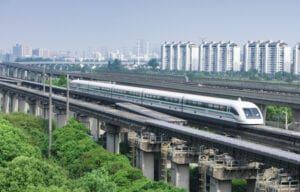 All aboard the Shanghai maglev express!

Equally unrealistic is his advocacy for a cross-continental high speed railway, something once bandied about, then scrapped for decades. To my knowledge, the fastest trains operating today still move at less than conventional air speed: “ Shanghai Maglev has the highest run speed of 431 kph for an operational train covering a 30.5 km distance in 7 mins 20 secs.” Japan’s L0 Series Maglev due to be operational in 2027 will travel at 310 miles per hour, slightly less than half the speed (about 570 mph)of a Boeing 747.

It’s almost 3,000 miles from New York City to Los Angeles. To be of any value, any cross-national high-speed train will have to connect major urban areas, and the difficulty of obtaining the right of ways through already well-developed tracts in a country with so many litigation opportunities available to opponents seems as difficult as getting high-speed trains operating on such varied topography and wind speeds as a national railway would encounter.

Even without the delays and legal costs to obtain rights of way, the last estimate I saw for construction of high-speed rails was $60 million per mile. The Chinese have fewer property rights they can defend in court, and Shanghai’s 30 km Maglev line cost 1.2 billion to build. This, of course, doesn’t cover recurring capital costs --Shanghai’s train is losing about $33 million per year on those. Given the way Amtrak is run (it manages to lose money even on $9.50 cheeseburgers, we can expect to lose far more on our national railroad.

But the final kicker, it seems to me, is that like the push for all-electric vehicles, Maglev high speed trains require a great deal of electricity (between 1 and 3 kilowatts per ton ), but nothing in any of the administration’s grand plans includes increasing electric-power generation. If it did, fossil fuels would still be needed to create the electricity unless the administration has some super-secret plan to create much more nuclear energy generation. Do you see that on the horizon? I don’t. And there's not a whisper of it.

Just as fantastical as Biden’s wish list for things not in the Plan, are the items in it. This is how the Democrats who like this infrastructure bonanza define “infrastructure":

Translation: It’s everything they want to use tax revenues to pay for. Like Lewis Carroll’s Humpty Dumpty, the Democrats seem to think ,”when I choose a word, it means just what I choose it to mean.”

In the real world, however, infrastructure is defined by the Oxford Dictionary as “the basic physical and organizational structures and facilities (e.g. buildings, roads, power supplies) needed for the operation of a society or enterprise.”

In real infrastructure terms only 5 percent of the  $2.7 trillion  would go for roads and bridges. More than half the plan is designed to eliminate fossil fuels. $213 billion would go to build and retrofit energy-efficient homes and buildings. Elsewhere, retrofit investment costs came to almost twice the actual energy savings with an average return of minus-7.8% annually. The plan calls for $85 billion for regional mass transit, just as mass transit ridership is collapsing because Covid-19 has warned people of the dangers of it.

Of course there is no mention of continuing high capital costs, safety concerns and the demonstrably poor management of such systems. In Washington, D.C., we had a multi-billion dollar federally financed mass transit system which has been so poorly managed it has become unreliable and dangerous to passengers. People in ever larger numbers are refusing to ride it. To lure riders back, the management is now offering lower fares, further increasing the operating deficits which were already high. It’s estimated that by 2025 the revenue shortfall over expenses for this single system is expected to be some $2 billion. Taxpayers, of course, will be making up the difference.

Moral: you can build these things at great expense but you can’t make us ride them. And you can’t ignore the fiscally painful experience that huge continuing capital outlays will be needed to keep them afloat. 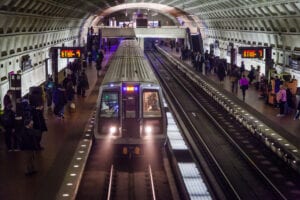 The D.C. Metro: if only it worked like it looks.

As the Administration works to banish fossil fuels, which presently make up more than half of American electric generation, Biden works to boost the wind and solar industries and is making the power grid less reliable in the process. His idea of providing tax credits for battery storage and high-voltage transmission lines to places now reliant on fossil fuels, is equally unrealistic.

I've already discussed here the plans to pay states, cities and schools to buy electric vehicles and build 500,000 charging stations, and how ludicrous this is without a plan to increase electric generation. Biden plans to shell out $178 billion in grants to create these charging stations along the 50,000 miles of interstate highways and thousands of other major highways. How to decide who gets those grants and where the charging stations will be built? If you live in a Democrat-run city you can figure this out. If not, ask a savvy friend who lives in one.

Less remarked upon are the tranches of cash for things no one would actually consider infrastructure:   building and upgrading schools and child-care facilities and extending broadband service to all Americans.

The plan to spend $100 billion on K-12 facilities includes $50 billion in direct grants for facilities and $50 billion in construction bonds. Another $45 billion in Environmental Protection Agency funds would be used to reduce lead exposure in schools and early-childhood facilities. In addition to expanding broadband, Biden’s plan would seek to lower the cost of internet service.

Also not well-publicized is the plan to kill the suburbs, a refuge for middle class Americans from crime, bad schools and high taxes -- this would be done not only by making transportation by cars more expensive, but also by “diversifying” neighborhoods through forced changes to local zoning laws that would end single-family-home neighborhoods. Placing low-income, multiple-unit rental housing in single-family suburbs, something that overturns the long established right of municipalities to create their own zoning preferences, will likely face a mountain of legal challenges. 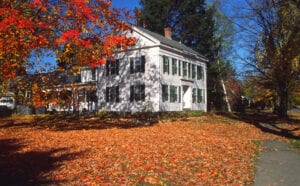 The Plan, is manifestly unrealistic and expensive. Will it create the 19 million new jobs the administration claims? No way. Moody’s chief economist estimates that the plan will net only 2.7 million new jobs, 600 percent smaller than Biden's claim. To however many jobs are created by building charging stations and upgrading nursery schools to be more energy efficient, subtract the large number of jobs lost in the fossil fuel and carbon-intensive industries.

But they even have a plan for that: some $40 billion is to be allocated for a "dislocated workers" program and $10 billion for a Civilian Climate Corps. How wonderful will it be for oil rig workers and coal miners to learn to code from Democratic functionaries or to have your homes and schools retrofitted by people who've never done this work before and are unlikely to have the skills to do it properly?

In sum, the plan is built on fantastical notions respecting transportation choices, is littered with graft opportunities and means to pay off supporters without doing much to improve actual infrastructure, transportation, energy use or that “three-letter word, J.O.B.S." -- which in Biden's mouth now really does seem like a four-letter word.

The Democrats are attempting to ram through an expensive, job killing, neighborhood destroying, pelf-increasing, waste of money. In Congress, they have the slimmest of majorities. At the moment they hold the House by only six votes (218-212) and the Senate is 50-50. One can only hope the Republicans will stand firm and that enough Democrats will see that their political survival depends on their joining the opposition to kill this monstrosity.