In George Bernard Shaw’s Play, Misalliance, a young socialist bursts into a upper-class weekend party  waving a gun, and after a good deal of Shavian talk he’s persuaded to postpone revolution for a square meal in the kitchen by the kindly matriarch of the household. Before he is diverted, however, he challenges a retired colonial governor to say how he would deal with the New Socialist Man of the future, like himself, who rejects all the conventional rules of the political game. The governor explains matter-of-factly that he would tip off an ambitious policeman that he was a bit of a troublemaker who should be watched and then wait patiently for the policeman to provoke him into a fight and an arrest.

“Why, that’s disgraceful,” responds the anarchist indignantly. The governor replies that in the game of anarchism the police can always beat the anarchist.

Almost invariably, that is true. Revolutions are the exception, and even they conform to the governor’s cynical insight when they succeed, because the police reappear soon after the new order is established, are given greater powers by the new post-anarchist authorities, and arrest the few remaining anarchists. See the history of the early Soviet Union passim.

What we’re at present witnessing is the spread of anarchism in the United States and, less violently so far, in the United Kingdom: mobs rushing around, pulling down statues, attacking people they believe to be “racists” (maybe because they’re wearing a baseball cap), demanding conformity to their  revolutionary slogans, and visibly flouting the authority of governments and local authority. The pulling down of statues—historically known as iconoclasm—is a traditional accompaniment to religious or political revolution that symbolizes the defenestration of one set of rulers and their replacement by a new set.

The role of the police in these events is especially significant. As the guardians of order, supposedly politically impartial, they are expected to restrain and suppress riots and destruction of lives and property. Against these disorders they seem pulled in three different directions Those in Seattle have been instructed by local authorities that are politically sympathetic to the rioters to allow them to establish “no-go” areas outside the law; those in Atlanta may be resigning or simply looking the other way when crimes are committed because they feel the local authorities are making them scapegoats for incidents of law enforcement that went wrong; and those in London seem to have decided on their own initiatives that policing by consent means the consent of the rioters and have accordingly tried to appease them. In all these cases the citizens can no longer rely with confidence on the normal assumption that the police will protect them and their property. Anarchy reigns.

At some point if the anarchy does not lead to an actual revolution, it will either fizzle out or be stopped by police or military force. The 1968 manifestations in Paris were stopped when the Army made it plain it would intervene if necessary, the bourgeois supporters of de Gaulle mounted their own massive manifestations in Paris, and the Gaullists won a landslide in the subsequent elections.

But the spirit of anarchy cannot be confined in a box marked public order. It seeps out into all aspects of our lives—I’ve mentioned iconoclasm as its symbolic representation in the arts. Jihadists have destroyed “pagan idols,” i.e., Buddhist images, in Asia. Feminists in recent years have been imitating the Victorians in putting bras on Greek statues and stockings on piano legs in official settings. And the removal of statues of national heroes such as George Washington, as well as leading abolitionists, on the grounds of “slavery,” shows that the real motive force of this particular anarchistic drive is to replace the United States, founded circa 1776, with a new American state.

More important than iconoclasm, however, is antinomianism which is the rejection of all laws, customs, and informal rules in all fields of human behaviour including, significantly, science, law, and morality. Their removal gives the anarchist a thrill of liberation when first antinomianism breaks forth. But since it’s in the nature of man that, as Burke said, he must have rules to govern him, and if they don’t come from within in the form of customs and practices, they will come from without in the form of politically-imposed new “truths” on the arts and sciences. 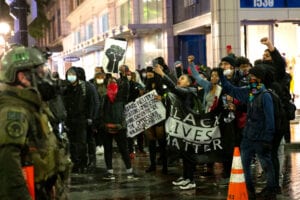 It’s a two-stage process: first, we liberate ourselves from the old laws that confine our imaginations to what science and experience tell us is true and practicable; second, we replace them with rules that reflect the wishes and interests of the powerful—who are not always politicians and ministers but sometimes in periods of decaying political authority, the mob or its allies. The political mob made its first appearance in Paris during the French revolution, but it has come and gone many times since then, and it’s presently most powerful in Seattle and Portland.

Taken together these two stages produce the replacement of professional rules and ethics by political values and authority in all fields. It can be a slow process, especially in science, and it begins modestly, but the final stages often have seasoned professionals accepting new rules they would once have denounced or regarded as simply too absurd to bother denouncing. The old professional rules of American journalism that you followed the truth where it led by examining fairly the claims of all sides in a dispute have collapsed entirely—and that collapse began long before Donald Trump was elected President. It has reached its apogee in the recent decision of the New York Times to publish the deceptive and false 1619 Project not as one account of many historical accounts of the birth of America but as the sole acceptable truth (though it comes to us less from history than from critical race theory which is constructed so as to negate any criticism of its own criteria.) Its principal author has just welcomed the spreading anarchy as a vindication of the Times project, which is now to be taught in American high schools.

Examine now this sinister drift from the rules of scientific truth to the imperatives of political anti-science which we might call the Lysenko Imperative, or “What the Party says is Science is Science”:

Mr. Ramos reflects that given these trends it seems only a matter of time before Science and Nature get on board with that idea. It sounds alarmist but absurd. Yet we would once have thought the same of the "1619 Project" and the New York Times. And that's before the arrival of, first, the mob, and then the new policeman.