For the past decade or so, populism has been the key to understanding many of the big happenings in world politics. Since the disastrously managed wars in Iraq and Afghanistan and the 2008 financial crisis provoked the ur-populist movement, the Tea Party, anti-elitist politics has made waves around the world from Brexit and the election of Donald Trump in the Anglophere, to the Gilets Jaunes and Manif pour tous movements in France, and the rise of populist nationalist parties and governments in former Eastern bloc nations like Poland and Hungary.

One country which has seemed to have no significant dalliance with this phenomenon, however, has been Canada. It has become almost a truism in the world of political commentary that the Great White North is immune to populism. Why might this be? The generally accepted explanation was given voice by Justin Trudeau back in 2015 -- Canada, he said, is the world’s first “post-national state,” a nation with “no core identity." It is, in his estimation, essentially an administrative unit rather than a conglomeration of people with a history and a common self-understanding, and consequently populism has no way to get a toe-hold there. You can't have populism without a people!

This outlook has informed Trudeau's seven years in power. He has worked hard at portraying a prime minister on T.V. rather than serve as one in reality. He has outdone the leaders of every other nation in his embrace of what Irish political commentator Conor Fitzgerald (discussing his own countrymen) has referred to as "goodboyism," the desperate desire to be patted on the head by the international political community. Do whatever you can, say whatever you need to, to get a nice write-up in the New York Times or get someone to notice you at the United Nations. That's what it means to be the prime minister of a post-national state. 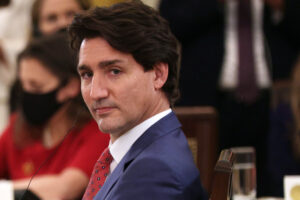 Not a real prime minister, either.

To that end, Trudeau has worked overtime -- at the expense of Canadians and Canadian businesses -- to become a darling of the international environmentalist movement. More recently he has gone all in on Covid-19 restrictions and vaccine mandates, referring to vaccine hesitant Canadians as “extremists," "misogynists," and "racists,” adding "Do we tolerate these people?” This is a common trope with him, by the way -- everyone who disagrees with his policies must be "othered," to use language the Left tends to love in other contexts. They are always “extremists," "misogynists," and "racists."

Meanwhile, Canadians have grown increasingly restive. Polling indicates widespread support for strict Covid measures, but when you talk to actual Canadians -- not activists, but regular people, they're fed-up. Their cost of living has gone up -- something Canadians tend to be keenly aware of. Some of them have seen their businesses shut down or were laid off in 2020 and haven't been able to find work since. Their kids have been wearing masks to school for almost two years now, with no end in sight. School boards periodically decide to shut down for a few weeks at a time with little-to-no warning.

And Canada's governing and media classes -- Right as well as Left -- smugly respond to this discontent by pointing to abstract economic indicators suggesting that the country is doing fine, and tossing in for good measure "at least our case numbers are lower than America's!" Meanwhile even U.S. states with strict Covid regulations are generally looser than provinces like Ontario and Quebec, and Canadians who have been able to resume their annual trips to Florida this winter say it feels so normal they can't believe it, that it's like something out of a dream. 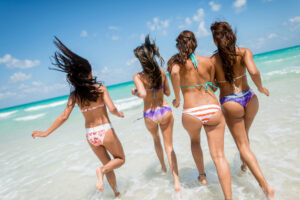 No wonder Canadians are heading to the free state of Florida.

Well the breaking point, at least for a lot of Canadians, seems to have arrived. The occasion is a new mandate for cross-border truck drivers that went into effect on the 15th of January and which requires unvaccinated truckers to quarantine for 14 days whenever they cross the border, effectively making it impossible for them to operate. The number of truckers affected is comparatively small -- estimates are between 10 and 15 percent of drivers. But with supply chains already under stress from Covid lockdowns and other related economic factors, 10 percent of truck drivers out of commission has the potential to be disastrous for Canada, not to mention for the individual truckers who are unable to work.

Moreover, the mandates are entirely punitive -- no one is even arguing that truckers pose a significant risk for spreading Covid and quarantining them won't slow the spread appreciably. Finally, even if it does "slow the spread" of a virus that's been circling Planet Earth for the past two years and more... so what?

To broadcast their annoyance a group of truckers have organized a cross-country convoy, from Vancouver to Ottawa, the nation's capital. Along the way thousands of truckers, and other frustrated Canadians, have joined them, more than they could have imagined -- current estimates suggest that the convoy is 70 kilometers long and includes something like 50,000 trucks. Thousands more have taken to waving flags and holding up signs on overpasses saying "Thank You, Truckers!," "God Keep Our Land Glorious and Free," and other patriotic slogans you wouldn't expect in a post-national nation.

Justin Trudeau was asked about the convoy this week and he responded predictably: "The small fringe minority of people who are on their way to Ottawa, who are holding unacceptable views that they are expressing, do not represent the views of Canadians." I'm surprised he refrained from calling them racist misogynists. Of course, as the number of participants swelled, Trudeau apparently became concerned that he might be forced to address their concerns when they finally make it to Ottawa, so he announced that he had been exposed to -- not even tested positive for! -- Covid-19, and so he will be isolating for the sake of, well, his political career.

But still the convoy rolls on. Will it effect any significant change, or will it fizzle out? That's impossible to say at the moment. But it feels like a significant moment for Canada, when regular people who have long been ill-served by their political leaders (of all parties it should be noted -- Erin O'Toole, Jason Kenney, and Doug Ford have been just as terrible on Covid as Justin Trudeau) dug in their heels and announced that they're not gonna take it anymore.

Maybe enough people show up to show the Prime Minister what a small "fringe minority" with “no core identity" actually looks like. But don't take it from me, take it from Howard Beale: