I’m not really sure who Hermés is marketing to if not me. I mean not only do I buy a fair amount of new things, I’m forever bringing new life to Judith's (mummy’s) vintage pieces. Honestly, they should fête me. But instead, what I get is attitude. And with all this Covid madness I’m needing more scarves as masks, not less. And dry cleaning is taking seven times longer than it has my whole life.

Ok, maybe I can’t remember back as far as my whole life but I think you get the picture. Their website was extremely limited…nearly everything was either a jungle theme, or Maori, or African, or the Amazon, or Inuit or some civilisation that clearly doesn’t shop on Bond Street. And everything blue??? Ugh! So I popped into Harrod’s because—leave it to the shop that started by selling us tea to still know what we want today.

And I was right, everything was so much more suited to what anyone would wear but with the addition of so many stupid small sizes, I had to keep asking --is this one the real scarf size or the Barbie size? And then I had a flashback to the snipey clerk in the states who had admonished me by saying that a $2,000 Collier bracelet was “only fashion jewellery,” and I shouldn’t take so much time deciding. Clearly Hermés clerks are rather well compensated.  But no chance I’d have a similar problem here, the experience of shopping at Harrods is really... an experience.  And for a moment I didn’t miss my life in Los Angeles at all. 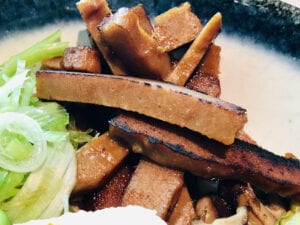 Soon however, I was starting to go mad by so many patterns and colours and I needed a cup of tea to set me right so I popped out, promising to return. And I meant to—really I did, but two glasses of bubbly later I still couldn’t understand why, with four dozen instruction books over the years on how to tie any scarf —we needed smaller sizes. Oh how I wished Judith were here. She’d have picked out the best of the lot and we’d be eating yummy roast beef…or  222 Vegan if I had the patience to re-explain seitan strips and cashew cream.

I pulled out my phone and googled silk’s impact on the environment… so much fresh water used…energy for air-conditioning and humidity control of the farms, hot air to dry the cocoons and, maybe even coal-fuelled factories. None of this had been depicted in any size. Maybe it was environmental responsibility that accounted for the loss of silken inches? One more search led me to Ferragamo, who was making a silk-like fibre from oranges—not even orange wood, but used oranges! This I had to see. A few paragraphs later l learned it was actually citrus by-products, so my leftover breakfast squeeze could have avoided the compost and made its way to a fabulous scarf! 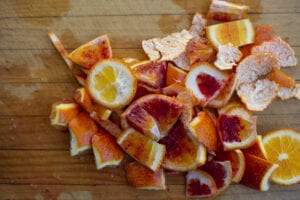 Amazing what they can do with fruit these days.

I doubled back over to Bond Street, this time to Ferragamo. The whole store smelled like a delicious new leather snaffle bridle, but it was citrus I was after. Pretty much no one in the store knew what I was talking about until I thrust my phone forward showing them the WWD piece detailing “the contemporary way to construct an ethical lifestyle”, that “everything was possible with the fashion world now having joined the sustainability train”, and the “commitment to bringing sustainable practices to the fashion industry set the example for waste reduction and organic repurposing”. Surely all this hadn’t been lost on them, but apparently their commitment had ended—with one collection.

I bought the pink peony scarf and a viva slingback in bone. It was getting late and I didn’t feel like carrying too many packages so I made my way back to St John’s Wood just in time to find daddy and Judith setting up for cocktails. I had been craving an orange for some reason and settled for a Tesco orange juice with bits.

I had wanted to complain to them about my day—to tell them that Hermés had gone all indigenous on me, that the five different sizes were dizzying, and that silk itself was… hmm, better forget the sad-planet bit as I’d bought one anyway. And now that I thought about it—champagne, Harrod's, Bond Street and a large expenditure on accessories didn’t seem likely to engender much sympathy, nor would including the misleading WWD article.

“Remind me where it is that you live in California?” Father asked. He knew very well where I lived, but I decided best not to huff.

“Sherman Oaks… nearly Beverly Hills as you may recall”, I said.

“Yes, of course. Sherman Oaks, I had just been reading about fire season out there”.

“Fire… SEASON??” I asked, knowing I wasn’t up for the banter.

“Never mind that”, he said, “I was really just referring to black-out season, which seemingly always coincides with fire season”. He was gaining, just as Judith asked to see what I’d bought.

“I don’t know that it’s fair to say… always coincides", I ventured, knowing I’d landed a blow, he was forever preaching the ills of superlatives.

“Well in this case, I would say it is indeed fair, millions of acres of land burning, millions of homes without power… and both sharing the same catalyst, we can’t argue they aren’t related”, he went on.

Ah, how little he knew his own daughter. Certainly I could argue, but not when I was crashing from the sugar of the orange juice. Or the big lunch. Or both. And I knew he was correct. Failure to harvest dead trees had provided the fuel for the fires, and the money spent fighting fires was now not available to tuck the power lines underground, so yes, he was right, and yes he would make me admit this was another failed green policy so I just smiled and said:

“We can all agree the larger season is summer, yes?”

“Indeed” was his only reply.

Indeed. It was almost a victory lap.

They were heading out for a curry and invited me but I said I’d catch up on my emails and anyway the roast beef was a generous portion. 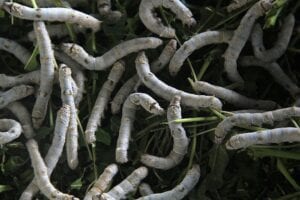 They neither toil  but they sure do spin.

I headed up to my childhood room and flopped on the bed with my laptop. Another web search brought up silk’s praises… its byproducts are integrated back into the local ecosystem, the mulberry fruits are eaten, the wood is used for timber and fuel, the foliage fed to cattle, the extra waste used as fertiliser; and Sericin—recovered from wastewater could be added to food, textiles, and pharmaceuticals.

Net-net, silk is virtually a zero-waste textile. I’d have to go back to hating cotton. And cheeky clerks.