Happy Easter from the Bahamas where I’m still working very hard. Not everyone who left the pandemic to take advantage of the Bahamas pro-business work environment is really all that focused on work—but I certainly am. I’ve made the determination about others based on the fact that they are having breakfast at 11—about the time I’m finishing up.

Thanks to Instagram I’ve found out I have several more friends visiting here than I’d ever dreamed possible, and they are mad-posting and hashtagging.  All day long it’s ding-ding—#lyford #albanyyacht #catcayyacht #eleuthra… ding, #pandemic ding-ding.

In the interest of work, (and despite looking so tanned and rested), I’ve decided not to post until I have at least three new clients. Or maybe one really juicy new client.  My focus, since I now have time to focus, is going to be to search out only the clients whose sensibilities are most closely aligned with mine. 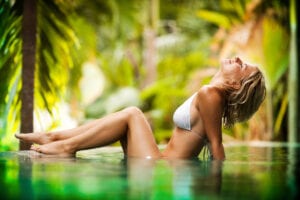 All work and no play, that's productivity.

Daddy said if I made self-sufficiency my priority I’d find I’m aligned with a great many but I know he’s just being daddy. It’s easy for him to say… I think engineering focuses one’s thinking in such a way that you are really too science-minded to think about meaningful change.

Earlier in the week I had a little hiccup… with such an influx of visitors and corresponding drain on the internet, I wasn’t getting my emails. Especially in the late afternoons when kids who should be swimming or in school are mad-gaming. The internet provider suggested I opt-out of using Wi-Fi and hard-wire my computer to the router— and which is so like a service provider to just make up some excuse as to why you can’t have what you clearly understood you were paying for. Plus it defeats the whole purpose of coming here to work. Luckily the yacht clubs are selling international hotspots so I can now work from wherever is most conducive to my productivity.

I had received a query from a global environmental movement that had “nearly” one hundred academics enrolled in fighting global warming. My first thought was how near to one hundred are you? Near enough to just recruit a couple more to make it an even hundred?  Which would have been my suggestion to them once we started working together. Further details explained that they “hoped” to rally worldwide support. Again…can you really not assert (with confidence) something so vague as “worldwide support”? They were going to need every bit of help they could get.

I was however impressed with their aim to using “nonviolent civil disobedience” to achieve their goals. But on second thought, the word “aim” scared me. And after some research it seemed aim was indeed the right word, as they’d blockaded five bridges in London as a protest. Technically this qualified as non-violent but it had the makings of a wholly man-made disaster.

Just now I was missing my rather bad-tempered client who’d made a killing in the cosmetic device industry, and whose presentation for the Audubon Society I’d painstakingly crafted just prior to being sacked.

Nonviolence was definitely the way to go, but try telling that to Greenpeace who’d made a name by insinuating themselves between a Russian whaler and a whale just in time to witness and film the gruesome death of said whale and sell the footage to the news media. In years to come Greenpeace would continue to sell their goodness until they became a $336 million a year multinational behemoth. Some questioned the integrity of these donations when China’s abysmal environmental record dropped off of Greenpeace’s radar.

As an avid environmentalist I have to care that we don’t look or act crazy, and in this way we can achieve greater results not to mention greater trust from the public. In the end what saved the whales from extinction was greed. With ever increasing demand for whale oil, man looked for alternatives and soon after creating petroleum, production from one petroleum well outpaced what a whaling expedition could garner in four years. This is of course all stuff I learned as a kid, but now as an adult I continue fighting both the evil destroyers of our planet and the movements that delegitimise those of us who are doing truly good work.

I was feeling rather down that this briefly promising client had evaporated as quickly as they’d arrived so I rang my father in London to see if he had any ideas. He nudged me again toward the grub worm food factory he had suggested last week but even he knew I wasn’t having it.  And then he dropped the bomb saying,

“Some of your friends had a good go of it on Thursday.”

“My friends?” I asked, not knowing what he was referring to.

“Spraying fake oil on the Bank of England to win friends and influence enemies,” he said.

Ah, environment nutters, he meant. “Friends” was his loving jibe.

“Pond scum if you must know. Pond scum and guar gum is what they used. Pity none of the news media seized on that…I thought Pond Scum Protestors had a nice ring to it.” 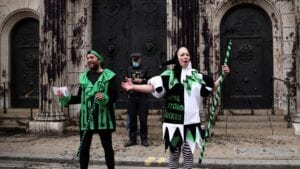 What could I say? These were my people in a fashion, and they were dragging us all down.

“Listen…” he continued, I’ve got to run but let me send you the link, they sure need help.” He was nearly chortling before saying goodbye.

It was both embarrassing and tragic. After pond-scumming the bank, they’d gone on to demand the Bank of England “make banks integrate climate risks."

Firstly I don’t think they meant to say "integrate risks" and second, asking banks to regulate themselves, is, I am sure, also not what they meant but something banks would be all too-willing to agree to do.

Oh, and they were dressed like jesters. Actual jesters. If the visual was not bad enough, the historical association was that of fools, who existed to entertain the Crown.