“Headache!” I called quietly as I threw the saddle on the buckskin I’d be riding that day, calling out to ensure the wrangler saddling her horse next to me in the 4:30 a.m. high-mountain blackness knew a stirrup was on its way over and down and not to rise up suddenly into its bone, leather and steel. Saddled, bridled, jacketed and mounted, six of us rode up a gravel road walled-in by a black forest of tall pines, our way lit only by starlight and the occasional spark struck by the shoe of a horse against the stones. The Bighorn Mountains were all around us as the sun touched first the distant, snowy peaks. We were 8,300 feet up in the Rockies of western Wyoming.

I took my group of riders up over a forested ridge and out one of our more spectacular trails. An hour into our ride, emerging from the forest into the morning sun, we paused to let the horses blow. We looked across a wide valley and down on a high meadow. Behind us the sun-dappled ground and leaves and trees of the forest as the day rose. Below and to our right a few beaver ponds greened-up the area, watering it for elk, deer, badgers and other animals and plants. 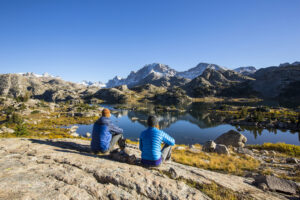 Wind River range: enjoy the view while it lasts.

Straight before us the valley dropped off for miles and thousands of feet. Tens of miles away and across that valley the Wind River range rose, blue with distance, snow-capped beneath late-morning puffball clouds on a serene and sunny day. In the bright blue sky above, golden eagles circled riding thermals while prospecting for their next meal or just soaring over the land in their limitless freedom.

If there is more beautiful country in the lower 48, more varied wildlife and greater opportunity to experience it than in the Rocky Mountains of western Wyoming, I’m not aware of it. But it’s the eagles that draw attention. High, regal, effortlessly gliding, circling above us, having long-ago conquered the skies in a way man never will.

And being destroyed by wind “farms,” in which wind energy companies get “kill” permits to destroy these amazing raptors using the wind highways they have used for hundreds of thousands of years only suddenly to encounter instant, unknowable death. Male, female, young, old they are killed by the incredible blunt force of a 12-ton blade moving at over 100 mph. Force = Mass times Acceleration. You do the math. For a kilowatt. For a company profiting on tax dollars devoted to an energy form civilization left-behind centuries ago, and that could not have powered our progress to today, nor keep us warm, alive, fed and producing, as Germans are about to discover. Yesterday Solyndra, today ES Windpower, Inc. Tomorrow? Who will destroy our environment with our tax dollars tomorrow?

Federal wildlife officials are pushing wind companies to enroll in a permitting program that allows them to kill eagles if the deaths are offset. 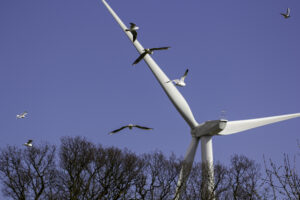 Look up in the sky at an eagle circling, rising, falling. In your mind’s eye, or here if you don’t live where they soar effortlessly across the land. “If deaths are offset?” What kind of bureaucratic mumbo jumbo for the slaughter of these magnificent birds is that? How do you “offset” a dead eagle? With a check? A tear? A carbon credit? How do you offset hundreds of them?

Nationwide, 34 permits in place last year authorized companies to “take” 170 golden eagles — meaning that many birds could be killed by turbines or lost through impacts on nests or habitat.

Were those “kill permits” abused? Of course they were.

In April, a Florida-based power company pleaded guilty in federal court in Wyoming to criminal violations of wildlife protection laws after its wind turbines killed more than 100 golden eagles in eight states. It was the third conviction of a major wind company for killing eagles in a decade.

Golden eagles are “on the edge,”

The rush to build wind farms to combat climate change is colliding with preservation of one of the U.S. West’s most spectacular predators — the golden eagle — as the species teeters on the edge of decline.

And not just in Wyoming.

The Fish and Wildlife Service estimates that on average, more than 20 golden eagles are probably killed each year among the wind turbines of San Gorgonio Pass, out of an estimated 120 golden eagle deaths annually at wind farms across California.

It is not just Golden Eagles being destroyed by these wind farms. It’s the Amazon Rain Forest, the “Lungs of the Planet,” the largest carbon sink on earth. For these blades increasingly are made of fiberglass-wrapped balsa wood from the Amazon. And that’s a problem.

As the international commitment to renewable energy has grown in recent years, the increase in wind farms has triggered a huge demand for balsa wood, leaving a trail of deforestation in its wake…

The balseros bring alcohol, drugs and prostitution, and pollute the extraction sites with plastics, cans, machinery, gasoline and oil spills. They abandon used chains from their chainsaws. They eat the turtles and chase away the parrots, toucans and other birds that feed on the flowers of the balsa trees. The breakdown of ecosystems by illegal deforestation has profound impacts on the balance of local flora and fauna, which will never recover.

Killing their birds, too.

Cutting down a large balsa tree affects ecosystems. Its canopy shelters plants that now dry up under the scorching sun of the equator. Birds that feed on balsa flowers no longer sing as they used to; parrots have now gone in search of new homes; tapirs and sajinos (wild boar of the jungle) are now exposed, leading to an increase in illegal hunting. 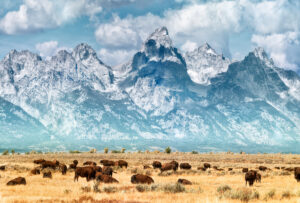 Wyoming: where eagles dare to fly and die.

We are not just cutting down Balsa trees in the Amazon for wind. Scotland just felled fourteen million trees to make way for wind farms. A German-owned plant in Texas is producing 578,000 tons of wood pellets to ship to Germany to burn for heat and fuel, a practice even older, even more outmoded, even more damaging to the environment than pretending wind can power a modern economy. If one wants to reduce atmospheric carbon, felling millions of trees that perform carbon capture—and then burning them—seems counterintuitive.

At some point, perhaps sooner than we think, today’s nonsensical hysteria on climate will be replaced by some other nonsensical hysteria designed to keep politicians in power and spending our money while reducing our freedoms. The thousands of eagles still will be dead. Their progeny never will have existed. We all will be the poorer for it.