Ottawa’s orchestrated vendetta against Canada’s energy sector, located primarily in the province of Alberta, is an instance of sublime indifference to the laws of physics, the math behind energy realities, Canadian living standards and the national welfare. It is part and parcel of the campaign to bring Canada in line with the U.N.’s anti-capitalist, globalist wealth-transfer program advantaging the Third World—in actual fact, benefiting only the ruling class of these nations.

And it is, of course, a scheme for enriching investors and "green" industrialists for whom the Green Technology adventure has become a government-fed cash cow, abetted by public gullibility and self-righteousness. Conservative Alberta is now at risk of bankruptcy. 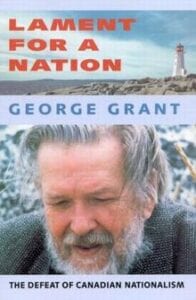 Canada’s great conservative thinker, George Grant, wrote in Lament for a Nation that "Canada was predicated on the rights of nations as well as on the rights of individuals.” He might also have written “the rights of provinces.” The book’s subtitle, The Defeat of Canadian Nationalism, bespeaks Grant’s abiding fear that the country had forgotten its conservative origin in communal solidarity and had sold its future to a managerial elite wedded to the notion of unmitigated “progress.”

A devout traditionalist, Grant was skeptical of unrestrained capital markets and of what he called, in Technology & Justice, “technological ontology.” Liberals—and some Conservatives—consider him out of touch with modernity, a throwback to a pre-modern age. But his emphasis on individual responsibility and commitment to the values of truth and justice remain the core of conservative thinking. In the “Afterword” to Lament, his widow recalls one of Grant’s “simplest statements: ‘It always matters what each of us does.’”

Modern Canadian conservatism owes much to Alberta-born Preston Manning, founder of the Reform Party, which was succeeded by the Canadian Alliance and ultimately by the Conservative Party of Canada. As articulated in his The New Canada, Manning believed in fiscal prudence, the need to control the deficit and to live within our means, in doing away with redistributive economics and progressive taxation and relying instead on market forces and job creation. He believed in the reduction of federal power and in the provincial management of political and economic responsibilities. For advocating such ideas, Manning said, “We were called everything under the sun, from fascists to traitors to racists.” How such a sensible and mature platform can be condemned as “far right,” extremist, or as some sort of nascent fascism boggles the mind. 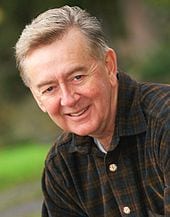 Manning understands energy and its crucial importance to priming the engine of prosperity, facilitating job creation and strengthening the Canadian economy across the board. He urges provincial cooperation to “put enormous pressure on the Federal government to get pipeline rights of way to both the Pacific and the Atlantic.” In his new book Do Something!: 365 Ways You Can Strengthen Canada Manning writes: “[W]e need unobstructed transportation corridors to the Atlantic, Pacific and the Arctic to move our resources to tidewater and world markets. We need a federal government that’s supportive of these kinds of measures rather than one that obstructs.”

Manning is also deeply concerned about the corrosive prospect of growing Western alienation. “The problems with the energy sector,” which he lays at Ottawa’s door, “and the inability to get resources to tidewater and world markets are all fueling Western alienation.” He is right. Wexit is picking up momentum and Wexit Canada is now an official political party.

Former Conservative PM Stephen Harper (aka “Harperman,” as the socialist rabble and environmental scientist Tony Turner maligned him) was often tarred as “far right” for his fiscal prudence (which steered us through the 2008 financial meltdown) when, to be accurate, he was a “conservative centrist” some of whose policies—maintaining high immigration rates from Muslim countries, or refusing to re-open the abortion debate—consorted with Liberal positions. Some have criticized him, too, as being somewhat ambivalent on the oil patch, neglecting to build a sufficient pipeline distribution network. Harper did not govern as effectively as he could have, but as a trained economist he understood the industry that contributed massively to the country’s prosperity.

Prime Minister Justin Trudeau, who is leading Canada to an Argentinian-type default and economic collapse, setting his sights on net-zero in more ways than one, is no friend of George Grant, Preston Manning or Stephen Harper; he is much closer to his father’s socialist influence Harold Laski, who was Pierre Trudeau’s mentor at the London School of Economics. Laski held that capitalism inevitably led to internal contradictions, economic crashes and depressions, and proposed the socialist control of natural resources and property to be shared by all of society’s stakeholders. 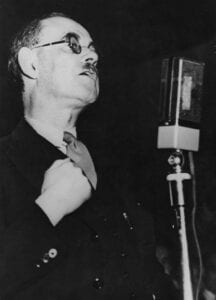 The predictable irony, of course, endemic to all socialist regimes, is the splintering of society into warring interest groups, the eventual imposition of top-down single party rule, and the disintegration of a common culture once based on historical precedent and loyalty to one’s neighbor. As we see in the Western world today—Canada is no exception—the sense of unity has been replaced by entitlement categories like ethnicity, race, gender, creed, class and selective political persuasion.

Indeed, in opposition to Grant’s sense of national unity, which inspired both Manning and Harper, Trudeau has stated that Canada is a “post-national state” that has no “core identity.” A country that has no core identity is not a country preoccupied with issues of national unity and the economic foundation on which it rests. Trudeau is not interested in the oil patch but in the national patchwork. He is an outright socialist—perhaps Marxist is a better term—and an aspiring globalist who lusts for a seat in the United Nations’ bloated hierarchy.

Notwithstanding his sentimental effusions about the country he leads, Trudeau is, to put it bluntly, anti-Canadian, and his animus against the energy sector and the economic stability it provides is par for the course. Like a good Marxist, he is busy steering the nation into monumental debt and abject penury. Tex Leugner, one of the lay leaders of the Wexit movement and editor of the ActionAlberta newsletter, is very clear on this. “Each day,” he writes, “Canada loses between $80 and $100 million because of the failure of our Federal Government to allow pipelines to be built. At this rate, over the next 12 months that amount could balloon to as much as $36.5 billion lost to the Canadian economy! As this money is lost, our Federal debt continues to increase.” And that’s only for starters. Statistics Canada reveals that the “poverty gap” under Trudeau has grown—in figures for 2018, two years before he had a chance to do even more damage.

The question now, following the election of the waffly Erin O’Toole to the Conservative Party leadership, is whether the Conservatives can be counted on to pursue a sane, nation-restoring agenda. O’Toole is committed to net-zero emission by 2050; if he ran an online journal, it might be called The Pipedream. Indeed, he has just signed on to the Paris Climate Agreement in a doomed attempt to out-Trudeau Trudeau. Considering that there is no hard scientific evidence that the globe is warming, that the U.S. as major signatory has pulled out of the Accord, and that, in any case, China and India, the world’s largest polluters, have no intention of reducing emissions, the Agreement is not worth the paper it is written on, though it will cost its adherents dearly. O’Toole is merely virtue-signaling for electoral purposes.

The only leadership candidate reliably true to the tradition of Grant and Manning was Derek Sloan, who may find himself cast into outer darkness for, among other things, voicing justifiable suspicion of Canada’s chief health minister Theresa Tam’s loyalties. Hong Kong-born Tam was all over the map in her COVID recommendations, hewing closely to the China-inspired line of the World Health Organization while sitting on one of its prestigious boards. 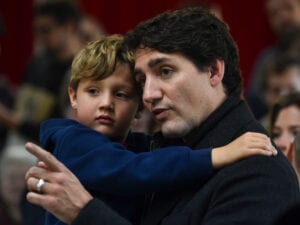 The fact that she happens to be Chinese was (and is) irrelevant, but it was enough to generate accusations of racism from the Asian community and from Conservative MPs Gordon Chong and Pam Demoff. “[T]he Conservative Party that I know does not stand for this kind of garbage,” Chong blustered. Demoff for her part accused Sloan of “racism, misogyny, and bigotry.” The attempt to “cancel” Sloan and destroy his political career is evidence, once again, of how easily people can be duped into taking offence at reasonable skepticism—or how cynical they can be in trying to score political points. I have indicated in a previous article for The Pipeline that Tam’s behavior was highly dubious, lying about the mode of viral transmission and even removing vital information from airport message screens regarding flights from China into the country. O’Toole has not come to the defense of Sloan and is cannily playing the popularity game, which seems to make him, at best, a Diet Conservative.

Clearly, the Conservative Party has some trouble aligning itself with true-blue conservatism represented by a genuinely conservative politician like Sloan, an upholder of traditional usages and institutions, a stringent anti-socialist, a Canadian patriot, and a vigorous supporter of the energy industry. Alberta is where the country’s energy resides. Sloan is where the Party’s energy lies. It is by no means surprising that both have come under the shadow of repudiation. 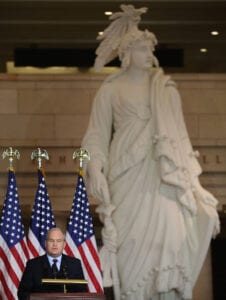 There can be no doubt that a mushy O’Toole would make a better Prime Minister than a spongy Trudeau, but this does not change the fact that Canada’s two major energy fields have been suffering catastrophically and, barring a miracle, will likely continue to do so. One field is obviously the oil/gas/pipeline sector, which is in process of being phased out. The other is Canada’s political energy zone, presumably a national endowment, which has been going increasingly woke. With these two sources of revivifying energy—generated power and political intelligence-and-integrity—seemingly moribund, Canada would have little future to speak of.