The price of gasoline is an obvious example. Prices at the pump have doubled and more since President Biden took office. This did not happen because there is any shortage of crude oil reserves or refining capacity. This happened because Congress knowingly granted unelected bureaucrats at agencies like the Department of the Interior and the Environmental Protection Agency the power to override market demand for crude oil and refined products.

The choice to utilize that power or not then rests with the executive branch, aka: the President. Trump reigned in Interior, the EPA, et al. The result was that we did what Barack Obama tartly assured America we could not possibly do: we drilled our way to two dollar per gallon gasoline. Biden has given Interior, the EPA, et al. their head to gallop away and even applied a bit of the whip for good measure. The result? It’s a crapshoot whether your next fill up will set you back a Franklin, or just a handful of Jacksons. 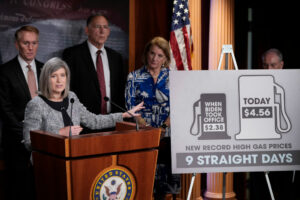 Where does it stop?

How does this mindset, or rather lack of mindful attentiveness, lead us to the baby-formula shortage we face today? There are at least three reasons, all inter-related and all applicable to the production of most every vital resource domestically produced today.

Globalization Breeds Automation Breeds Consolidation: It will be a very, very long time till the cost of labor in developing Asian countries like China approaches anything like equity with the cost of labor in nations that are industrially and economically mature. The only way to stay domestically competitive in many an American industry is to rely more and more on automation. While the capital investment to automate processes is significant, the operating costs once the robots go to work are trivial. Plus, they are unlikely to demand mental-health wellness days or gender re-assignment elective surgery.

If one is going to invest in automation, it makes the most sense to make that investment a single time at one big plant rather than multiple times at a plethora of small plants. I do not claim to know the baby formula market, but I have seen this time and again in other markets. As automation takes root, consolidation follows and products that used to come from dozens of factories scattered across the country now come from a handful of plants. The fact that the shutdown of Abbott’s plant in Sturgis, Mich. could have such a marked effect on the baby food market strongly suggests to me that the baby formula market has followed that course.

Bureaucrats Wear Blinders:  Bureaucrats are necessary. I won’t even say they are a necessary “evil,” because there is nothing inherently evil about telling a fair-minded person that his job is to “make sure thus and so is done, and done correctly.” Still, there must be limits to the power of a bureaucrat. A company does not want an accountant to forgo auditing their books in order to stroll over to the Research and Development department to opine on new formulas the chemists are trying out.

But there is another side to that mindset. Having their role narrowly restricted, many bureaucrats seem to believe that the world they are allowed to impact is the only world that exists. As the old saw suggests, a carpenter equipped only with a hammer tends to see every problem as a nail.

Imagine if you had cause to be concerned about the welfare of children at a neighbor’s house. The Department of Children and Family Services sends an inspector over. That inspector is charged with looking at everything that impacts the welfare of the children and to weigh competing factors before making a recommendation. The official may conclude the children are being well cared for, or that there are certain shortcomings in the household that should be corrected. When DCFS does it’s job correctly, it removes a child from a household only if the child is in clear and imminent danger. If the kids are living on fast food and Goldfish crackers, the inspector may recommend dietary improvements. If the children are not being fed and living in filth, they will and should be removed from the danger and neglect. 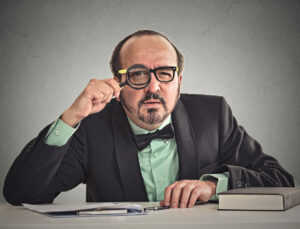 I'm from the government and I'm here to help.

In our example, what DCFS does not do is to send over an electrician to inspect the wiring and base their decision on whether the home is up to code. But that is precisely the mindset of the bureaucratic inspector, whether from the FDA, the EPA, OSHA or any other of the alphabet soup of government bureaucracies. And that leads us to the final problem:

Nobody Looks at the Big Picture: We are told that the Sturgis plant was shut down because bacteria (described by some outlets as “deadly," but hyperbole is as common in stories involving elements of risk as funny hats are at a Shriners convention) was found in the plant. Not only was the plant shut down, Abbott – surely at the advice of counsel – issued a recall notice for formula already on the shelves. Thus, the fear of tort liability more or less instantly caused a shortage and heedless bureaucratic despotism ensured demand could not be quickly satisfied.

Politicians love to piously declare that they are following the science, although few understand enough science to recognize gravity if you dumped a bushel of apples on their head. The bigger problem is that when they invoke the magisterial authority of science, they only consider one aspect of science, much as the blinkered bureaucrat considers only their own mission and authority.

There is another aspect of science involved here, as with the fossil-fuel debate, the vaccine debate, the gender debate, etc. That is the science of public welfare. That science is not about one thing, it’s about everything. It is precisely that science that our public officials are elected to consider and act upon.

Let's say that bacteria was found at the Sturgis plant. Was it truly “deadly”? Was it found in an isolated area? How widespread was the contamination? Is there anything that could be done to ensure that formula already on the shelves could be used safely? Given the choice between boiling formula before using it and not having formula, I’m pretty sure what choice most mothers would make. Could Abbott have been protected from lawsuits in such a case?

There are many more issues that should have been considered before the plant was shut down and product recalled, because those two drastic actions have had drastic consequences for public welfare. Unfortunately this administration possesses no one with the courage to make those kind of decisions, much less that ability to understand they need to be made.