To save the American nation as founded, the first thing we have to do is restore the basic principles of the original American Republic. Most real Americans are familiar with Benjamin Franklin's famous reply to the question of which type of government the Founders gathered in Philadelphia in year 1787 had decided upon, a monarchy or a republic: "A Republic, if you can keep it." Nota bene that the word "democracy" was nowhere mentioned, nor was it ever seriously envisaged by the men meeting at the constitutional convention that year. As Churchill famously observed:

It has indeed been said. But if by "democracy"—or "our democracy" as the Left is fond of saying, by which they mean their version of "democracy"—we mean a universally enfranchised electorate that includes indigents, welfare cases, teenagers, layabouts, criminals, non-citizens, the unidentified, illegal aliens, and non-taxpayers, then it really is the worst form of government. Because, at that point, it's simply unrestricted mob rule under which the majority votes itself the wealth and possessions of the minority until the monetary and social capital runs out, after which the entire system collapses. 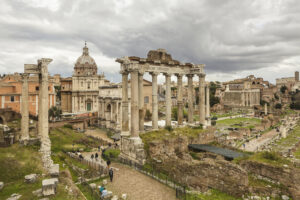 They had a good long run.

A republic is a form of government in which voting citizens elect representatives to small political bodies in order to vote on matters of civic interest or concern on behalf of the citizenry. The Romans, for example, were ruled in their Republic by a pair of consuls, serving simultaneously for a one-year term, and a senate composed of mostly wealthy men, usually aristocrats. There was also a host of lesser officers, including praetors, questors, aediles, etc. There was even an unwritten but constitutional provision for the office of Dictator in times of civic or national crisis.

Tribunes, who could be elected by the people or appointed by the consuls, represented the common folk, and had veto power over legislation. but overall the votes of the propertied classes and equestrians had a greater weight than those of the lower classes. Women, although citizens, were not allowed to vote or hold office; instead, their political power was wielded behind the scenes. A Roman politician could go very far as long as his wife's fingerprints were on the knife.

The Roman way may not be to modern tastes, but it worked from the expulsion of the Tarquins in 509 B.C. (the last kings of Rome) up to the assassination of Caesar in 44 B.C. (His dictatorship-for-life only lasted a month.) Caesar's death at the hands of his political opponents in the senate came at the end of a half-century of civil war during which time Rome's empire had outgrown the capacity of its political system to effectively govern it. Further, the increasing aggrandizement of personal wealth via military conquest in effect produced large private armies that were set against each other until the Battle of Actium in 31 B.C., in which Antony and Cleopatra were defeated by Octavian, soon to become Caesar Augustus, the first emperor. After all, Caesar conquered Gaul not because Rome asked him to, but because he needed the money.

As monarchy gradually made way for various forms of republicanism, at no time was a plebiscitary democracy—a society in which every man, woman, and child got a vote—ever envisaged.  There was no enumerated "right" to vote in the Constitution; the qualifications were largely left up to the states, which set minimum ages for voting in their own elections. Early on, for example, the original 13 colonies each had some sort of property qualification for male voters, and by the time the national constitution was ratified in 1789, free black men of property could vote in some jurisdictions. But as the Civil War loomed, and Southern Democrat animosity toward Africans hardened, black men had been stripped of voting privileges, and only got them back with the passage of the Fifteenth Amendment under Republican president Ulysses S. Grant in 1870. 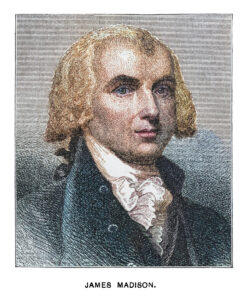 Madison: right from the start.

The subsequent history of the United States has been an ever-greater push to universalize voting "rights," to the detriment of the Founders' original notions of what constituted a government that could best protect individual freedom and God-given (not man-given) rights. As Madison said during the debates over the constitution in 1787:

Viewing the subject in its merits alone, the freeholders of the Country would be the safest depositories of Republican liberty. In future times a great majority of the people will not only be without landed, but any other sort of, property. These will either combine under the influence of their common situation; in which case, the rights of property & the public liberty, will not be secure in their hands: or which is more probable, they will become the tools of opulence & ambition, in which case there will be equal danger on another side.

Madison has, of course, been proven right. From the time of ancient Athens and the Roman Republic, no sane system of government ever afforded the franchise universally and uncritically. Today, as the chief advocates for the craze of egalitarianism in all things, the Left speaks of the franchise in religious terms, as a "sacred right," which is rich coming from them, since the only thing they currently hold sacred apparently is their right to contract monkeypox without social disapproval in their continuing pursuit of Dionysian sexual excess.

Just how badly the universal franchise has turned out can be seen in this current moment of our electoral politics. Chaotic elections in 2000, 2016, and 2020 have become the new normal. The Left howls about "disenfranchisement" even as it tears down all legal restrictions on untrammeled voting, most notably attacking the role of the states in determining eligibility (an authority that, as noted, goes back to the founding of the country) and relentlessly gutting protections against voter fraud.

And yet despite its ready availability, the vote seems not highly prized by the public, where it is routinely met by indifference by half the population. As urbanologist Joel Kotkin notes in his pessimistic piece on the upcoming election in Los Angeles, pitting white millionaire (and former Republican; California now is a one-party state) Rick Caruso against black female radical Democrat Karen Bass, the decision to pick the new mayor lies almost entirely in the hands of the members of the teachers' union. And you know whom they're going to vote for:

Unsurprisingly, some Angelenos have sought to reverse this disastrous course. Earlier this year, disgruntled residents united around property developer Rick Caruso in his insurgent campaign to become mayor of Los Angeles. Caruso spent over $24million of his own money on the first round of the election in June. Caruso is the grandson of Italian immigrants, whose father founded the successful LA business, Dollar Rent a Car. And he has himself been a big player in California for years. Yet Caruso’s mayoral bid appears to have stalled against the well-organized might of the city’s public-employee-driven political machine.

This is a powerful machine. According to Gloria Romero, a former state senator from east Los Angeles, this public-sector political machine has filled the vacuum left behind by weakened neighborhoods, a decline in local churches and the loosening of family ties. At the same time, turnouts for city elections have been dropping consistently, reaching only 14 per cent in the primary back in June. Meanwhile, practices like ‘ballot harvesting’, which allows campaign workers to gather ballots at nursing homes and other facilities with little supervision, make progressives all but unbeatable. This proved critical in the first round, as Bass, behind in the early results, ended up with a five-point lead after the late ballots were counted, which included those from harvesters.

You do the math. Universal suffrage plus low turnout plus powerful public-sector unions = civic ruination. The Democrats say they want everyone to vote and every vote to count, but what they mean is they want their people to vote, and only their votes to count. Reinstating a property requirement, or even restricting voting to those with a positive net worth (even if it's only one cent), regardless of race or sex—although there were and still remain strong arguments against female suffrage—would do wonders for governance, but it will never happen for reasons you well know. The point of the exercise is not to preserve the Republic for a better tomorrow but to destroy it.

Further, once the electorate understands it can vote itself funds from the public treasury, "their democracy" is suddenly our very big problem. You wonder why there's a "labor shortage" in the middle of a recession? The famous observation, "A democracy cannot exist as a permanent form of government. It can only exist until the voters discover that they can vote themselves largesse from the public treasury," attributed variously to Alexander Fraser Tytler and to de Tocqueville, is most likely apocryphal, but the sentiment remains true.

In the Federalist Papers, No. 10, James Madison wrote: "a pure democracy, by which I mean a society consisting of a small number of citizens, who assemble and administer the government in person, can admit of no cure for the mischiefs of faction... Hence it is that such democracies have ever been spectacles of turbulence and contention; have ever been found incompatible with personal security or the rights of property; and have in general been as short in their lives as they have been violent in their deaths." And when that "pure democracy" consists of everybody... 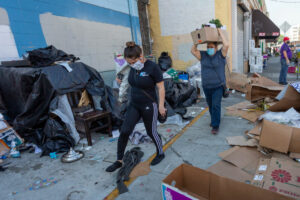 Los Angeles, where you can vote yourself a piece of the American Dream.

In their incessant quest to dilute the value of the vote by expanding it, the Left has shown its true anti-constitutional colors. Should one pose the value-neutral question, "Why should the franchise be universal?" the answer is "because." As we go about our efforts to restore the intent of the Constitution, it behooves us to remember the crucial role that property—"skin in the game," as we might say today—has played in the preservation of our freedom from the beginning. Now you understand why the communist/Marxist Left is so dead set against it, and why it has inverted the very concept of freedom against those who would preserve it.

We want, and were given, ordered liberty. We prize our Constitution; these blackguards despise it. But it's our Republic, not their "democracy," and it's about time we make that clear to them—by any means necessary, as they like to say.