We have been wearing masks for over a year. We have been quarantined in government facilities and in our homes. We have been rigorously locked-down in a futile attempt to control a virus that is clearly unimpressed by our efforts. The latest installment in the Covid frenzy is the love affair with the various vaccines, a mammoth suite of pharmaceutical interventions, that have flooded the market, promising eventual salvation from the ravages of the pandemic. Yet the negative side of these disparate vaccines has gone largely unreported.

While assuring us that pharmaceutical tests have been professionally run on the whole, New York Times reporter Alex Berenson writes in Unreported Truths about COVID-19 that “the companies failed to test the vaccine on the ‘right’ people—the people at high risk of dying from Covid. They failed to prove that it actually reduced deaths, leaving a tragic hole in our medical and scientific knowledge.” Berenson mentions “realistic theories about possible long-run harms from the vaccines, such as the risk that they can lead to a dangerous rebound effect on people who later become infected with COVID.”

In Berenson’s judgment, “regulators failed at every point in the development of these vaccines—the preclinical work, the major clinical trials, and the approval process”—though he gives them the benefit of the doubt, owing to the pressures they were under and still recommends that people be vaccinated. Nonetheless, all the vaccines accomplished was to “reduce moderate illnesses in people who were at low risk from COVID anyway.” 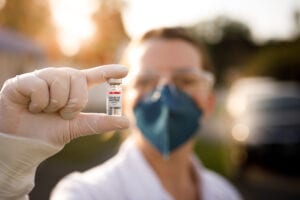 A little jab'll do ya.

The ramifications of the vaccines are far worse than that. Symptomatic reactogenicity is not uncommon. In just a few months, a spectrum of concerning side-effects have appeared, ranging from blood clots, erythema, cardiovascular ailments and Bell’s Palsy to anaphylactic reactions, swollen lymph nodes, chronic pain and untimely deaths. It should be no surprise that the general population will be constantly assured by a complicit network of authorities and pseudo-authorities that adverse reactions are statistically insignificant and should not be heeded. The incurious will be easily persuaded, especially as countervailing reports will be duly censored.

A typical example of what is really happening comes from British Columbia doctor Charles Hoffe who, in a letter to the Ministry of Health, reports “numerous concerning allergic reactions and neurological side effects from the vaccine,” and observes that “In stark contrast to the deleterious effects of this vaccine in our community, we have not had to give any medical care what-so-ever, to anyone with COVID-19.” He concludes that “this vaccine is quite clearly more dangerous than COVID-19.”

Equally worrying, mysterious problems of contagion from vaccinated to unvaccinated women have also arisen, causing serious and perhaps lifelong menstrual irregularities and reproductive dysfunctions following Covid vaccines. Dr Christiane Northrup, a leading authority in women’s health, argues that the vaccines do not entail a normal immunization program but create harmful synthetic proteins within the body, whose effects are transmissible. Naturally, she has been accused by the mainstream media of spreading disinformation, but the evidence for this newest pathology is compelling.

The effect on pregnant women is also very much in question. Children’s Health Defense (CHC) refers to Dr. Sherry Tenpenny, “a triple-board certified osteopathic medical doctor and an expert on the potential adverse impact of vaccines on health, who… brings up a most critical point, that we simply have no idea what the potential effects of these warp-speed developed, Emergency Use Authorized, experimental mRNA vaccines might have on a developing fetus.”

What potential effects these injections might have on the population at large is no less moot. The CHC editorial concludes with the rider:

This article contains a growing list of deaths that occurred after the experimental COVID vaccine was administered. The death reports are culled from the media and from social media, as well as from the CDC’s Vaccine Adverse Event Reporting System (VAERS) and reporting systems outside the US.

A Freudian slip by a newscaster reporting on a growing trend of vaccine refusal may have some truth to it. People are unwilling to be “euthanized,” he said, before correcting to “immunized.” The CDC (Centers for Disease Control and Prevention) considers the vaccines “safe and effective,” yet reports 2,794 dead, 56,869 injured following experimental Covid injections through April 5, 2021. Even CNN uncharacteristically reports that “5,800 fully vaccinated people have caught Covid anyway in US.”

The results from the U.K. are distressing, as they are from Norway and India. The news from Israel is no less disturbing. The mortality rates recorded in many sites are truly alarming. Other sites and fact-checkers downplay or scoff at these numbers as inflated, remarking instead on an infinitesimal percentage of adverse consequences. Sometimes the statistical accounts are so complex as to be difficult to assess. Obviously, the warnings will be contentious and the numbers disputed. 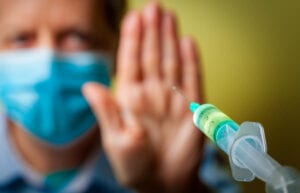 No thanks, I'll take my chances.

The truth is that reliable vaccines require ten or more years to develop and test, moving from the (1) exploratory to the (2) pre-clinical to the (3) trial and (4) post-licensure stages before they can be approved as safe for public distribution. Otherwise, not only their immediate efficacy but their future impact remains uncharted.

This fact is so glaringly obvious, it boggles the mind that it is rarely mentioned and commented on, or that it remains inadmissible in debate and discussion. A vaccine that arrives in just a few months when a decade or more is needed to create a reliable product cannot be trustworthy. They may, quite plausibly, be hazardous. What is known as “Operation Warp Speed” may pertain to the Starship Enterprise but is contraindicated in vaccine production. Slow and careful are the watchwords.

One can see the problems. We know the vaccines are clinically precarious for an undetermined number of recipients, but we do not know, regardless of what we are told, whether the vaccines are, on the whole and for a majority, actually effective, or merely placebos. Plainly, there are no means for ascertaining their effectiveness in the present moment—one takes it on faith.

Because someone may not or does not contract the disease following receipt of the vaccine is no proof of its potency; one may be already immune or resistant, or may suffer from the virus weeks or months later. And in the absence of longitudinal studies several years in duration, future side effects linger in a region of empty speculation and deferred research. People could find themselves suffering from any number of unexpected maladies—anemia, cognitive decline, clinical depression, or physical disorders as yet unspecified. Vaccines released years too early will likely have unpredictable pathogenic effects. Given their all-too-rapid and kluge-like development, the current rush to COVID-preventive jabs and boosters is a fools’ errand.

This fact has not prevented Big Pharma from scaling up its profit margin. Former Pfizer Vice President and Chief Scientist Dr. Michael Yeadon claims that new, top-off dosages designed to fight viral variants will be released without “clinical safety studies” and that these variants are in any case incapable of “immune escape,” that is, they are so similar to the original virus—“samients,” Yeadon calls them—that they are easily recognizable and controllable by a healthy immune system. Moreover, current “vaccines” consist of “superfluous genetic sequence for which there is absolutely no need or justification” while the ultimate purpose of these superfluous top-offs, Yeadon believes, is to surreptitiously give every person “a unique digital ID” in concert with the plans behind the Great Reset for global hegemony. 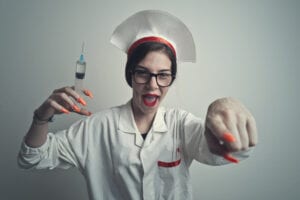 Even Merriam-Webster has joined the quasi-medical cult, newly defining the word “vaccine” as “a preparation of genetic material (such as a strand of synthesized messenger RNA) that is used by the cells of the body to produce an antigenic substance (such as a fragment of virus spike protein).” In reality, this is not a vaccine, which introduces antigens into the system to activate antibodies, but an invasion of one’s genomic substance in order to generate an alien protein.  Adding a layer of vexatiousness to the issue is the question involving the Nuremburg Laws. The informed consent principle was defined as a human right and was intended to prevent forced medical interventions in any form, including vaccines. The first principle in the Nuremberg Code reads in part:

The code’s application in the current circumstances is debated by many “fact-checking” venues, unconvincingly in my opinion. The fact-checkers need to be checked for their facts; when one considers that accounts critical of the vaccines are regularly suppressed by Big Tech and generally unreported or massaged in “the Marxist Mainstream Media” (the phrase is Dr. Steve Turley’s), one must be skeptical of unrestrained vaccine advocacy. The central fact remains that the efficacy of these drugs comes without proof, as should be obvious considering the conditions under which they have been fabricated: as noted, neither immediate nor long-term confirmation of their outcomes is realistically possible. Ignorance may be bliss, but only temporarily.

A historic court judgment in Weimar, Germany illuminates the overall dilemma. The vast majority of studies rely on “a purely mathematical estimation or modeling study based on theoretical assumptions without real contact follow-up.” We are proceeding without valid epidemiological knowledge. We do not know the precise extent to which our governments and their salaried health officials and media collaborators are lying to us or are simply incompetent and cowardly. We have no idea what may be coming down the pike. We do not even know if the vaccines work as they are advertised. One does not need statistics, only common sense, to be doubtful and even suspicious of their viability.