On this, the second anniversary of The-Pipeline.org, we present the first of a series of weekly columns that will appear each Monday morning. Everything on the table, nothing off the table. mw

And so we near the end of the Great Pandemic Hoax of 2019-22, an unprecedented and breathtaking power grab by governments around the world to seize powers far beyond their constitutional allotments and to transform a relatively minor flu virus — however originated and for what ill purposes — into a weapon of mass economic and emotional destruction whose effects will be felt for years and decades to come. It has been a textbook example of tyranny.

Consider it a warning shot, though, because while Covid may finally have been exposed for the non-apocalyptic event it always was, such tyranny is only the beginning until we put a stop to it. Put a stop to extra-legal "emergency" measures that are transparently and insultingly fraudulent, and which are invoked in the name of the "greater good." Put a stop to the notion of judicially sanctioned "protected classes" in a formerly classless society. Put to stop the notion of a "New Normal" of privation, deviancy, and spiritual and material penury imposed by Leftists as they continue their centuries-old task of undermining every tenet of Western Civilization in the name of "equity" — in a world in which equality is aspirational at best and equity is impossible.

And, once and for all, put paid to the notion that "when you've got your health you've got everything,"  the motto of a nation of neurotic hypochondriacs that is fundamentally at odds with every principle of the moral and socially productive life. For under this seemingly anodyne contention lies a wealth of mischief, chief among them the idea that your fellow citizens pose an existential threat to you by their refusal to conform, and thus can and should be restricted, incarcerated, or even killed as the need arises. And all in the name of Socialism, whether National or international. 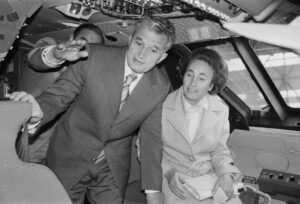 Nicolae and Elena in happier times.

As we've seen via a recent study by the Johns Hopkin University (a study of studies, really), the lockdowns imposed by states, countries, and municipalities everywhere in the name of "mitigating" the spread of an illness with a 99 percent survival rate in the name of public health were completely ineffective.

Far better to have done nothing at all; instead, families were separated, the elderly (those most at risk from the respirational difficulties caused by the likely Chinese-manufactured bioweapon) died alone and often in squalor; weddings and funerals were canceled or held "virtually"; businesses were shuttered and driven into bankruptcy; more than two years of schooling were ripped away from forcibly masked children; and colleges and universities continued their descent into mere parental-money shakedown rackets by offering education-by-Zoom as they continued with their main mission of gobbling up real estate to take it off the tax rolls and fatten their endowments.

And the only people held responsible for this sanctioned crime wave were... you. You, the uncooperative, the recalcitrant, the deplorable. You, the anti-social, the rebellious, the individualists, the fighters, the darers, the doers. You, the people who founded this country in defiance of central authority and rule-by-pronunciamento, you who pledge allegiance not to a political party or a strong leader, but to a flag and to the country for which it stands. One nation, under a God whom the other side has no use for, but only contempt. Just as they do for you.

It's become axiomatic that inside every leftist is a totalitarian screaming to get out. So if there's one positive thing Covid has done is identify those people for all to see: the slave-muzzle wearers, proudly exhibiting their servile natures. They're the Karens, the mask nazis, the buttinskis who can't leave you or your family alone, the ones who screech at the sight of the unmasked like Donald Sutherland ratting out a real human being at the end of the 1978 remake of Invasion of the Body Snatchers:

These are the same people who want to force you into electric cars but not provide a reliable source of electricity for them. Who wish to destroy the energy industries that built our nation, and leave you freezing or sweltering in the dark. Who condone and even encourage mass looting of shops, the murder of small Asian women waiting for a subway train, the shooting of policemen by the underclass, and the flouting of nearly every law of civilized behavior on the streets in the name of "social justice." And these are the people who, under the rubric of "climate change" and "the Great Reset," want to strip you of your home, your cars, your livelihood and, eventually, your life. No matter which office they hold, high or low or none at all, these people are your enemies and should be treated accordingly.

Make no mistake: Covid was only a beta-test, one that a submissive population passed with flying colors. Instantly repealed, without all that pesky business about amending the Constitution, were the first, fourth, fifth, and the eighth articles of the Bill of Rights. (The ninth and tenth, of course, have long since been rendered null, void, and nugatory. You remember them, the ones that reserve all unenumerated rights not mentioned in the Constitution to the people and the states.) This is why former president Barack Obama infamously referred to our founding document as a "charter of negative liberties." Which is precisely what the Founders desired. 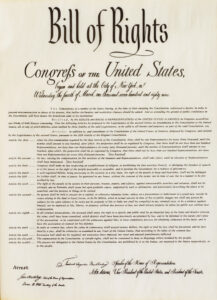 Ah, but "affirmative" rights sound so much better. Like FDR's Four Freedoms:  what could possibly go wrong with having government affirmatively promise you freedom of speech (already guaranteed by the first amendment), freedom of worship (ditto), freedom from want and freedom from fear. While they were never legislated formally, the first two were superfluous — and have in any case been repealed by Covid — and the latter two have been implemented by stealth under the false flags of "compassion" and "safety."

Affirmative rights, however, are essentially fascistic; your "safety" and material security, in the zero-sum mindsets of governments everywhere, come at the expense of someone else. Feminized guarantees of "safety" and "security" were standard fare in every European communist country until its collapse between 1989 and 1991, It's instructive to note that those are the same terms in which censorious social-media sites such as Twitter (from which I was "permanently banned" in August 2020 for unspecified "targeted harassment") and Facebook (in whose Sugarmountain Gulag I am currently spending another two weeks for "hate speech," which is Zuckerspeak for disparagement) couch their own "rules" and "community standards." The sooner both are destroyed, the better and freer everybody will be.

For when the preference cascade begins, punks, tyrants and dictators need to watch their backs as the real workers of the world unite. I spent the years between 1985 and 1991 shuttling in and out of East Germany and the Soviet Union, was in Berlin as the Wall was being torn down, and departed from Moscow just before the coup against Mikhail Gorbachev in the summer of '91. (The Soviet Union folded four months later.) I stood on Fisherman's Bastion in Budapest with Hungarian friends in late 1989, looking east over the Danube, as they expressed their fears of an imminent invasion from Romanian troops. Hope was in the air — the Wall had just fallen — but uncertainty still ruled. Would the useless George H.W. Bush administration come to their aid? Or, once again, would the fascist-communist tanks roll?

Instead, a miracle happened: the people, united, were not to be defeated.

On Dec. 21, 1989, the old dictator went to the well once too often, and called a rally he couldn't control. As the people's voices rose against him (if the Romanians had had trucks, they would have used them), his voice broke, his expression changed from confidence to befuddlement, the television transmission stopped, and he was whisked away. A rebellion that had started with a lone priest in the ethnically Hungarian town of Timișoara spread eastward across the country to Bucharest. The next day, the evil pair tried to escape by helicopter, but by then the army had switched sides. Ceaușescu and his wife were arrested, tried, and summarily executed.

IMPORTANT: Anyone attempting to bring material supports (gas, etc.) to the demonstrators could be subject to arrest. Enforcement is underway. #ottawa #ottnews pic.twitter.com/tp4e5d2xe1

Oh yes: "Those who cannot remember the past are condemned to repeat it."