Too few understand the scale of the Left’s attack on America. This lack of understanding stems from a rejection of what our senses are telling us and our refusal to think critically about our nation and the future liberty of our children. The now-renamed federal “Disinformation Governance Board” (more accurately, Orwell’s 1984 Ministry of Truth) the Covid “vaccine,” “climate change,” “transgenderism,” have nothing to do with truth, health, climate or one’s sex.

The Ministry of Truth… is concerned with erasing the truth of the past and present and replacing it with whatever the Party deems “correct.” Those in charge of the ministry decide what “truth” is.

What the Mis-Dis-Mal-information gang does have to do with includes spying on Americans and monitoring elections to ensure removal of any information that might be found in an abandoned laptop, for example, and preventing the investigation of voter fraud.

Federal authorities searched the suburban Virginia home of former Justice Department official Jeffrey Clark Wednesday... Clark features heavily in the House Select Committee hearing today that focuses on former President Donald Trump's efforts to push the Justice Department to do his bidding in the weeks before the Jan. 6, 2021 attack on the U.S. Capitol.

His crime seems to have been believing that the 2020 election had irregularities that might be worth investigating. 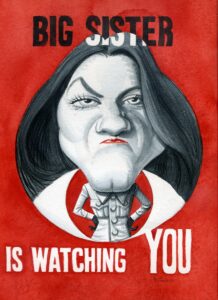 Forgotten, but not gone.

In March, President Biden issued an executive order to federalize the mid-terms that all polls show Democrats losing badly. You didn’t think Progressives were going to allow their accelerating fundamental transformation of America to be stopped by a silly mid-term, did you? As the reach of this column by Mollie Hemingway broadens, be assured it will be labelled MDM: Mis-Dis-Malinformation.

Executive Order 14019 ignores that the Constitution does not give the executive branch authority over elections. That power is reserved for the states, with a smaller role for Congress. With H.R. 1 and other Democrat Party efforts to grab more control over elections have thus far failed, Congress hasn’t authorized such an expansion.

Did the labeling of Hunter Biden’s laptop as "disinformation" alter the election outcome? We will never know. What we do know is that 48 percent of Americans believe it did and 16 percent of Biden voters would not have voted for him had they known about it. This is what happens by design when the government monitors and is allowed to label information rather than letting speech and thought survive, or not, in a free marketplace of ideas.

Having told the American people that this attack on speech and thought had been “paused” and Minister of Truth Nina Jankowicz fired, the administration gave the task of  truth assignment to the ever-vacuous Kamala Harris, and now, quietly, the Ministry of Truth is back in action.

Why was this clear violation of the primary right of all humans, to use our unique gift of speech to speak our unique thoughts freely – reinstated so quickly?  Because the truth of the costs of going green must be hidden until those paying these costs have already been impoverished.

White House national climate adviser Gina McCarthy wants them to censor content on the costs of a force-fed green energy transition, and "We need the tech companies to really jump in,” she said, because highlighting the costs of green energy is “equally dangerous to denial because we have to move fast."

"Highlighting," not lying about, "the costs" is disinformation. It is axiomatic that if free speech and thought enabled rather than hindered the goals of this Administration, censorship would not be on the table. The idea of censoring speech in America is a blatant and unconstitutional attempt to force the public to “choose truth over fact,” raising the questions, “Whose ‘truth’?” and, more importantly, "Who gets to decide?"

Those familiar with the totalitarian movements of the last century will see the demand to accept a "vaccine" (which does not prevent infection, does not prevent re-infection, does not prevent transmission, and so fits no previously-known definition of the word, “vaccine”), the acceptance of the "climate change" fiction, and the required approval and celebration of the sexual mutilation fantasy of "transgenderism," as exactly what they are: Party membership. Refuse Party membership by speaking against the Klimate Kult, refusing the “vaccine,” rejecting gender “re-assignment,” and be removed from school or your career and excluded from professional, social and economic life by the Party. 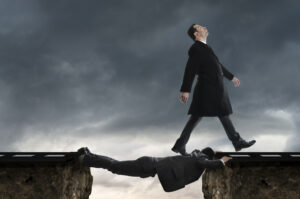 You will be made to care.

In 1945, General Eisenhower, the WW2 Supreme Allied Commander, European Forces, on finding the infamous death camps, marched the local townspeople through the camps to force the them to understand the evil to which they had turned a blind eye as millions were murdered and incinerated. No moral or ethical difference, only a difference of scale, exists between those German townspeople and those continuing to demand the “vaccine” be forced on others regardless of Pfizer's own documentation, “Cumulative Analysis of Post-authorization Adverse Event Reports,” that at least 1,223 recipients of their vaccine died and another 42,000 experienced “serious” adverse events in the first 90 days of injections. In the world of professional athletes, FIFA has noted the 420 percent increase in athlete deaths in 2021. That the FDA accepted this “vaccine” as “safe and effective,” is indicative of a government that "choose[s] truth over fact.”

We are ruled by those not interested in freedom, liberty or truth. This is what former president Trump meant when, in his inauguration speech, he said,

It was that giving back power to those to whom it belongs that got him run out of town on a rail.

For those not yet connecting the dots, here is Obama campaigning in 2008:

A straight line connects that speech to our new Truth Ministry. From here on, things will only get worse unless our own national socialists are stopped, now.