A few years back, my wife and I were staying at a family-run country inn for a couple of weeks of R&R in the Thousand Islands, a magnet for summer visitors from around the world. Sitting on our balcony, we observed a group of Chinese tourists filing out of a tour bus, several of whom, carrying packed lunches, negotiated the rock perimeter that separated the establishment from the road, strolled across the carefully tended lawn, entered our landlady’s garden gazebo, and made themselves at home.

They proceeded to spread their lunches across the table and fell to amidst convivial chatter, oblivious to the fact that they were on clearly marked private property. Somewhat taken aback, it slowly dawned on us that they had no sense of private property, no awareness that such a concept even existed—the collectivist mindset in a nutshell, or in a gazebo. The inn’s grounds and gardens were, apparently, held in common by the people, to be enjoyed at no expense of personal investment and maintenance. 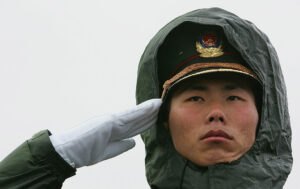 All your stuff belongs to us.

Ownership of property, as John Locke famously argued in The Second Treatise of Government, which establishes the legitimacy of “original appropriation” and rightful exclusion, is the keystone of the democratic state and the very foundation of personal liberty. Our visitors were plainly strangers to the idea, having been educated and domesticated in a totalitarian nation. What is one to make, then, of a high-placed public official in a liberal democracy who plainly shares an equivalent sensibility?

Responding to questions concerning Bill C-19, currently in its second reading before the Senate, Canada’s Justice Minister David Lametti recently claimed that “You don’t have an absolute right to own private property in Canada.” Among a series of other repressive measures, such as new luxury taxes and Climate Action Incentive payments, the bill would allow the government “to seize and cause the forfeiture and disposal of assets held by sanctioned people and entities, to support Canada’s participation in the Russian Elites, Proxies, and Oligarchs Task force in light of Russia’s illegal invasion of Ukraine.”

The problem is not only that the bill may be in violation of international law. The problem is that the bill can be readily weaponized by the government at any time against its own citizens, thereby stealing their property via a form of nationally-implemented eminent domain, exercised arbitrarily over every facet of citizens’ lives. We can’t say we weren’t warned. In Democracy in America, Alexis de Tocqueville pointed out that, without safeguards and a sense of “civic virtue,” democracies were prone to elevate tyrannical rulers intent on “penetrating into private life.”

Democracy in Canada is no different. Knowing the authoritarian proclivities of the Tyrant on the Hill, as prime minister Justin Trudeau is colloquially called, it’s a safe bet that the concept of a private self, and of the belief in personal property which anchors it, are not especially cherished by our Dear Leader, except insofar as it applies to him. Trudeau is more than capable of initiating Canada’s “illegal invasion” of his own country. His justice minister has merely expressed the prime minister’s deepest sentiments and controlling agenda. 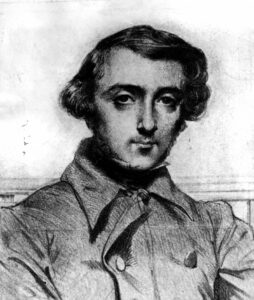 Such perfectly demagogic statements uttered by the justice minister also perfectly encapsulate the state of affairs in what can no longer be considered a democratic nation. We may “have no absolute right to own private property,” which can be expropriated whenever the government desires, but the outright theft and suppression of citizens’ rights do not stop there.

Parliament itself has become something of a joke, acting as a pedigreed club in which substantive issues affecting the lives and livelihoods of citizens will not be seriously discussed. It appears that we have no absolute right through the Freedom of Information and Protection of Privacy Act to examine dodgy and controversial government documents and orders leveraged against citizens, which are increasingly sequestered under the chevron of confidentiality and solicitor-client privilege. Senator Claude Carignan unavailingly chided the evasive and supercilious deputy prime minister Chrystia Freeland in special committee treating of the Emergencies Act, frivolously invoked to suppress the Truckers’ anti-vaccine protest: “We need information and documents, not a figure skating show.”

As Rex Murphy pungently quipped in a National Post column, “Granted the committee investigating the use of the Emergencies Act is only about piddling, trivial matters: Civil Liberties. Bank Accounts frozen. Arson alleged. Property seized. Police jamming the streets. Jail without bail.” The parliamentary exchange, he continues, “is proof of how far [our leaders] have drifted from the feelings and understandings of ordinary people”—though I would add it is also evidence of how far our leaders have strayed from the basic presuppositions and principles that ground the existence of a parliamentary democracy. We have no “absolute right” to expect fairness, honor or constitutional responsibility from our elected representatives. 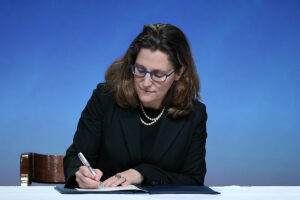 Freeland: all your stuff belongs to us, eh?

One recalls the catchphrase adopted in essence by Claus Schwab’s World Economic Forum (WEF) planning the New World Order, envisioned as the Great Reset: “You will own nothing and you will be happy.” The first part of the statement is true, the second part not so much. More to the point, the oligarchs, technocrats, plutocrats and directors of the administrative state promoting the Great Reset will own everything and they will be exceedingly happy. We know that Justin Trudeau and Chrystia Freeland are graduates of Schwab’s Young Leaders training programs, and are fully on board with the WEF’s globalist project to remake the world in the interests of a powerful and unaccountable elite. Our absolute rights are now the government’s absolute prerogatives.

It is as if we are watching Justin Trudeau, his cabinet and his caucus strolling across our property, entering our gazebo, and spreading their lunch across the table. The irony is that we, who once assumed that we were guaranteed property rights to our dwellings, our bodies, our opinions, our bank accounts, our need for information, and our Charter and Constitutional provisions—now watch helplessly as the political tourists who roam in and out of public office in this country are now the de facto proprietors of our legal and legitimate possessions. The experiment in confiscatory policy is occurring before our eyes as our very lives are inexorably subject to official annexation. It appears that David Lametti was correct. Indeed, we have no absolute right to anything and Canada has become the world’s shining example of the greatest act of larceny in the history of the democratic state.