It’s official! According to Judith (mummy), their phone in St John’s Wood has been ringing nonstop with calls from my former school chums, (and some I wasn’t all that chummy with) ever since I was on the cover of Paris Match. I’m not sure how that ranks higher than my place on the Olympic Equestrian Team but perhaps they share a keen interest in the environment. Although frankly I doubt it.

One such call really got under Judith’s skin as it was a reporter asking if she too ate bugs, and if it were a habit she’d picked up in China. According to Daddy she corrected them and hung up. After all, it was British Hong Kong (not China) and I doubt mummy ventured outside of the shops where she saw other Britons in Karl Lagerfeld or Prada. It was quite the fashion parade according to the pictures she kept and well… if you knew Judith she doesn’t even eat Chinese food here in England. After that, Daddy took the calls and deftly provided my email. His is the kind of voice one knows not to ask probing questions. 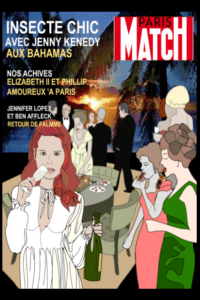 Bugs aren't really animals, are they?

Out of a half dozen or so emails I’m now set to appear on This Morning with Gino D’Acampo and the morning programme Breakfast out of New Zealand. This I will do by video conference as New Zealand has decided not to let me in unless I’ve been fourteen days in Australia or the Cook Islands, (as if) and there certainly isn’t time enough for all that. Oh the nerve of these people! Maybe they should have a look at their very own flag and realise the Union Jack figures rather prominently. I’ve just had it with draconian restrictions that make no practical sense, especially given I didn’t contract anything during my actual travels… it was when I was holed up in Annabel’s country estate that we both took ill, and recovered just as quickly.

I’m also rather put off after reading so many horror stories—like that of the footballer who got stuck in an Indian airport for three months or the Australians who were basically arrested for finding a clever way back home and I just don’t want to have to call Daddy, or Patrick, or (God forbid) my fabulous new client to wrest me free from some horrible lockdown.

The main question now is what to wear. I’d had several Dahlia Macphee options overnighted to me which are known to be (mostly) vegan clothes but unfortunately they were all gowns…and not appropriate for a morning show. Umasan sent me loads of ‘ethical’ separates—none of which became an ensemble, and thankfully one other ethical/sustainable/vegan designer who fit the bill perfectly—bright colours and reasonably flattering… or at least nothing that a good clamp in the mid-back wouldn’t fix for the camera.

I just needed a good forty-five minutes with Daddy to explain to me just what was going on with China’s new push to non-Bitcoin cryptocurrency. One of the talent bookers asked me some questions about it and I needed to be ready in case it came up on the show. He mainly asked why China is now moving away from the eco-disaster that is created by mining iBtcoin and if I believed my exposé had any effect. Daddy answered:

‘Jennifer’s press secretary how can I help you?’

‘Very funny’ I countered. ‘But I do need to ask a few things.’

‘She was always a wonderful child… helpful, kind… walking and talking at six months…’

‘Daddy! I need to ask about cryptocurrency. More specifically China’s departure from mining Bitcoin in favour of something more eco-friendly.’

‘I should think you’d be thrilled. Clearly China’s gone green.’ 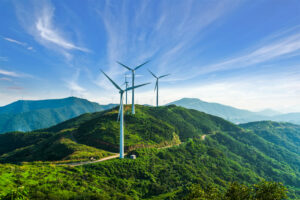 ‘Do you really think so?’ I asked.

UGH! Two minutes in and I’ve asked a stupid question.

‘I’m not an expert on China’s but it’s always safe to say if China is doing anything, it’s because it benefits China.’

‘So…’ I began again, ‘Can I just frame this as China being in step with a green future?’

‘If you can say it with a straight face—then by all means, yes, say it! But if you are looking for my advice, I would suggest you don’t frame it at all, and in this way you don’t have to backtrack when China continues to find new and worse ways to destroy the planet you love so much.’

I wasn’t sure if I felt better or worse but he had saved me from looking as foolish as Greenpeace falsely extolling China’s green virtues. With this in mind I felt prepared for my video conference which was fast-approaching due to the ten-hour time difference between Saint Tropez and New Zealand.

Just then I got a call from my oh-so-ethical wardrobe supplier. It seems ’after consideration’ they will to ask me NOT to wear their clothes as their PR focus had been animal organisations, and ‘couldn’t risk being seen supporting blatant animal cruelty’. WHAT!? ME? I literally held the phone away from my head as I pondered what absolute rot she was on about. Apparently she was under the very misguided belief that eating bugs was eating animals, which OKAY technically it is, but it is the more green option.

I wanted to scream I’M THE GOOD PEOPLE but I just let her adenoidal rant continue. That was until she said the word ‘standards’ —meaning she was questioning mine and at which point I just hung up. What cheek! If they sent anyone to collect their clothes I was going to tell her I’d recycled them with the other trash. And little did she know I’d never actually eaten one of the crispy critters but then I wasn’t exactly advertising that. It was far too late to get any other clothes shipped to me so I just fumed for a few minutes while deciding what to do. I went back to the Dahlia MacPhee gowns and decided to make a full go of it— glam hair, earrings, lipstick and dramatic lighting. Done. 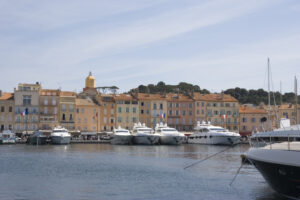 I was ready with plenty of time to spare and took a tip from Judith in her debutante days… I lay perfectly still on my back with a silk scarf under my head and set my alarm for one hour. She would have been rather proud of me as I woke up—hair and make-up still impeccable and then sipped on lemon water until we were live. Frankly I looked fabulous. And thank God for that because five seconds in I found they did not want to talk about China’s crypto-at all. It was the bug show all over again. “Our International bug hostess… Jenny Kennedy!"

I smiled even wider knowing it now made perfect sense for a hostess to be dressed for entertaining until they asked if (OMG not again!) I’d eat a bug for the camera. I felt that familiar bile creeping up the back of my throat. Luckily, I mean ‘Sadly’ I corrected…  'we’ve set up our entire spread for an after party that I’ll be hosting later.’ It was a small lie but it beat the heck out of losing it on international television. Just one last smile and we were out. Whew! I clapped shut my computer and opened a hard-earned bottle of champagne. It’s possible it goes well with crickets but cheers to standards.