So purple Arizona filed the first State lawsuit against President Biden’s federal vaccine requirement. Interestingly, the filing is not based on federal government overreach, or the emanations from a Constitutionally-unstated privacy penumbra for Americans (popularly: “My Body My Choice”), or the violation of the ADA that prohibits Americans being asked about their health and medical status:

The Equal Employment Opportunity Commission has found, for example, that an employer may not release an employee's medical records even if they are subpoenaed in a lawsuit, unless the employee consents.

Which law are we supposed to obey, and which violate? I’m confused.

States being superior in our form of government, superior Arizona is suing the inferior federal government based on the Equal Protection clause of the Fourteenth Amendment of the U.S. Constitution  through which the States created – and limited the powers of – the federal government.

It can perhaps be said that the Equal Protection Clause is at the core of the 14th Amendment. After all, this amendment was passed in the wake of the Civil War in attempts to remedy some of injustices that led up to that war, like racial inequality and slavery. While slavery is specifically dealt with in the 13th Amendment, inequality is dealt with here. Though race and racial discrimination are still at the heart of the Equal Protection Clause, any unjust government classification – the singling out of one group or another – can be a violation of the Constitution.

The clock is ticking...

By exempting illegal aliens and Afghan immigrants from a mandate for the rest of us, Biden’s diktat “singl[es] out of one group or another” of the population and treats these groups differently. (You may recall we once had a war over this.) This mandate and the exemptions are pretty much the opposite of the Equal Protection clause of the Fourteenth Amendment, (and the Due Process clause of the Fifth Amendment) and inarguably violate the Constitution. Arizona noticed and is suing to put the feds back in their Constitutional box where they belong, saying, “Yes, the Constitution does matter.”

Perhaps one of the SCOTUS precedents Democrats always demand never be overturned (“stare decisis”) has been un-overturned and reinstated and the Plessy-Ferguson “Separate but Equal” doctrine is again in force? I must have missed that memo.

If Biden’s marionette team wants to grant exemptions to employees of the Executive branch, well, that is indicative of this not being about healthcare. These employees are in every State and nearly every city in the nation spreading their unvaccinated covid viral load among the vaccinated (obviously unprotected by the “vaccine” or why worry?). Mandating the behavior of their employees is completely within the authority of the Executive branch.

And, guess what? I’m not an employee of the Executive Branch. Separation of Powers and non-Enumerated Powers. Zero Constitutional authority was granted to the federal executive to mandate my behavior. Since I am not their employee, they can’t police my behavior. The states did not grant that authority to the feds. 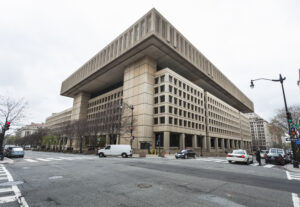 We're from the FBI and we're here to help.

Why? The superior states also did not grant to the inferior federal government “general police powers;” these were reserved by the states. What does that mean? It means the feds can’t “police” me. States reserved police powers, as well as all powers not specifically granted to the feds. See Article 1, Section 8 for a listing of those specific enumerated powers. Healthcare is not among these, nor is any power over what to inject into your body.

See the Ninth and Tenth Amendments – the final two amendments of the Bill of Rights, without which the Constitution would not have been ratified, nor the nation created – for all powers not granted to the feds.

The enumeration in the Constitution of certain rights shall not be construed to deny or disparage others retained by the people. [Ninth]

The powers not delegated to the United States by the Constitution, nor prohibited by it to the States, are reserved to the States, respectively, or to the people. [Tenth]

But, wait, you say? The Executive Branch, via “rule making,” creates arbitrary rules governing individual behavior all the time. True. And yet, the very first sentence of the Constitution reads:

All legislative powers herein granted shall be vested in a Congress of the United States, which shall consist of a Senate and a House of Representatives. 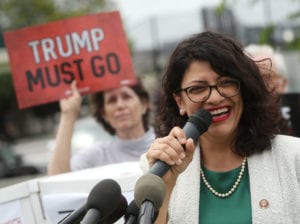 The honorable gentlelady: Congress at work.

Congress loves to dispose of its accountability by tossing too-hot-to-touch issues over to the Executive branch. Say, like a mandate for an injection you may not want to take. Nothing in the Constitution (to which they must take an oath to support in order to be seated in Congress – and should be expelled for violating) authorizes their doing so.

So the feds lack the power to police the behavior of individuals, and the feds must treat all Americans equally, and the president cannot make law. All of these are violated by the vaccine mandate; only Equal Protection is being tested by Arizona.

Now we shall see, again, whether the Supreme Court, also a creature of the federal government and also limited by that same Constitution to the powers and authority that limit the Executive and Legislative branches, is going to find a way to interpret a power the inferior federal government lacks (i.e. “invent” or “usurp”) to the detriment of the states that created the feds as their creature, and to the citizens of those superior states...

… and whether the Constitution and Rule of Law still exist in America.