Over at NR's Capital Matters, Andrew Stuttaford has an excellent post about the costs of Net-Zero for the U.K., which should serve as a bit of a warning for the U.S. and any other country that wants to go down that nutty path.

Long story short, Theresa May foolishly committed the country to achieving Net-Zero by 2050 (Stuttaford describes this as "a last desperate, if unnecessary, effort to ensure that she would be remembered as one of Britain’s worst prime ministers), while dismissing out of hand the Chancellor of the Exchequer's concerns "that such a target would cost £1 trillion and could thus require spending cuts to public services." 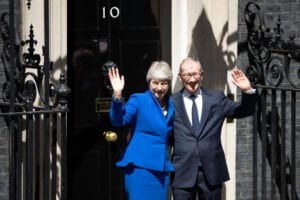 No Maggie Thatcher, she.

Then the entertaining-but-disinterested-in-the-details Boris Johnson became prime minister, and rather than change course, he doubled down. Presumably he thought that this would help the Conservative Party hold on to educated and affluent Britons even as the party brings more working class voters from Labour's traditional heartlands into the fold.

This is, unfortunately, a short-sighted political calculation. Because once the costs start becoming clear, those new Tories will quickly become ex-Tories, and many of the voters this is designed to appeal to will be a lot less affluent.

To focus on just one aspect of Stuttaford's analysis, to make Net-Zero's math almost work, the Johnson government is calling for a 20-fold increase in the number of heat pumps installed annually by 2028, and this "in a country where less than 1 percent of the homes use the technology." Which is to say, there isn't currently a booming industry for their installation. Heat pumps also cost about three times more than gas boilers, but the Johnson government are going to be pressuring millions of Brits to replace the latter with the former. They also take up a lot more space, are more expensive to operate, and work best in well-insulated houses -- not exactly Britain's strong suit.

Johnson and Co. flirted with the idea of banning gas boilers in all homes by 2035, but they quickly backpedaled, recognizing that forcing millions of voters to spend thousands of dollars to adopt an inferior technology to heat their drafty homes was maybe not the wisest course of action for a party that wants to keep winning elections. They've eased up on that timeline a bit, but have remained firm on keeping gas boilers out of new homes, thus inflating building costs at a time when the U.K.'s chronic housing shortage is looking like it will be one of the hottest political issues of the next decade or more.

BoJo would be better off pivoting in that direction, trying to make Great Britain a place where ordinary people can afford to own a home and raise a family, rather than working so hard to get a pat on the head from the global elite who will never forgive him for Brexit anyway.