For a view of civil society’s steady unraveling, few professions offer a better vantage point than that of the police officer. Regardless of how someone may have arrived at a crisis, whether by his own self-destructive impulses or the cruel predations of another, it is the cop who is expected to respond and begin the process of making things right.

Speaking as someone who has spent more than 40 years in the trade, I acknowledge that a police officer’s arrival at the scene of some misfortune is not in every case a blessing to all involved. The amount of help a cop can offer is circumscribed by the available resources in his community, which in most places are limited. And when it comes to dealing with lawbreakers, the cop on the street is merely the usher into a system whose many components are intended to mesh together and deliver justice. For the crime victim, this means seeing the guilty punished; for the perpetrator, it means a sentence sufficient to deter further crime while allowing for the possibility of rehabilitation.

For the cop on the street, the knowledge that reality only occasionally conforms with the theory can be dispiriting, but he knows the pursuit of the ideal cannot be abandoned for inconsistent success. The fight goes on, no matter how dim the prospects.

Or so it was not so long ago. For most of my career, even as crime surged in the late ‘80s and early ‘90s, as the bodies piled up in the morgues and it seemed America’s cities were in irreversible decline, we who worked the streets could find strength in the knowledge that among the political and media elites there was still a desire for improvement if only a way to achieve it could be found.

And a way was found. Developments in law enforcement such as those instituted by the New York Police Department under William Bratton proved that, as Bratton himself is fond of saying, “Cops count.” In 1990, the NYPD investigated a horrifying 2,245 murders. In ten years the number had been reduced to 649, and in 2017 the figure dropped below 300 for the first time since 1951, a remarkable achievement in a city of 8 million people. Cops found great satisfaction in bringing this about.

Now murder and a generalized disorder are again on the rise, in New York City and many other places. But, unlike in the ‘90s, when there was broad societal agreement that something needed to be done to stem the bloodshed, today’s elites turn a blind eye to the chaos on America’s streets in the name of “social justice” and “equity,” terms used to obscure the fact that a disproportionate number among certain ethnicities are committing the majority of these crimes, and that consistent enforcement of the law would necessarily result in a similarly disproportionate number among those same ethnicities going to jail or prison.

And we can’t have that.

So the cop on the street, faced with this escalation of disorder, is left to wonder what he is supposed to do about it. In years past, he was told to go out and find the shooters, robbers, burglars, and car thieves inflicting themselves on their law-abiding neighbors and, if the provable facts allowed, arrest them. Today, a cop who happens upon someone wanted for a crime, or whom he suspects is unlawfully carrying a gun, confronts the suspect at his peril.

Not merely the physical peril posed by a fight or a shooting, for which the cop has trained, but the peril to his and his family’s future should the arrest unfold in anything but a manner preferred by the elites who hold him in contempt. “If I try to stop him,” the cop thinks, “I may have to chase him, and if I chase him, I may have to hit him or, God forbid, shoot him, either of which will be judged by people who seldom if ever have had to make such fateful decisions.” In any violent encounter on the street, especially those in which the racial calculus attracts media attention, the cop knows there is at least some chance that it is he who will be punished for it and not the suspected lawbreaker. 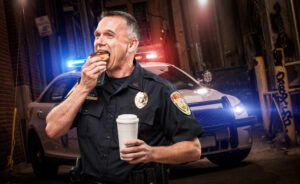 With this in mind, in ever more instances the cop elects to go on his way and allow the suspected lawbreaker to do likewise. In short, the risk-reward calculations favor the criminal, and the results are unsurprising and everywhere to behold.

There was a time I attributed this dynamic to naiveté among political and media elites, whose members I assumed simply could not fathom the depravity in the criminal element to which they are seldom if ever exposed. No more. So rapid has been the rise in crime since the summer of 2020, so inept has been the response from our elected leaders, so willfully blind to both have been the media, it can only be by design.

Call them Marcusians, neo-Marxists, neo-Jacobins, or whatever label you may choose, they have achieved dominance in every last institution shaping popular opinion in America and much of the world: politics, academia, the news media, and the entertainment industry. Recall for example that when Barack Obama first ran for president in 2008, he claimed to oppose same-sex marriage, an opinion considered uncontroversial at the time even among most Democrats. Imagine the uproar that would ensue if a candidate of either party espoused such a position today.

Yes, in the ensuing years a majority of Americans have come to accept same-sex marriage, but they are now being asked – no, compelled – to embrace the proposition that the very definitions of male and female are so amorphous and elastic as to include anyone who, despite his or her immutable biological makeup, fancies him- or herself to be one or the other or neither. And if you dare object, if you voice even the slightest skepticism about this madness, you will be silenced on social media, denounced in the press, hounded from your job, and evicted from your home. 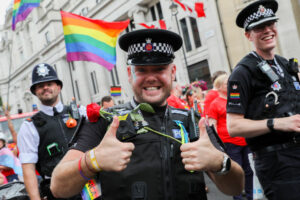 And soon, perhaps, you will be arrested for it. With the police now deterred from taking action against violent crime, police departments will see its most talented officers drift away to other types of employment or to agencies not yet in the grip of this modern thinking. They will be replaced not by crime fighters but by social justice warriors who will take it as their responsibility to squelch heretical opinion.

Do you think it can’t happen here? Witness the plight of one resident of our cultural mother country. Darren Brady, a 51-year-old veteran of the British army, was recently hauled into the dock for having caused someone “anxiety” by retweeting a meme showing four LGBT pride flags arranged so as to form a swastika. As if to prove the very point Brady was making, the Hampshire police came to Brady’s house and arrested him, handcuffs and all.

How long before such a scenario comes to pass here in the United States? The civil society continues to fray. In just a few short years, America’s cops have gone from being active opponents of societal breakdown to helpless spectators to it. The next step, as has already occurred in the United Kingdom, apparently, is their becoming active accomplices in it.