Don't let the headline fool you -- this isn't a post about the Super Bowl of Soccer which the powers-that-be are so eager to make Americans pay attention to. Its about the differing methods of handling obnoxious and disruptive climate protestors.

As Just Stop Oil and other groups have stepped up their anti-civilization tactics, like attacking priceless works of art and laying in traffic throughout Europe, England's police have been criticized for being overly-chummy with them. In London their protests seem to have as many cops standing around the mob (and even chatting and laughing with them) as their are actual protestors. And this for a group that Home Secretary Suella Braverman has labelled  “extremists” whose protests are “out of control.” She's even demanded that police employ harsher measures to bring the protests to an end, but the Bobbies have not complied.

Of course, when the police aren't present, ordinary Brits feel compelled to do the necessary work themselves.

Meanwhile in France the cops just drag them out of the road, even if they've been stupid enough to glue themselves to the asphalt.

These videos depict a conflict which is at the heart of our politics today. On one side is an affluent, privileged activist class and on the other are regular people, just trying to work hard and get on with their lives. The French response demonstrates that its possible to side with the latter, but the Brits are scared of the bad p.r. that would accompany angering the former. Quelle surprise.

What can be said about this, except that they hate all that is true, good, and beautiful?  Fortunately, the picture, which hangs in Britain's National Gallery, was quickly cleaned and restored to exhibition.

Activists with @JustStop_Oil have thrown tomato soup on Van Gogh’s Sunflowers at the national Gallery and glued themselves to the wall. pic.twitter.com/M8YP1LPTOU

The "protestors," who wore T-shirts proclaiming Just Stop Oil and then glued themselves to the wall, were only charged on counts of criminal damage.

A spokesperson for the National Gallery confirmed that there was no damage to the painting, which is one of the iconic versions of “Sunflowers” that Van Gogh painted in the late 1880s. It has an estimated value of $80.99 million.

“There is some minor damage to the frame but the painting is unharmed,” the spokesperson told CNBC. The painting was covered by glass, and it was cleaned and returned to the National Gallery Friday afternoon.

Just Stop Oil has been protesting in London for the past two weeks, and the group said in a press release that its actions were “in response to the government’s inaction on both the cost of living crisis and the climate crisis.”

Cultural vandalism should be punished as harshly as violent crime. There are no good intention or a "higher loyalty" involved, just brainwashed barbarian malice.

With very little planning and a last-minute text to my parents, I hopped a flight from London City Airport to Washington D.C. The reason, of course…to save the planet! With no lounges open, and the risk of delayed takeoff, I thought I should at least grab a bottle of water, and so I did. Hello Boots… one Volvic please!  Only to be reminded that London had launched  something they are calling ‘Plastic Free City’.

They sold me the water alright, but it came with stares from all the really good people—each one of them making silent commentary, and staring at the offending bottle. You’d have thought I’d been going round the globe shoving plastic straws into the brains of dolphins.

Meanwhile, they kept flaunting their refillables like they were iced-out Rolexes. Oh knock it off! I wanted to scream. My entire life is dedicated to green pursuits but when it comes to placing the mouth of a bottle that I’m going to drink from, under the spigot of the community trough—I draw the line. Besides I can’t very well save the planet if I am sick. 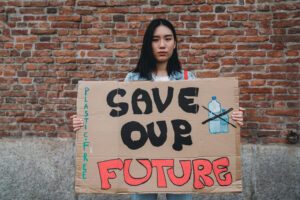 The terminal was lined with bright blue water stations, and I walked to my gate with the gurgle-gurgle of people refilling all around me.  Luckily I had only thirty minutes before boarding and so I stuffed the contraband into my bag before choosing a spot in which to loiter. The airport was mobbed and every announcement was getting on my last nerve. Just then a text from my client…

‘Can we fix this?’ Followed by a picture of the detritus from the Glastonbury Climate Festival. It was disgusting—trash and abandoned tents everywhere. It looked worse than a San Francisco public park.

‘What is it you WANT me to do?’ I texted back.  And before he could respond I texted: ‘Headed to DC…boarding now’.

I could see he was trying to text me something else but I powered down my phone before it came through. Having found my seat I tore off the plastic wrap from my quilt and put my headphones on. I placed the wrap within easy reach of the flight attendant but despite several passes she didn’t pick it up. Why is the whole world plastic-shaming me today?

When we arrived in D.C. our gate wasn’t ready and we had to be towed in. Another delay! I know that towing vs taxiing saves quite a bit of fuel but this delay defeats the purpose of flying from City Airport!

As soon as I powered on my phone the texts started rolling in. Apparently, if you sign up for even one protest they assume it’s your lifeblood and include you in every update. I only wanted the EPA protest. What a mess. 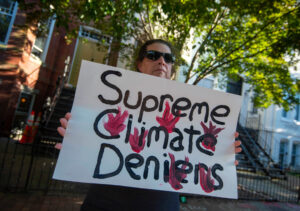 My driver did his best to get me right where I needed to be but it was hopeless. Pride marches, GenX, and half a dozen abortion marches. Finally, I headed toward a group in green bandanas knowing this would be my group, but it was not. This was made readily clear by a “Viva la Vulva” sign. I stepped out of the throng and asked a woman why green for pro-abortion?

‘Marta tells us that the colour of nature was chosen because it signifies life’, she said.

Abortion means  life? I dared not ask. And who was Marta? Turns out Marta is the founder of Catholics for Choice, 'a nonprofit organization that lifts up the voices of the majority of Catholics who believe in reproductive freedom'. I squinted my eyes and walked away.  So far I had accomplished exactly nothing.

Then my phone rang. It was my father.  ‘OH HEY!’ I said, yelling into my iPhone.

‘You bloody well know I am not at a club!’ I responded. I am in Washington, protesting the EPA ruling!'

‘Well how’s that going?’ he asked.

‘I haven’t found them yet… this is all rather confusing. But I do have a question, I got a text about the Glastonbury Climate Festival… I see electric- car chargers in the middle of… nowhere. So how do they get powered?’ 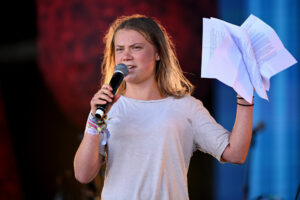 ‘Yes, as you said, all very confusing. Listen, sweetheart, do you really think protesting is a good use of your time…?'

‘How would I know?  ‘I haven’t even been able to even locate my protest'.’

‘Strange that, Marxists are generally so good at organisation’.

I didn’t have the strength to fight him. It was beginning to rain and I decided to keep quiet in case he had one more zinger in him.  FINALLY I could see my EPA group and I ran to catch up with them, only to ask myself why had I bothered? I was sweating under my trench, my shoes were soaked, we all looked stupid, I felt stupid—this was stupid.

‘You win, Daddy', I said into the phone. 'This was a dumb idea. I will schedule some meetings and ask my clients how I can be useful while I’m here’.

‘Excellent', he said. 'And you might advocate for the continued operation of Line 5 up in Michigan —it's an essential  pipeline for Eastern Canada and the U.S.’

‘And they will listen to me because—why?’ I asked.

‘Because you’re the voice of reason on this. It’s a win for everyone.  And you’re still advocating for the environment - just without the Marxist slant’.

‘Oh, just tell them they’re all going to freeze—they don’t even have enough energy to get through next year…’

‘I don’t think they want to hear that’.

‘Oh I disagree, Jennifer. Fear-mongering is the only thing you green-niks understand'.

I hung up and looked around. The rain was pelting harder. Everybody looked miserable. And they wonder why I never bring anyone home!