The nastiest side effect of China's gift to the world, Covid-19, was not the illness itself, nor the deaths (surely over-attributed) it caused primarily among the aged and infirm. Nor was it the unnecessary and unconstitutional lockdowns that accompanied the government-fueled, manufactured authoritarian panic, along with the arbitrary abrogation of fundamental constitutional rights, including those protected under the first amendment: freedom of speech, assembly, and the free exercise of religion—a national disgrace that will live in infamy, and which should never be forgiven.

Nor was it the incalculable economic destruction caused by this unholy concoction of Chinese bat-butt soup, liver of pangolin, and gain-of-function seasonings provided by Chef Boyarfauci, nor the loss of several years of schooling for America's increasingly ineducable youth. Nor even was it the semi-mandatory "vaccines" that don't fulfill any of the traditional metrics for real vaccines, including prevention of disease and its transmission or the granting of future immunity; now the argument has moved to whether they actually kill people, which isn't an encouraging trajectory for something billed as a panacea.

No, the worst damage has been to our political-electoral systems, as the results of the past two elections have made abundantly clear. Forget the nonsense about a "stolen" election; all elections are "stolen," if by stolen you mean that one side won and one side lost, and have been since George Washington Plunkitt was a pup. (For those keeping score at home, Tammany Hall, of which Plunkitt was an outstanding exemplar, was founded by Aaron Burr, the first Democrat Party vice president, national traitor, and murderer of Alexander Hamilton.) Whatever the election rules are—and under our unwieldy system, there are 50 different sets of them—the party that manipulates them best usually wins. And this of course gives the long-practiced Democrats an enormous advantage.

The fundamental principle of all American elections has been to determine as far in advance as possible how many votes the other guy is getting and then come crashing in at the end with overwhelming numbers of newfound votes to close the deal at the finishing bell. You can find them in storerooms, in the trunks of cars; sometimes they fall off trucks, mimeographed and marked in advance to save the poor voter's time. You do whatever it takes, more or less within the limits of the law, and then worry about penalties after the election is safely in the bag.

Permission vs. forgiveness: the fraud, dear Brutus, lies not in the machines but in our electoral system. There is only one way to ensure a free and fair election. But before we get to that, consider this:

Democratic norms are not perfectly realized anywhere, even in advanced democracies. Access to the electoral arena always has a cost and is never perfectly equal; the scopes and jurisdictions of elective offices are everywhere limited; electoral institutions invariably discriminate against somebody inside or outside the party system; and democratic politics is never quite sovereign but always subject to societal as well as constitutional constraints... There is much room for nuance and ambivalence... [and] bending and circumventing the rules may sometimes be considered “part of the game.”

Part of the game? It is the game. There is no perfect "democracy." The system is, in fact, the steal.

One of the Democrats' favored weapons a century ago was the Repeater, the man who voted in multiple districts under various names, a la today's college students, illegal aliens, single cat ladies with toxoplasmosis, and forgetful suburban wine moms. When the opposition (here called the Fusionists) tried to do the same thing, they would easily be caught out; one thing the GOP never has been any good at is being a criminal organization masquerading as a political party. It just doesn't have the talent for it:

The Fusionists make about the same sort of a mistake that a repeater made at an election in Albany several years ago. He was hired to go to the polls early in a half-dozen election districts and vote on other men's names before these men reached the polls. At one place, when he was asked his name by the poll clerk, he had the nerve to answer "William Croswell Doane."

"Come off. You ain't Bishop Doane," said the poll clerk.

"The hell I ain't, you—I" yelled the repeater.

Now, that is the sort of bad judgment the Fusionists are guilty of. They don't pick men to suit the work they have to do.

And what is that work? Why, winning elections, of course. Power and the lust for it is the only constant in political systems, even democracies. The Greeks were just as mad for dominance as any Roman consul; Periclean Athens was no idyll. Further, there is little or no proof that "democracies" are inherently superior to other forms of government, Churchill's silly formulation to the contrary notwithstanding. European democracies differ greatly from the American version, as do the Chinese and North Korean versions.

Nor is there any compelling practical argument in favor of universal suffrage; slaves, women, and male teenagers were not allowed to vote either in Greece or Rome, nor would they be for almost 2,000 years. Voting was generally limited to property owners, those with a financial stake in their society. As we'll see next week in my column about the history and effects of the 19th amendment, the expansion of a fetishized franchise ("sacred right," etc.) created at least as many problems as it solved. To the question of universal suffrage, "because" cannot be a satisfactory answer.

But unless the vote is given to toddlers, numerate chickens, or articulate dolphins, there are no more worlds left to conquer on the universal suffrage score. Covid, however, gave the Left whole new worlds to conquer: instead of expanding the franchise they simply expanded the time available to exercise it. Originally sold (as usual) as a "compassionate" and "fair" redress for the poor, the sick, the out-of-town, and those unable to read a calendar, mail-in and other forms of passive voting have now taken over the system:

The biggest issue for election administration in 2020 was the pivot to voting by mail throughout the country in response to the COVID-19 pandemic and the accompanying importance of de-densifying in-person voting. This need led many states to increase opportunities for voting by mail, ranging from expanding the accepted reasons voters could list for requesting a mail ballot, to mailing ballots to all registered voters. As a consequence of these changes, the rate of voting by mail in 2020 doubled from 2016.

That's not the worst of it. Friendly judges across the land threw out challenges to mail-in/absentee ballots on the niggling grounds that they weren't properly executed; worse, "ballot harvesting" allowed dumps of completely untraceable "votes" into random drop boxes, and lax counting regulations (differing from state to state) meant the suspect ballots could be quickly mingled into the legitimate-vote population. Add to that the arbitrary decision regarding the latest moment that ballots could be accepted even after the real polls had closed and you have a recipe for a perfectly legal steal. 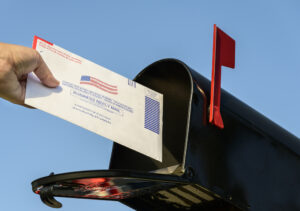 Voting for fraud, not for democracy.

So while you’re complaining about the results of the last two elections, remember that in many states votes were cast weeks or even months ago. Those votes heavily favored the Democrats, which in part accounts for the election of a bona fide rutabaga as the new senator from Pennsylvania. Further, as long as one side can mail in—or worse, "discover"—an unlimited number of ballots or votes on thumb drives of uncertain provenance, with little or no chain of custody, and the other side appears in person with ID to vote once on election day (as Republicans tend to do), the former is always going to beat the latter. No cheating necessary! The Steal is built into the system.

The only chance we have of recapturing our Republic is to return to real voting: one day, one man, one vote, in person, with identification, on a paper ballot, and getting a purple finger in return to prevent Repeaters. No early voting, no late voting, no drop boxes, no "curated" votes, no harvested votes, no absentee ballots for any reason other than active-duty military overseas. If you're sick and can't get to the polls, tough. If you've moved out of the country, tough. Anything else is not an election, but a rolling plebiscite whose parameters can be adjusted on a whim and which therefore renders elections functionally meaningless. And if you don't think so, ask yourself why, with control of the House of Representatives currently on knife edge, votes are still being counted in Democrat-friendly California.

Citizenship ought to entail at least as many responsibilities as it does benefits. There's no right to vote in the Constitution: it has to be earned, not demanded. It's not for everybody (nor does everybody even want it): it shouldn't be for wards of the government, the criminal, the insane. Nothing encourage indigency like being able to vote yourself a raise with other people's money.

If the franchise is really "sacred," let's start acting like it. The country would be a better place, the government would be more honest, and we'd no longer have to endure now-constant accusations of fraud from both sides. Who wouldn't vote for that?