Recall the original message? Green energy is more costly than conventional energy. But, they said, much less costly than the climate catastrophe awaiting if nothing were done. A problem arose. Surveys showed that while people naively went along with the prospect of using green energy, they were unwilling to pay for it. I know what to do, some bright spark probably exclaimed, deep in the bowels of Renewable Energy Inc, we’ll tell them it’s cheaper.

Thus, in a far-off land called Oz, opposition leader Anthony Albanese (Albo) promised voters, no fewer than ninety-seven times, that his green plan would reduce electricity prices for families by an annual $275 by the year 2025. And so it came to pass that Albo and his Labor Party mates were elected to power in May this year.

It’s hard to get a representative national reading on electricity bills, which vary markedly between states. However, a Sydney family (Ma, Pa and two kids) would pay something like $1,800 a year. During the time Albo was campaigning, bills were already rising, putting his fanciful promise in peril. Still, he was resolute; confident in the modelling behind his plan. After all, as he kept on saying, and keeps on saying, renewables are the cheapest form of energy. Ergo, as a matter of unassailable logic, more wind and solar equals cheaper power. And don’t believe your lying eyes, whatever your bills might say. 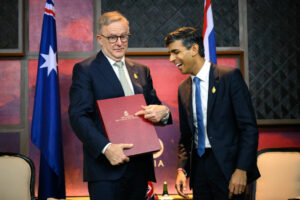 Albanese and Dishy Rishi yukking it up at the G20 in Bali.

It's not propaganda on Albo’s part. Might have started that way. Now he undoubtedly believes it. I suppose if you tell others a demonstrable lie enough times it becomes your truth. Haven’t tried it personally. Never been a politician or used-car salesman.

But the jig is up. Federal budgets in Australia are usually brought down in early May. The new Labor government couldn’t wait until next year, bringing down an interim October budget. That was probably a mistake. In the budget papers, Treasury projected that electricity prices would rise 20 percent over the balance of 2022-23 and another 30 percent in 2023-24. Yikes, that doesn’t sound like a reduction of $275.

Clever people in the media (the majority caught on eventually) realized that 20 and 30 percent compounded to 56 percent. At that rate an $1,800 bill rises by over $1000; instead of falls by $275. Not an easy discrepancy to explain away, even for practiced snake-oil salesmen. What to do? What would Biden do? Blame Trump and Putin of course. Albo and his mates didn’t disappoint. Years of mismanagement by the previous government is behind this they said, and also that slubberdegullion Putin. They didn’t actually say slubberdegullion; but they might well have, if they’d found the word as I did.

What would they do without Putin? These days, he’s behind the undoing of all the best-laid green schemes. Think aptly of Snowball, George Orwell’s porcine character. Orwell is perhaps too often brought into the frame. Yet his work is so unmissably prescient. The interchangeability of truth and lies in 1984 thrives in real life among those pimping climate-change catastrophe. And then there’s the fall guy Snowball playing Trotsky (yesteryear’s Putin) in Animal Farm, blamed for all ills.

Befitting a leftist government, the new Australian Labor government foresees budget deficits without end; with gross public debt exceeding $1 trillion by the end of June 2024 and progressively rising from there on. That might seem small compared with America’s $31 trillion debt, but you have to multiply it by 13 to get a per-capita comparison and, of course, the USD is the world’s reserve currency – quite an advantage when you owe money. It is glaringly discernible, not disputable; leftist governments incorrigibly spend money they don’t have to buy votes. Democracy would fall without right-of-centre governments periodically repairing the fiscal ship of state. In fact, that now seems to be their only function, having largely ceded away civil society to Marxist mobs.

Spendthrift governments often spend money outside of the budget to disguise their profligacy. In Australia’s budget, $20 billion (more than half the size of the projected deficit for 2022-23) is designated as low-cost finance, and therefore off-budget, to fund 13,200 kms of new transmission lines and pylons. Connecting far-flung wind and solar farms to grids is an expensive exercise. And, in this case, a forlorn one. 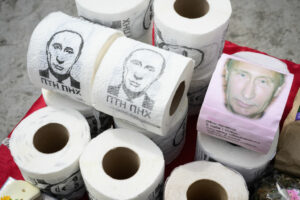 First, it can’t be done. There is nowhere near the skilled manpower to the job. To boot, objections are already being made by landowners to having large pylons and wires strewn across their land. Lawfare awaits. And then there’s the little matter of building the many and massive wind and solar farms from which the transmission lines sprout. It’s make-believe.

Second, whatever part is built is bound to be well behind schedule and way above cost. It’s a government project. Take the white elephant, Snowy 2.0-pumped hydro. When will it be built? They said by 2021. Assume 2028 at the earliest; that’s if it’s ever finished at all. And the cost? They said $2 billion. Assume something northwards of $10 billion or, more probably, $15 billion.

There is much else about “cheaper, cleaner energy” in the budget. For example, $157.9 million is provided for a “National Energy Transformation Partnership.” All hat and no cattle, sums it up.

…the Government will work together with state and territory governments on priority actions to support the transformation of Australia’s energy sector. Initial priorities include delivering Australia’s first fully integrated energy and emissions reduction agreement, introducing an emissions reduction objective into the National Energy Objectives, accelerating mechanisms for the uptake of flexible energy supply and progressing a co-designed First Nations Clean Energy Strategy with First Nations communities.

Blah-blah-blah. Lots of taxpayer loot to produce yet more grandiose bumf. Not one kilowatt of power. And, by the way, Australian Aboriginals never constituted Nations. Hundreds of stone-age, hunter-gatherer, thinly populated itinerant tribes were not remotely nations. Part of the lies that now inform Australia’s national life. Fitting in this era of climate hysteria and green-energy boondoggles.